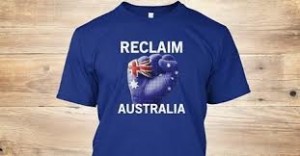 I have a Facebook friend with whom I converse about many things from poetry to politics. Friday night he asked me if THE AIMN would publish some information about a group he was involved with. I said I would consider it after I looked at the Facebook page. I went to the Reclaim Australia and was horrified at the blatant racism of it. It is supported by the likes of Cory Bernardie, Janet Albrechtsen and Pastor Danny Nalliah.

I noted that they were having rallies this weekend all over Australia.

I got back saying that I was horrified that he could be involved with such an obvious race hate group and that I had in fact shaken the hand of Nalliah and I could feel the evil of his touch.

His group is called Reclaim the REAL Australia.

Consequently I asked him to send some information.

We were horrified to become aware of a march across Australia designed to vilify Muslim Australians. We created our page to try to create a focal point to oppose and expose this hate movement.

The Reclaim the Real Australia page began as a response to the Reclaim Australia Rallies instigated by Sherman Burgess. Its aim from the beginning was to counter the claims and misinformation put forward by those who wished the support of ordinary Australians.

Their claim was based on the perceived fact that this country was being “overrun” by Muslims who wished to introduce Sharia Law and destroy our way of life.

As we looked at each of their claims, it became obvious that behind their much vaunted “love of Australia” was a wholly racist and bigoted agenda, with the open support of such self-proclaimed Neo-Nazi groups as the Australian Defence League, The Australian Patriot League and overseas groups such as Golden Dawn and The English Defence League

We started reporting on the things being said on their pages, including things like people boasting about taking loaded guns to the rallies, wanting to kill all Muslims and so on. These threats don’t tend to appear on the Reclaim pages since Facebook shut down Shermon’s first page, but the pages that hang off this movement all feature them.

We started thinking we wanted to encourage counter rallies, and while these have popped up on their own, we soon decided not to encourage them, due to the credible threat of violence.

There’s been a lot of incredible claims from the Reclaim camp, including a situation where someone provided supportive pages with evidence that Shermon had pretended to receive a letter claiming the left hates ANZACs and likes to desecrate their graves and shrines, a letter he read out to an outpouring of fury and threats. He’s been very active in trying to identify people who run pages opposing him, and has several times posted what he thought were people’s personal details, in order to get an angry mob started, and then pulled them down before Facebook can act. His followers have filed fake reports against our pages to get them pulled down. Every step of the way, they’ve sought to silence any voices speaking against them, by abusing the systems of Facebook and making direct threats of violence.

We were also surprised to see that some of our politicians seemed to support their aims. People such as. Andrew Laming, Jacqui Lambi, Cory Bernadi, George Christensen, and Bronwyn Bishop.

At some point in time each of these people made public statements against the wearing of a Burqa or halal certification.

As well, Craig Kelly used a picture of Christian Copt girls at their First Communion to Illustrate a story of child marriage which he incorrectly claimed was an Islamic practice.

We know that Shermon has belonged to neo Nazi groups. In fact, a neo Nazi group creates his videos. He is a member of the Australia Defence League, an extremist group that has seen members sent to prison for inciting violence. He is also infamous for his band, Eureka Brigade, and their songs advocating killing refugees and so on. We are at a loss to understand why anyone thinks he’s a picture of traditional family values, in fact, he has a long history of belonging to extremist groups, Reclaim Australia is his attempt at a make over to attract popular appeal. However, his guest speakers are all extremists on the lunatic fringe, and that seems to typify his group.

Ultimately, he’s exploiting a fear and uncertainty that exists because we all know terrorism exists, and some people don’t have the experience or wisdom to place these things in a logical context, and find it easy to assume that all Muslims are out to kill them. We certainly understand their fear, and the thought processes that lead to it, but it’s a real pity that so many people have been caught up in this web of fear and lies and not stopped to think logically about the claims being made. The actual demands of the march are impossible, without overthrowing the constitution, because they require an end of freedom of religion in Australia, they essentially require Islam to be illegal.

We looked at their various posts designed to portray Muslims in a negative way, and answered with positive stories, pointing out the impossibility of instituting sharia law, as it would be against the constitution, that halal certification helped the Australian economy, and that the negative stories they were posting about Islam were either cultural – not Islamic, or had no relevance to Australia or Australian Muslims.

Finally our aim now and in the future is to show that Australia is a multcultural country and that we welcome and embrace people of all races, colours, and religions.

The marches claim to be only about extremism, but we have screenshots of Shermon abusing people for suggesting there are moderate Muslims and they share plenty of memes suggesting that the extremist carries the bomb, and the moderate lights the fuse and cheers. Shermon at one point suggested Muslims would be welcome, if they carried a sign saying they were a Muslim but they rejected the Quran. This is clearly an incredible suggestion, as is the idea that anyone would march with a group that wants to destroy their way of life, but it seems logical to them that anyone who does not accept, is a terrorist (they actually said this).

If you need any other material (like examples of the threats we’ve received, or for us to dig some things out of the page, if there’s specific things you’d like to see), just let us know. Here are a few links to specific items you may find interesting:

A meme from the Reclaim pages claiming Muslims were not here 50 years ago:

Another rally is found to have lied about council permission:

A petition from Shermon from four years ago about Muslims banning Christmas: