Capitalism (as we know it) is in Crisis, and it is going to fail!

We live in an increasingly brutal economy. Almost everything is granted or denied on the basis of your ability to pay. If you have the cash you get the service, if not you get nothing. The economy just doesn’t care if you are homeless, hungry, sick, war wounded, traumatised or retrenched. It only cares whether or not you can pay.

The system pits us against each other in an endless quest for money, and it encourages us to view our fellow humans as either a means to increase our personal wealth, or as a potential drain on it. This is the stark reality of living in an economy rather than a society.

But given that this is the system we live in, and we all need money to survive, how exactly does one make ends meet?

The easiest way is to be born into a family that has enough resources to feed, house and pay for a good education for you. However if you fail to secure such a birth then I’m afraid your chances of wallowing in poverty are astonishingly high, no matter what country you were born into.

You could enter the “labor market” and sell your time to the highest bidder. While this works reasonably well for some highly educated folk, unfortunately education has become extremely expensive of late, and often only results in a massive personal debt with no prospect of a job at the end of it. You could of course forgo education and seek out unskilled work, but the drive to ever-decreasing levels of service and ever-increasing mechanisation has created a large reserve of unemployed, which keeps the price of human labor cripplingly low. (This fact is vividly on display in places like Bangladesh or downtown USA, where a person can easily work a gruelling 60 hour week and still fail to make enough money to eat well and rent somewhere semi decent to live).

There are of course the much-touted inspirational tales of those who start out with nothing and work their way to the top. But what are the odds of such a meteoric rise in status, especially if you had the misfortune of being low born in a 3rd world country? Suffice to say we are talking odds that would make a lottery ticket look promising. Even if you were blessed with the brains of Einstein and worked like a proverbial dog, without the right start in life you’re pretty well screwed.

For most people the system as it stands is precarious enough, but when you factor in the disruptive force of mass mechanisation that is hurtling towards us at break neck speed, it’s pretty clear that without major structural reform things could get much worse very rapidly. 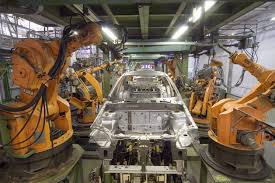 There is credible research out there suggesting that up to 40% of Australian Jobs could disappear by 2025. That is LESS THAN 10 YEARS PEOPLE!

For the first time in our history we look set to run head long into the ultimate capitalist paradox. You know, the one where the .01% has everything and no one else can afford to buy anything, which rapidly brings the whole thing to a grinding halt. It’s the classic end to every game of Monopoly ever played. One person is filthy rich and smilingly self-satisfied, and everyone else is broke, resentful and threatening to up end the board. Like it or not robotics and automation are on the rise right across the globe, & HUMAN EMPLOYMENT IS STRUCTURAL DECLINE. Just last week Adidas announced it was going to open new fully automated ‘robot’ factories to make shoes. The driverless cars and trucks are coming people, and no matter how much the LNP might wish it, the attendant tsunami of unemployment is not going to be halted simply by tinkering with the company tax rate.

We are talking about four out of ten Australians potentially losing their jobs within a decade. And even if our job is safe, we need to understand that every new face on the unemployment line, every 457 visa granted to an underpaid Chinese worker puts Australian wages and conditions under increasing pressure. And as wages contract people’s disposable incomes shrink, and as people’s incomes shrink demand falls away, and as demand falls away profits start to fall, and before we know it we are in a full blown recession, or worse.

One thing is for sure; this slashing of labor costs due to mass mechanisation is NOT going to result in GROWTH for anyone but the 1%, (and even that growth could be very short lived if no one can afford to buy what they are selling).

We also have to take into account the massively increased cost of welfare, policing, and health care as record unemployment, increased crime, depression, addiction and ‘unforeseen’ climate events starts to ripple throughout the land.

This crisis is real, it’s on the horizon, and left to run its course it could get pretty damn ugly.

We are fast entering uncharted waters. Never before in human history have we had the capacity to produce so much, while having so many people that are just not needed to do the work. And the frightening truth is, no one really knows exactly how this is all going to play out.

How do we address a situation where a large percentage of the population is not able to earn enough to feed and house themselves? We can’t continue to blame and demonise them. After all it isn’t their fault the robots took their jobs. 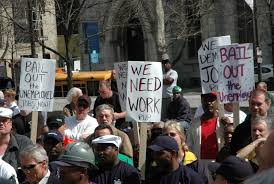 So what the hell do we do? Do we kill the unemployed; do we turn them into thieves and criminals? Do will build gated communities so we don’t have to watch them quietly starve? Do we all start carrying guns to shoot them if they try to take our stuff? Seriously, what do we do?

There is only one humane answer. We have to reconfigure the model of distribution. We need to start a conversation about introducing some kind of UBI (Universal Basic Income). A UBI is, in short, a no questions asked basic livable stipend given to all citizens regardless of any other income. 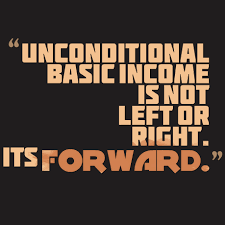 I know this is a big leap, and it goes against the grain for many, but what other choice is there; war, famine, mass homelessness?

We have to accept the fact that 40 hours well paid employment is not going to be a viable or achievable expectation for many people in the very near future. We also need to understand that for big and small business to survive people need to be able to afford to buy their goods and services.

The first question most people ask is “but how can we afford it?” While the answer is not yet clear, here is what we do know; if we are to afford it then we will probably need to be taxing companies MORE in the near future, not less. (or at the very least get them to actually pay tax at the headline rate rather than allow them to continue using convoluted off shore structures and tax havens to avoid it).

Sure, in the short term tax cuts might fuel investment, but is Coles investing in automated checkouts, or McDonalds installing a touch screen automated ordering system, or banks adding more automation to their systems, or taxi companies going driverless really going to employ more people? Or is it simply going to strengthen their company bottom line and thus reduce what they cycle back into the community?

Change is coming and we need to start discussing what the hell we are going to do to avoid complete social collapse in the face of massive, unprecedented underemployment. 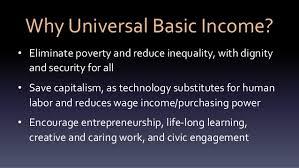 And I am sorry to say it Mr Turnbull, but your long debunked, trickle down ‘jobs and growth’ tax cut for companies is a lame duck policy that simply fails to grasp or address the structural changes that are upon us.

You will be hearing a lot more about UBI’s over the next few months and years, (they are already being discussed and trialled in parts of Europe). And if we are to avoid a social/humanitarian disaster we need to start reframing the conversation.

The wave is coming, and we either learn to surf it or we are going to drown.