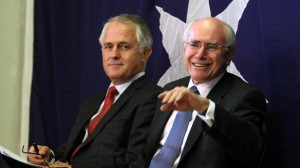 Tony Abbott promised to do many things if the LNP won the 2013 election. One of these, which was no doubt driven by populism and not policy (like everything else), was his promise to hold a judicial inquiry into Julia Gillard’s actions as a lawyer. He hammered this issue relentlessly during the campaign. Not content to simply ‘ditch the witch’ he wanted to conduct a political witch hunt of his own into irrelevant matters that were played out almost twenty years ago; matters that meant absolutely zero to the country. Most of us know of course that those matters mean absolutely zero in this present day as well, but that’s another story. Twenty years later, on this irrelevant issue:

Mr Abbott insisted again that Ms Gillard had committed a crime in her role of providing legal advice to incorporate an association for her then boyfriend and Australian Workers Union Victoria state secretary Bruce Wilson.

Abbott had no doubt been buoyed by poll after poll showing that voters questioned Ms Gillard’s explanation of the matter, hence his race towards tacky populism.

He of course ran the risk of being exposed as an utter fraud if the judicial inquiry turned up nothing to support his favoured exercise of fear and smear. But it would never deter him from practicing current day populism. History now shows – or is presently being played out – that the inquiry has turned into a ‘monumental failure’, as reported by Peter Wicks. It joins Abbott’s ‘own goal’ with his farcical Royal Commission into what he shrilly keeps calling the ‘pink batts fiasco’. He loves the smell of blood.

Given that he is keen to exert his time and money on judicial inquiries – witch hunts – I have a mere handful of instances of where he might want to hold witch hunts on whose episodes are more recent than Julia Gillard’s alleged criminal behaviour 20 years ago and whose outcomes would certainly be of national interest.

Below are some of the witch hunts Mr Abbott should take the time to pursue (as the man displays an obvious fetish with them). Long-term readers might recognise that I have raised these before, but given that witch hunts have been dominating the news over the last few days, raising them – and the manner in which they were quickly and conveniently swept under the carpet – further show that the current witch hunts are nothing but political opportunism.

So, Mr Abbott, what about these?

Please take a look at John Howard’s lie that Iraq had weapons of mass destruction. We entered into an illegal war based on that lie. We ordinary Australians are more interested in the lie that cost this country billions of dollars and the thrashing of our national pride. We, as a country, are still shadowed by that war, whereas Ms Gillard’s alleged actions were almost 20 years ago. Let’s have some priority.

The AWB Oil-for-Wheat Scandal refers to the payment of kickbacks to the regime of Saddam Hussein in contravention of the United Nations Oil-for-Food Humanitarian Program. AWB Limited is a major grain marketing organisation based in Australia. For much of the twentieth and early 21st century, it was an Australian Government entity operating a single desk regime over Australian wheat, meaning it alone could export Australian wheat, which it paid a single price for. In the mid-2000s, it was found to have been, through middlemen, paying kickbacks to the regime of Saddam Hussein in exchange for lucrative wheat contracts. This was in direct contradiction of United Nations Sanctions, and of Australian law. Mr Abbott, please take a look into how the Howard Government – of which you were a member – were entangled in this reprehensible act. Please also ask your former Foreign Minister Alexander Downer, who knew ‘nothing’ of the affair, if it is true that his staff removed 11 wheelie bins filled with shredded documents from his office the morning after losing the 2007 election. Perhaps you could put an end to the rumour that circulated Canberra about the contents of those mysterious bins.

Mr Abbott, do you remember this?

In a speech that Mr Turnbull gave in Perth it was reported he “ . . . decried the state of political discourse in Australia, saying it had deteriorated to such an extent that the nation suffered “a deficit of trust” and there was an urgent need for honesty in politics.”

Despite all that preaching he then refused to answer a number of questions in relation to a grant he gave when he was Environment Minister in the Howard government to his friend Matt Handbury. Mr Hanbury, co-founder of the Australian Rain Corporation and nephew of the News Corporation chief, Rupert Murdoch, you might recall, contributed to Mr Turnbull’s electorate fund-raising machine (which was set up in 2007).

Mr Abbott, do you remember Mr Handbury’s company receiving a $10 million grant from Mr Turnbull when he was Environment Minister not long before the 2007 election? $10 million of tax payer’s money.

A witch hunt may jog your memory. And what an amazing coincidence that he is related to Rupert Murdoch.

Mr Abbott, in 2000 your old boss decided to help the retrenched workers of National Textiles to recover their entitlements after the company, of which Mr Howard’s brother Stan was Chairman, was placed in the hands of an administrator.

It was reported at the time that it was Prime Minister Howard:

. . . who proudly announced that the cash-strapped National Textiles’ workers would receive their full entitlements. It was the Prime Minister who said they would be the first to recover wages, leave and a redundancy payout under a new National scheme and it was the Prime Minister who urged the creditors to accept a Deed of Arrangement so that the $6 million in State and Federal funds would flow.

. . . the Australian newspaper claimed that acceptance of the scheme would prevent an inquiry into National Textiles’ management and Directors, of which Mr Howard’s brother, Stan, is one. The editorial was scathing, raising questions about the government’s probity and calling the taxpayer funded bail-out improper, and policy on the run.

The then Opposition called for an inquiry but it went nowhere (naturally). Mr Abbott, given your carried-out promise of a witch hunt to dig up Julia Gillard’s past perhaps you’d be moral enough to do a bit of digging dig into this shady deal as well. Strike while the witch hunt iron is hot!

Future governments will no doubt be in overdrive holding Royal Commissions into the wealth of material this current government is providing us with – hopefully some of those might get to the truth behind Ashbygate or dodgy donations – but as I have pointed out, there is a lot of old stock to clear off the shelves first.

Mr Abbott is not the only one who smells blood; so do I. His. And his party.