Today marks the tenth anniversary of Julia Gillard becoming Australia’s first female Prime Minister. As an ‘insider’ (she was my boss) I can attest that she spent her time as Prime Minister – and as a Minister before that – working tirelessly for a better Australia, but more importantly, for the average Aussie.

Thus it was disheartening, disappointing and frustrating to see the picture of Julia Gillard painted by the Murdoch media and an opposition led by Tony Abbott. It was pure cruelty.

Two articles I wrote for the now defunct Cafe Whispers blog; Not your average Aussie and The shout heard ’round the world reflected her mistreatment. I would like to share those articles with you.

Not your average Aussie

In saying that ‘loudmouth mining magnates shouldn’t dominate public debate more than a nurse or a childcare worker’, Julia Gillard is telling Gina Rinehart and Clive Palmer that they are just average Australians. And in doing so she has shown that she herself is not an average Australian. She is better.

In her two years as Prime Minister, despite her red hair, long nose, big bum, Welsh accent, toxic government, battles with faceless men, unmarried status, daily media attacks, daily leadership speculation, bad polls, hatred inspired by the shock jocks, hatred inspired by Tony Abbott, witnessing the denigration of Parliament by the Opposition, countless cries that she should be kicked to death or tossed overboard, and despite placards littering the countryside that she’s a bitch, despite the money coming in from big business funding campaigns aimed at destroying her and the countless lies that condemn her – she has stood firm in the face of this onslaught. And in standing firm, to me, she is standing tall.

As far as having guts goes, she is better than the average Australian.

She stands by what she believes in and in two years her position hasn’t changed. She believes that something is happening to the climate and she wants to do something about it. She hasn’t ignored the overwhelming evidence from the climate scientists that something bad is happening and nor has she mocked the messengers. She’s listened. She’s learned. And she wants to do something about it. She will not change her stand to please big business or anybody else for that matter. Her heart is with the country, not the few that wish to destroy it or those politicians who prefer to brown-nose the likes of Gina or Clive.

As far as sticking to her beliefs and wanting to make this a better country, she is better than the average Australian.

That, briefly, is my opinion.

In Tony Abbott we have a politician who does not have any of the qualities I’ve mentioned that stand Julia Gillard out from the crowd. To me, he is worse than the average Australian. There is not one belief he will stand by (except that he can stop the boats) but I won’t go into that. I’m sure you lot will.

Julia Gillard might have stopped shouting at Tony Abbott but her words reverberated around the world.

Hence this post is not about the speech by Julia Gillard or about the man it was directed to, but briefly on the impact of it.

By now most of you would have digested some of the more celebrated responses – including those linked above – so I won’t cover old ground, however, one is worth mentioning; not for Julia Gillard’s stand against misogamy but for her often overlooked performances as a gutsy politician. The New Yorker wants performances like that to enter into American politics. They write:

So why is this among the most-shared videos [the Julia Gillard attack on Tony Abbott] by my American friends today? Purely as political theatre, it’s great fun. Americans used to flipping past the droning on in empty chambers that passes for legislative debate in this country are always taken in by the rowdiness of parliamentary skirmish. It could also be that the political dynamic depicted in the clip parallels the situation in the States: a chief executive who is a “first” took power after a long period of control from the right of center, and whose signature policy achievements have at times been overshadowed by personal vitriol. Or perhaps it’s that we are right now in one of the rare periods every four years where the American political process provides actual face-to-face debate between the leaders of the two parties. After his performance last week, supporters of President Obama, watching Gillard cut through the disingenuousness and feigned moral outrage of her opponent to call him out for his own personal prejudice, hypocrisy, and aversion to facts, might be wishing their man would take a lesson from Australia.

Similarities between our two political theatres abound. Julia Gillard has found a way to evolve from it.

But her attack on misogamy has attracted more responses than her parliamentary grunt. And oh how the responses differ. In one corner we have the international media, the social media and social analysts supporting her speech while in the other corner sits the Australian mainstream media going alone in its condemnation.

To hear the praise coming from Australians one has to read an overseas newspaper. For example, the Irish Times provided a better and more balanced appraisal of Julia Gillard’s speech than that dished up locally. Where, in the Australian media, will you read such honesty as this?:

When Australia’s prime minister, Julia Gillard, told the opposition leader, Tony Abbott, this week that if he wanted to know what misogyny looked like he should pick up a mirror, it was seen by many women as a defining moment for feminism in the country.

“I almost had shivers down my spine,” said Sara Charlesworth, an associate professor at the University of South Australia. “I was so relieved that she had actually named what was happening. She was so angry, so coherent and able to register that enough is enough.”

It was the first time an Australian leader – and possibly any world leader – had delivered such a forthright attack on misogyny in public life.

“That the sexism which is so deeply embedded in the Australian body politic was named may give some women licence to express and seek to counter the sexism they have experienced in their working lives.”

According to the Australian Human Rights Commission, one in five Australian women has experienced sexual harassment in the workplace. A recent study by Monash University in Melbourne showed that 57 per cent of women who worked in the media had experienced sexual harassment. It said women were badly under-represented in top levels of media management, holding 10 per cent of positions, compared with an international average of 27 per cent.

The report’s author, Louise North, said her findings might go some way to explaining why much of Australia’s mainstream media concluded that Gillard’s speech was a political disaster. “PM will rue yet another bad call,” said one comment piece.

“Gillard’s judgment was flawed. All she achieved was a serious loss of credibility,” said another.

That response was in stark contrast to much of the commentary in social media and conversations between women around the country, which were alive with praise for the prime minister’s stance.

“Leader writers are generally white, middle-aged men and they have no perception of gender bias,” North said. “They don’t want to acknowledge that it happens within their newsrooms and they certainly wouldn’t be open to challenging some of those positions and changing the public discourse either.

Tim Dunlop, in his fabulous article on The Drum, The gatekeepers of news have lost their keys takes up the fight against the Australian media – one of the few in the media to do so – as he tackles the local bias:

The authority of the media – it’s ability to shape and frame events and then present them to us as “the” news – was built upon its privileged access to information and the ability to control distribution.

Collecting, collating, packaging and transmitting information – “news” – was expensive and thus the preserve of a small number of big companies, and we were pretty much bound by the choices they made.

But those days are gone. That model is a relic, though it still dominates the way the mainstream media goes about its business, and provides the template for how journalists think about their role as reporters.

When you have the likes of Michelle Grattan, Peter Hartcher, Peter van Onselen (paywalled), Jennifer Hewett (paywalled), Geoff Kitney, Phillip Coorey, and Dennis Shanahan (paywalled) all spouting essentially the same line in attacking the Prime Minister – a line at odds with the many people’s own interpretation of events – people wonder what the point of such journalism is.

It bewilders me that our mainstream media is taking such a vociferous and concerted stand against public and international opinion. The impact of the speech is lost on them. One could be forgiven for thinking they have an agenda. Regardless of how much they condemn the Prime Minister, the world isn’t listening. 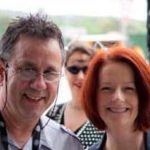 It must have been a Friday as I was dressed casually, as Canberra public servants tended to do on that glorious last day of the week. Adding to the embarrassment I forget to take my reading glasses off! Maybe, just maybe … I was a tad excited.

Before becoming PM Ms Gillard was my Minister in the Rudd Government, a position she took over after Labor’s 2007 election victory. Prior to that, my Minister was Joe Hockey. What a breath of fresh air she was after Joe Hockey!