Following on from Treasurer Scott Morrison’s underwhelming address to the National Press Club on Wednesday, the latest unemployment and underemployment figures for January bury his plans for any sweeteners he might wish to include in the upcoming May budget.

While October and November labour force data suggested things were looking up, December and January would seem to have at least partially corrected some highly contentious numbers.

300,000 new jobs have been created since 2013 yet more people are unemployed now than there were in 2013. That means jobs have failed to keep up with growth, as small as that has been.

We now have 761,400 unemployed and a further 1,051,200 underemployed giving us an under-utilised labour rate of 14.3%. That is the spare capacity within our economy that if fully employed, would see us in very healthy territory regardless of what might be happening offshore.

If it were serious about jobs and growth, the government, as the currency issuer, has it within its capacity to employ our under-utilised workforce in a broad range of activities both in the public and private sector, paying a liveable wage, creating demand and gaining tax revenue, without any need to borrow.

As a sovereign currency issuer, it can do that. But it won’t. The economic activity that would follow if a further 1,839,300 people were employed and spending would transform our economy from its present flat, marking-time position to one of stunning vitality and innovation, a country on the move.

But that’s not going to happen. The flow-on benefits that would follow increased productivity, would include better health outcomes, less crime, less drug trafficking and more socially inclusive communities.

What responsible, caring government would not want that to happen?

The government must have a reason for continuing to tolerate such levels of unused resources. The most obvious reason is that they don’t want to spend beyond the level of taxation revenue, because of a false perception that deficit spending is bad. Such a view is counter-productive to the best interests of the population, because it fails to recognise the causes of unemployment, which is the lack of available jobs.

If the private sector can’t provide the jobs then the government is the only alternative. It’s not rocket science. We need to recognise where we want to go and what we need to do to get there, not be hindered by some archaic neo liberal belief that restricts us attaining our goals.

We need to stop thinking of government spending as wasteful when, in fact, it enhances our well-being. It helps us to become wealthy. Rather than use the word ‘spending’ we should be saying, ‘investing’. Try it. Spending equals exhaustion (spent). Investing equals opportunity for improvement. 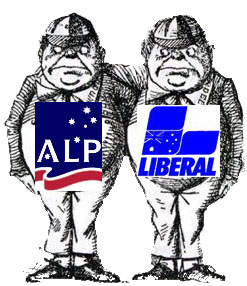 Neither major party understands this. So the government concocts this half-hearted effort to give the impression that they are about jobs and growth when, in reality, they are not. They believe a pool of unemployed is necessary to keep a lid on wage claims and other perks that management take for granted.

Labor could adopt MMT (Modern Monetary Theory) principles, go to the people and say we have a better plan, explain how a fiat currency works and bring the people into their confidence, but they won’t.

And so we have this absurd situation where the media call the tune by forcing politicians into “gotcha” moments on how they will pay for their policies, a tactic that makes good television, but which causes great harm to economic management and our ability to have full employment.

And who benefits from this? The 1% obscenely rich who would still remain wealthy, but not to the same extent they enjoy today. We are governed by fools and for as long as the neo liberal view holds sway, the inequality gap will continue to widen.