Ideas are a bit like being caught it in a river; it’s easy to be swept along without stopping to actually think about whether or not you should swim to the side and have a think about where you’re being taken.

So yesterday, I found the commentary on NAPLAN rather strange, and I was concerned about where the current seemed to be heading.

To summarise, we’ve had NAPLAN for seven years now and (amazingly!) we haven’t seen significant improvement in the test scores.

There was also a story on the radio about a place where they’d trialled putting domestic violence offenders in remand when they breached an intervention order. This was showing some signs of being effective the spokesman said.

In other words, when you actually do something, it sometimes works.

Which sort of made me think of NAPLAN.

If NAPLAN had been combined with some teaching initiative, or at the end of the Gonski reforms then there might be something to question, if scores “hadn’t significantly improved”.

Of course, for some people, the expectation was that NAPLAN would mean that teachers tried harder. It’ll be interesting to see if this data is interpreted by politicians to mean that maybe teachers are trying as hard as they can, or whether we’ll have someone like Christopher Pyne* telling us that this simply means that there’s no need for extra funding because we now spend more on education than we did when Australia was first colonised and that literacy levels were better back then and that the only answer is to privatise it because the private sector does everything better.

Well, I should be careful what I say here because there’s been allegations of a criminal nature about Australia Post sub-contractors and everyone should have the presumption of innocence. However, it’s more the light it’s shining on the wonderful shifting of much of the TAFE sector into private hands that interests me.

Apparently, unlike the public sector, the private sector exists to make a profit, and, as a result, some people put making money before giving students a quality education. Or, in some cases, any education.

Certainly not the Liberals who seem to think that their mates in the private sector can run anything more efficiently than they can. So let’s sell off everything and then we’ll let people self-regulate, because – as Bronwyn Bishop shows – self-regulation takes away a lot of that needless red-tape that just adds to the cost. In the case, of the TAFE sector, the lack of efficient regulation means that private prividers can eliminate costly things like teachers and course delivery, making them infinitely more efficient than the those old, innefficient monolithic government organisations who were slowed done by the requirements that they actually try to teach people some skills.

And speaking of more efficient, I notice that WA politician, Peter Abetz (Eric’s brother) was quoted as saying that Great Uncle Otto, the Nazi, wasn’t all bad. Given the views of the Nazis on homosexuality and Eric’s recent pronouncements on same sex marriage, I was a little concerned as to what he considered were some of Otto’s accomplishments. But I was pleasantly surprised to find that all Peter mentioned was how his relative had ignored Hitler’s orders about razing Paris as the Germans were retreating and prefering to negotiate with the incoming Allied Forces for a civilised withdrawl. (Shame that doesn’t run in the family!)

What a man! Ignoring orders from your superiors as it becomes clear that they’re losing the war. Sort of reminds me of the Liberal backbench standing up to Tony over Bronwyn Bishop. That sort of thing shows great courage.

Medals all round, I say.

Nah, make it knighthoods. Not for Otto though. “I must not give foreigners knighthoods” was one of the conditions of him staying on as leader after his near death experience earlier this year.

* For those of you who watched “Mad Men”, does anyone else find that Peter Campbell reminds them of Christopher Pyne, or is it just me? 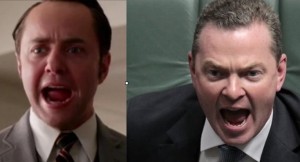