I seldom make New Year resolutions, but this year cries out for an exception.

That is a big ask for an individual, but I know I am not alone.

My head is currently in a total jumble because of anger and frustration at the lies, ignorance and hypocrisy of the current collection of f-wits who claim to be governing us – but whose inability to see that expansion of population is exceeding growth in available jobs, that working for money for one hour a week is not being in employment, that living in poverty hampers the ability to find work and that we need to find solutions to a global crisis – so I hope you can eventually distil a coherent message out of the incoherent ramblings which follow.

I have tertiary and post graduate qualifications in mathematics, education and law, but make no claims to being a great scholar. However, thanks to a very catholic (in a non-religious sense) education, I have a broad understanding of the importance of emotional intelligence – which appears to be totally lacking in our current politicians.

We hear constantly of the importance of the economy – but it is seldom expressed in any way that accepts that it is important because it is intended to benefit us. Economic growth is very obviously only benefiting a select portion of our population, as well as a great many international corporations and political parties!

Just this morning I was hearing the results of an investigation of the current job providers network – which was positively chilling in its revelations of private providers profiting from offering a third world service to desperate job seekers.

Sadly, not a surprise, given the revelations about Robo-Debt, which the government has been forced to put on hold.

‘Brave New World”, ‘1984’ are ominous portents, and, together with our rapid progress towards a police state, are clear evidence that those in charge do not see their job as making life better for us, but using us as pawns in some monstrous bid for overall power.

The man whom the Coalition have chosen to lead them has a very unsavoury history, gained as a marketer and salesman (you can readily find reliable sources to substantiate this claim) – which gives him no relevant qualifications to formulate policy for a country in a period when we are facing an existential threat.

He is a religious nutter of particularly stubborn nature, who refuses to seek, let alone accept, advice from experts on issues on which he lacks both knowledge and understanding.

A major thread of Coalition policy is privatisation. At a minimum, a privatised service will necessarily be more expensive for those receiving the service, because their fees not only have to cover the cost of the service, but also provide a healthy income to shareholders. And the latter do not care how poor the service provided is, as long as a profit is being made.

It must be nice to be able to sit back and let your money, invested in shares, earn money for you! That helps to support a case for paying part of the wages for workers in a publicly-owned company by way of shares in the company. It would be a very incentivising strategy, don’t you think? After all, they do it for directors, so it must be good.

That aside – the current, ever-increasing gap between the truly wealthy and the poor is becoming ever more massive, and government policies are accelerating the rate at which it is increasing.

I still have not even provided any detail about the elephant in the room.

We are at war with a friend turned foe, which has much more powerful forces at its disposal than we could ever muster.

Greed, addiction to convenience and refusal to recognise facts have led us down a cul de sac, and the road is narrowing behind us, threatening to block off retreat.

The warnings have been there for over a century. Vested interests have worked assiduously to extend the period during which massive profits can be made.

It says something about the sheer stupidity which accompanies greed, that those raking in the profits have not lined up a Planet B, so the fate which now threatens the world – catastrophic weather events like floods, inundations, storms, fires and droughts – accompanied by failure of crops and severe fresh water shortages – will challenge even the most forward thinking to maintain a viable lifestyle.

If – and it is a very BIG IF – we clear the Parliamentary benches of the current riff-raff and install an emergency government, comprising knowledgeable experts and competent business managers – we might be able to bring to the fore the solutions which are currently being ignored.

This IS a global crisis.

We need to work with every other government which accepts the need to put aside insularity and private gain and concentrate on solutions for mutual benefit.

And we need to try to persuade the other governments to join us.

Look round the world and you will see that the most peaceful countries are the ones where the least able are helped and protected and the wealthy give a greater share of their wealth to assist others.

Was not that what Christ taught? 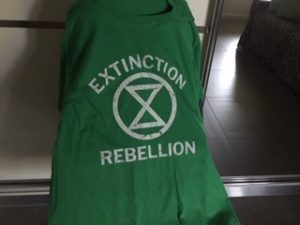 In desperation, I have bought my Extinction Rebellion t-shirt because desperate problems require desperate solutions and since reason is failing, civil disobedience is the last resort.

Once more – this is my Resolution:

Will you join me and get out on the streets – maybe Australia Day would be appropriate? – and tell those whom we rashly elected that they need to go because they are not governing for us!

The clock is ticking.