There was an article in The Sydney Morning Herald and The Age today with the heading, “Govt to tackle head on claims it is unfair and say borrowing against our kids is the most unfair act of all”, by Latika Bourke.

Whoever came up with that headline needs fatigue counselling, but putting that to one side, it is the content that, if accurate, displays an incompetence within the ranks of government thinking, which is simply mind-boggling.

For a start, “borrowing” against our kids is what successive Australian governments have been doing for 100 years. It has made us what we are today. How is that unfair? We allow them to attend the schools and universities that were built. We allow them to use our hospitals. We let them travel on our trains, buses and trams, all of which were built for us as well as provide a future that would prepare them to become productive members of society. How is that unfair? 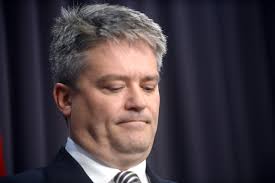 Does Mathias Cormann think that his generation paid for all of today’s infrastructure? When he says, “No parent would keep putting a chunk of their grocery bill on to their credit card every week through their whole life and ask their kids to pay it off after they go,” what does he think he has been doing most of his adult life?

Of course we ask our kids to pay some of it off, but not until the little Focker’s have left home, got an education and a job and taken over from us as we start to retire. What sort of fantasy land does our finance minister live in?

Does he not realise that he is paying now for things his parents helped provide for him? Does he think it all came off their credit card? That is how government works. We build stuff, we create stuff that we expect will last a couple of generations before it needs to be updated or replaced. When it does, that generation replaces it and successive generations thereafter help pay it off.

A handful of examples spring to mind: the Snowy Mountains Hydroelectric Authority, the Sydney Harbour Bridge, the Melbourne Underground Rail Loop, the Australian Submarine Corporation, the Commonwealth Bank, the Ord River Project, the Melbourne/Sydney/Brisbane Rail line and so on. Does the minister think these projects were all paid for by the generation who built them? No, minister, You and I are doing that now!

And just to labour the point, his and my little Focker’s will be sharing that load too. Has he forgotten that he was once a little Focker?

There is a name for all of this. It is called deficit spending. Since Federation in 1901, 112 years ago, 82 of those years involved deficit budgets. There have been 18 surplus budgets over that period, 10 of them came during the Howard/Costello years, a period where private sector debt soared to record levels. They were the most unproductive years since federation. There have been just 12 balanced budgets.

If anything demonstrates the failure of sustained budget surpluses, surely that does. Successive generations have always paid off deficit budgets. Budget surpluses make no contribution to major infrastructure projects whatsoever. They do the opposite. They starve the country of money to build infrastructure. Name one major project the Howard government dreamt up and built that we are not paying off today. Did they build anything? In the article, the main thrust seems to be the minister’s concern for rising unemployment; and well it should be. It is his government’s policies that are forcing unemployment up. The article also claims that former Howard government minister, Peter Reith said unfair industrial relations laws were stopping young people from getting jobs and he criticised Prime Minister Tony Abbott for not doing anything to solve the problem.

Far be it for me to criticise anyone who criticises Tony Abbott, but the former minister is quite wrong. It is not our industrial relations laws that are preventing people from getting jobs but a failure of government to provide stimulus spending that would generate demand. Demand is what creates jobs, not laws.

Little wonder a former minister of the Howard government would think that way. He had lots of friends, who today, have no idea of how little they did for the nation.