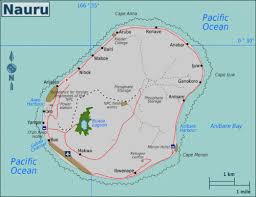 For the amount of money we are spending keeping asylum seekers away we could buy them a country and build luxury resorts for them to live in.

According to the United Nations, in 2012 there were 60 countries in the world whose annual GDP was less than $10 billion. Nauru came 192 out of 193 with a GDP of $121 million. The CIA World Fact Book has them last with “n/a” next to their name. But when we look on a per capita basis, Nauru is rolling in money compared to PNG and our newest potential gaoler, Cambodia.

Per capita GDP in Nauru is $12,022 (though if you added in the people in detention camps that would drop significantly). No wonder they sent the families and unaccompanied minors there.

By comparison, Australia’s GDP is over $1.5 trillion, or about $70,000 per person, but apparently these other countries are better able to handle our refugee problem.

It seems we are searching out the poorest countries in the world and setting our spin doctors onto them to convince them that it will be profitable for them to go into the detention camp business. No doubt we give them some foreign aid, and that is a good thing, but they also have expectations of employment for their own people and a boost to local businesses and the economy.

This leads to problems as we have untrained locals acting as security guards in very tense and difficult situations. We also have very poor local communities seeing asylum seekers housed and fed and given free medical services. Little business goes their way because supplies are flown in so resentment spreads. We have desperate people locked up inside, angry local people outside, and untrained local guards between them. The whole situation is a breeding ground for disaster.

And how much is it costing us to create this purgatory which can only descend into hell?

It’s hard to be accurate about this so let’s look at what we DO know.

The Coalition have budgeted $9.5 billion over the next three to four years for offshore detention camps. This amount is predicated on the assumption that arrivals will fall significantly.

Analysis of budget and immigration data suggests that, if the newly expanded refugee centres in Nauru and Papua New Guinea operate continuously at full capacity, and if the average asylum seeker’s claim is processed in 143 days (a figure cited previously), the cost to Australian taxpayers per detainee will be about $220,000. However, if the current torrent of refugees slows to 5200 arrivals a year, then the average cost per asylum seeker will rise to about $457,000.

The estimates exclude additional expenses of the offshore scheme, such as the costs of customs and naval operations.

The Refugee Council says processing an asylum claim offshore costs about five times what it does in Australia.

On-water operations are not only secret, they are very expensive.

Two frigates ($207,000/day each), seven patrol boats ($40,000/day each) and numerous Customs vessels (unknown cost – let’s say $56,000/day total). That makes $750,000 per day or almost $275 million for the year. I realise they may not all patrol every day but throw in $2 million to refurbish the patrol boats we gifted to Sri Lanka and a few $70,000 life rafts and other such sundries (like poor Angus Campbell’s airfares) and the estimate shows we are talking serious money coming out of our defence budget.

The budget also set aside $1.1 million for the role of Special Envoy over two years. That role was given to Jim Molan who has been notable for his absence since the election. Considering the state of affairs one would have thought our Special Envoy, the architect of the tow-back policy, would have been in there sorting this mess out.

The list of related expenses is endless. Flights backwards and forwards by Bishop, Morrison, Abbott, and their entourages, plus various other politicians visiting detention camps, including Tanya Plibersek and Sarah Hansen-Young, and the exorbitant travelling allowances that accompany overseas travel, would all quickly add up.

Add the cost of the Human Rights Commission inquiry into children in detention, the independent inquiry into the violence on Manus Island, the investigation into possible abuse by naval personnel, reports by Amnesty International and various other groups, and the immigration and coronial inquiries into the deaths of asylum seekers whether in their attempt to get to safety, or by their own hand when all hope was lost, or now by the hand of those paid to protect them.

There has been recent talk of a “wage explosion” which the statistics showed was a load of hogwash. But not so for the military top brass of whom there are many.

In Labor’s last budget, military spending increased across all departments. The largest cost blowouts will occur in wages and salaries and supplier costs.

The joint office of the Chief of Defence, General David Hurley and Defence Secretary Dennis Richardson will receive a $22 million boost to $164 million for next year.

The wages bill for their “small personal offices” and attached agencies tasked to “drive” strategic reforms will rise by $3 million and the supplier bill will balloon by $18.5 million.

The combined military wages bill across the three services will climb by an impressive $274 million. Senior officer (Lieutenant Colonel and above) numbers are set to expand by 59 positions and the number of “star” ranked officers in the Army will grow by two to add to the highest number of generals in the western world.

The total number of star ranked officers in the Australian Defence Force will grow to 190 to manage a force of 58,000 troops or one for every 305 people in uniform.

The ratio of generals to troops is well above countries such as the USA, Britain and Israel and according to one insider is approaching the levels in Thailand, a force that has been ridiculed by Australian officers for being “top heavy”.

The ranks of senior public servants have also expanded dramatically in recent years with several three-star equivalent deputy secretaries doing the job of one just a few years ago.

In 2010, the director of Strategic and Defence Studies at the Australian National University and former senior defence official, Hugh White, said the expansion of the general’s club reflected an institutional weakness within defence.

“There is no policy or objective reason for the rank structure,” Professor White said.

Strategic analyst and defence budget expert with the Australian Strategic Policy Institute, Mark Thompson, said there were two explanations for the blow-out in senior ranks: The high operational tempo of the force and the fact that Defence had been swimming in money for years.

“That makes it easy for them to promote someone,” Mr Thompson said.

People are rightly concerned about the cost to the nation of our approach to the asylum seeker problem but what they must realise is it’s keeping them out that is costing us a fortune.

We have an immigration target of about 200,000. If we made 50,000 of those positions for refugees and, after health and identity checks were carried out, gave them visas that allow them to live and work in the community whilst their claim is processed, we would save ourselves a fortune. Those who found jobs would be paying taxes. Those on welfare would be spending the dollars in the community. Their children could be attending schools and we could provide adult education making jobs for our teachers, social workers and support groups, and training a new workforce.

With that sort of money we could buy a country and build resorts to live in.

Update: “The Abbott government has spent $2.5 million on lifeboats to send asylum seekers intercepted at sea back to Indonesia.
The figure, revealed in letters tabled in the Senate by Assistant Immigration Minister Michaelia Cash, indicates the gov…ernment is paying more than $200,000 per lifeboat, each of which is understood to be used only once.”