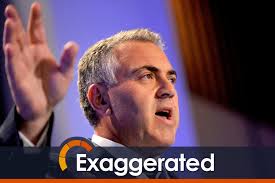 Lest we forget in the debate in June 2012 we read:

An emotional Joe Hockey told Parliament of his father’s journey to Australia as a refugee in 1948.

The shadow treasurer said he could not accept the Government’s plan to send asylum seekers to Malaysia without proper human rights protections.

“I will never ever support a people swap where you can send a 13-year-old child unaccompanied to a country without supervision,” he said.

Should we have spent the last few months looking for Joe’s body? Or was it just the TRADE aspect that he objected to? After all, that’s the sort of weasel words we’ve come to expect from politicians. Something like, I never said that I wouldn’t accept unaccompanied minors to another country, I said I wouldn’t accept a people swap where that happened.

But Joe isn’t running Immigration. Or “border protection” as we now refer to it. Perhaps, he isn’t tough enough, because according to Mr Abbott you don’t want a wimp running their protection racket. (What departments do we want run by “wimps”, Mr Abbott?)

Some unkind people may wonder though, about Mr Abbott’s definition of “wimp”. It usually means “cowardly or unadventurous”, and Scott Morrison isn’t even brave enough to hold his promised press conferences most weeks. Still he has fronted the media – a few days late – to explain that he was wrong – completely wrong – on where Reza Barati was slaughtered. Indeed, Mr Morrison was wrong on many details, but as Peter Reith said in his column a couple of weeks ago, “Hey, that’s ok, I was misinformed and when I pass on misinformation, it’s nothing to do with me if it’s wrong.” (And I can find many, many teenagers who use just that defence when they find that the spreading gossip that some rather pedantic people refer to as a “lie”.)

And anyway, these people throw their children in the water and break Australian law. And riot. We know, because we’re told. As Tony Abbott told us:

“It was a very, very serious riot.

“There was very little damage and by the next morning the centre was operating, people were being fed, housed and clothed.

“Now, obviously you would rather not have riots, but if there are riots they have to be dealt with and this one was dealt with.”

One man dead, dozens injured, but no real damage done. Because it was dealt with. One wonders how Mr Abbott will “deal with” March in March. No REAL damage done. Not to things that matter anyway.

When John Donne wrote “No Man Is An Island” a few hundred years ago, he seemed to think that people mattered. Perhaps these days, he could retitle it “No Manus Island”.

No man is an island,
Entire of itself,
Every man is a piece of the continent,
A part of the main.
If a clod be washed away by the sea,
Europe is the less.
As well as if a promontory were.
As well as if a manor of thy friend’s
Or of thine own were:
Any man’s death diminishes me,
Because I am involved in mankind,
And therefore never send to know for whom the bell tolls;
It tolls for thee.

“Any man’s death diminishes me, Because I am involved in mankind.”

What a relief. Now how to fix that Budget with the same lack of damage…