On the eve of another round of political destabilisation, Di Natale had an opportunity to make a case for Greens’ values. Instead the interview ended with the leader defending an increasingly irrelevant so-called leftist party.

Di Natale and thousands of Greens supporters refer to mainstream political groupings as ‘the old parties’. This despite the fact a majority of the Greens faithful — at least in the electorate where I live — are white-haired baby boomers or greying Gen Xers. These well-educated trend makers have gentrified popular inner-city electorates to such an extent they are now no-go zones for up and coming millennials. The 20 somethings, who prowl the charming inner-city streets, cannot and will not own local real estate, yet Di Natale’s rank and file don’t see the inherent contradiction with this new-fangled colonisation.

Parsing Di Natale’s political rhetoric exposed the hypocrisy of the Greens under his leadership. Instead of calculating his responses he made his political tactics crystal clear to an incoming Labor Government should the electorate choose to kick Turnbull out at the next election.

But apart from trotting out the usual tropes of more renewables and attacking Labor’s base in coal mining electorates, such as the Hunter region, Di Natale failed to articulate his own party’s energy policy. Cassidy gave him the opportunity, and Di Natale fluffed it, choosing instead to speak to his uncritical supporters. Rather than answer the obvious follow-up question Di Natale avoided his party’s greatest environmental failure.

Cassidy recalled August 2009 when Greens elder statesperson Bob Brown voted down Kevin Rudd’s carbon pollution reduction scheme. During this ignoble Greens train-crash, Brown rationalised the target of five per cent reduction, too small. In a subsequent interview with the Sydney Morning Herald, Brown said the Greens target of 25 to 40 per cent reduction meant “the foundation is there to get it right”.

In fact, had the Greens supported the legislation, the energy debacle which continues to roil Australian politics, would likely have disappeared.

Brown’s catastrophic political misjudgement is now Di Natale’s legacy, and his utterances on Insiders make it almost impossible to imagine a well-disciplined incoming Labor Cabinet countenancing any deal with the Greens over energy.

The Australian electorate want the energy wars to end and Labor is aware of this self-evident truth.

As the producer gave the wind-up, Cassidy asked Di Natale about allegations of sexual abuse in the Greens Party, aired on a recent edition of the ABC’s 7.30 Report. 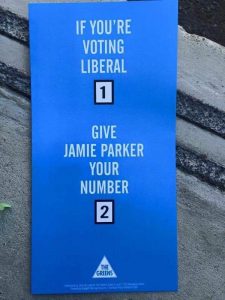 At least three young Greens women stared down the camera and recounted their graphic and grievous experiences. The women are part of an inner-city cohort which sit on milk crate stools, sip coffee and dream about a world without coal mines. Perfect cannon fodder for the Greens who are expert at exploiting idealism. But their day-to-day reality is badly paid work in the gig-economy as baristas or waiters, and being groped by political hipster yobs. Unfortunately, this behaviour is not confined to the Greens Party, but on Insiders Di Natale squibbed the matter by saying he could not comment because of an on-going investigation.

Ask one of these women, or their millennial friends, to list the number of inner city music venues closed down by Greens ‘community action,’ because the noise of people enjoying themselves distract Dakota and Jemima from their Pilates exercises. Or speak to one of my neighbours who still shudder when recalling a Greens pincer hijack of a Westconnex meeting at the nearby Jimmy Little Centre.

A quick trawl of social media reveals a party waging an internal stoush every bit as fierce as the Second Battle of Kharkov. Stalinists take note. But Richard Di Natale is no Nikita Khrushchev. He is a well-heeled Melbournian Senator representing a constituency identical to my local NSW State seat of Balmain

Before his election four years ago, the successful Greens aspirant for Balmain Jamie Parker, letter boxed the electorate with a stark, blue flier. On it were printed these words: “If you’re voting Liberal 1, give Jamie Parker your number 2. The Greens.

Henry Johnston is a Sydney based author. His book, Best and Fairest is available at Valentine Press.