In case you haven’t noticed, the US is about to start another war. Remember George W. Bush and the lead up to the US invasion of Iraq in 2003?

On that occasion it was a carefully calculated move, complete with lies about Saddam Hussein’s arsenal, fabricated intelligence delivered to the United Nations by then Secretary of State, Colin Powell, more lies from Dick Cheney and a compliant Murdoch led media playing along.

The trigger was Iraq’s failure to take a “final opportunity” to disarm itself of alleged nuclear, chemical, and biological weapons that U.S. and British officials called an immediate and intolerable threat to world peace.

There was also the visit to the UN by President Bush warning of the axis of evil, namely, Iraq, Syria and North Korea. This week, another US President, Donald Trump has had his say at the UN, this time not bothering with the scripted diplomatic language of Bush.

Trump uses fighting words. There is no mistaking his intentions. He is preparing to destroy North Korea. His, is a different approach from Bush, who first sort UN approval to invade Iraq. We all saw how well that worked.

It is likely Trump won’t bother with the UN. He has little respect for it and his lack of diplomatic skills or interest in what is politically correct, leaves him open to say it and do it, anyway he sees fit.

The bad boy this time is Kim Jong Un of North Korea, who is demonstrating that he can rile the US’s feathers far more than Saddam Hussein could. With Saddam, it was weapons of mass destruction, which turned out to be bad intelligence. Saddam, never had any.

With Kim, it’s a little different. We know he has nukes. Whether he has the capacity to use them offensively is not clear. But it is likely Trump won’t bother to find out. He’s gearing up for a showdown. His language says it all.

And that now brings us to a point where, with two madmen facing off from either side of the Pacific, the world will soon be holding its collective breath. This time, however, the stakes are much higher.

It’s not the threat that Kim might nuke Japan, South Korea or Guam, because he won’t. We could ignore his continuous, reckless provocation because he knows he can’t win, and truth be told, he’s just blowing off. Just like Saddam.

But he knows that what he is doing aggravates the US. He saw how easily Saddam got under Bush’s skin. President Obama had his measure. He just played along with Kim’s tantrums and dismissed him as a pretentious young upstart, giving him the occasional verbal dressing down.

Sadly, Trump is no Obama. He has no diplomatic skills and also displays less patience. That means his generals are already planning an assault. How and when, is what will occupy most people’s minds. But that’s child’s play compared to the bigger question: How will China and Russia react? 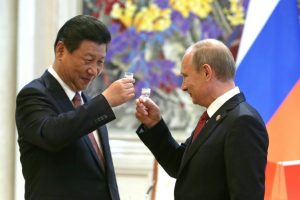 The best guess is: not well. But by how much not well? Both Putin and Xi Jinping are rational, calculating leaders. They are also aware of the unpredictable, irrational and reckless way Trump reacts. If they move to support North Korea, Trump will likely go further and the unknown outcomes could result in Armageddon.

As much as they would protest and threaten Armageddon, one suspects they are unlikely to help North Korea beyond some defensive support. A full scale deployment against the US is unlikely. They may even calculate that a regime change in North Korea could work in their interests.

In the coming months, we can expect a great deal of speculation from world media interests, condemnations from some national leaders and praise from others, as Trump’s spin doctors start the PR campaign. There will also be protests, street marches and fierce debates that make it a left versus right issue. But we in Australia, should think seriously about where we stand.

We should think twice about our position. The ANZUS pact does not require us to automatically join the US in whatever they are planning. Nor should we. This will be a unilateral action by the US because Kim Jong Un has made it personal.

This issue could be resolved diplomatically with the right people in charge, but it probably won’t be. Just as with the 2003 invasion of Iraq, the unknown unknowns are the ones we should be worried about.

Watch as the rhetoric gets stronger and more urgent and see if it’s not all happening again.