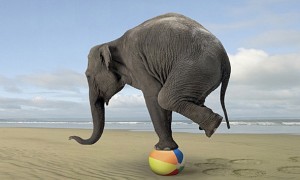 Ok, shut up and listen! We’re restoring free speech in this country whether you lefties like it or not!

Tim Wilson’s appointment to the Human Rights Commission was done in the interest of balance! It’s full of people who believe in human rights, so it’s only fair to appoint someone who doesn’t!

As for the ABC, we’ve had complaints that the Nazi party is frequently presented in a negative light, and none of them have ever been given the right of reply. After all, World War 2 was a long time ago and they all believed that they were doing the right thing. But, just like they did with the “stolen generation”, the ABC doesn’t give any time to these arguments. Anyway, the consequences have been greatly exaggerated.

And we have the line that climate change will wreck the planet over and over again. We’re legislating to ensure that the ABC interviews people who are in favour of wrecking the planet. It’s the only fair thing to do.

Also, there’s been a lot of negative stuff about the Royal Commission into child sex abuse, so we’re demanding that they hear from people who are in favour of sexual abuse.

So that’s the ABC taken care of. We warned them if they weren’t balanced, we’d step in, purge all those left wingers and take control in the interests of free speech and everyone being heard.

As for critics of the Government, well don’t they know that we have a mandate, so they should shut up. We’re allowed to appoint who we like, so Sophie Mirabella is the best person for that job and even if she isn’t, as the new Human Rights Comissioner said: “You have a human right of freedom of association, you have a right of speech; I am not sure I am convinced there is a human right against discrimination, as abhorrent as it is.”

And we’re allowed cut all that funding to legal aid, any body that defends the environment and get rid of the refuges for Aboriginal women in remote areas.

We have a mandate. So shut up and do the poll below!