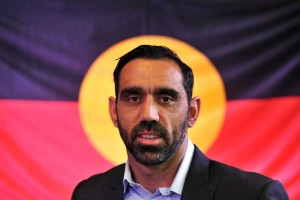 Adam Goodes was the victim of racist taunts (image from abc.net.au)

Andrew Bolt: “Collingwood was being thrashed and when the bearded Goodes took another possession in front of her, she shouted “ape”.

This is very rude. I wonder at her parents. It’s also possibly racist, though she insisted she didn’t mean it that way. Whatever, she needed a talking-to.

Goodes heard the abuse, and pointed her out to security. A bit over the top, since she’s so young, but Goodes has Aboriginal ancestry and no doubt understandably feels such insults more keenly than I think reasonable.”

Ok, if you’ve read the article in question, you may be angry. You may have been convinced that Andrew eloquently argues that the poor thirteen year old has been given some pretty shabby treatment.

Whatever! (Or, in case there are 13yo’s reading this: woteva!)

But I felt I couldn’t let this comment slip past without me going against my basic belief that talking about Bolt only gives him oxygen.

” …but Goodes has Aboriginal ancestry and no doubt understandably feels such insults more keenly than I think reasonable.”

Now, of course, Bolt claims to have Dutch ancestry, so this may explain his stupidity, and being Dutch, he may feel that my insulting of the Dutch more keenly than I think reasonable. Because, after all, those people can be a little sensitive when it comes to generalisations like suggesting that it was the Dutch that were responsible for Apartheid. Of course, Andrew may be a little sensitive when I point out that I have no reason to believe that his father wasn’t a strong supporter of Hitler. And surely, it’s what I think that counts, isn’t it?

Just as the girl was using the word “ape” – if that indeed is all that she said – in a non-racist way, I, too, am suggesting that the Dutch have a history of stupidity and arrogance in a totally non-racist way. I don’t mean all Dutch, of course, just most of them.

Yes, you’re right I’m being offensive. But it’s the Dutch who are feeling the brunt of my insults in a way that I don’t find reasonable.

I guess I’m forced to wonder that if Bolt considers pointing out someone to security was going too far, how would he respond if Goodes had jumped the fence and slapped the girl?

Of course, he began his article with: “I detest racists. But …”