Most Australians want a good quality of life and a good standard of living. To achieve this, the availability of jobs in any region is essential. The Liberal National Coalition Government always, always claim to be the Party to look up to when it comes to jobs and business.

We see the main stream media support this claim with positive spin after positive spin in favour of the LNP or derogatory headlines and stories about Labor. I often wonder if there is a statue of Tony Abbott in the foyer of The Australian or a statue of Campbell Newman and Joh Bjelke-Petersen in the foyer of The Courier Mail; where journalists begin their day by bowing to these statues and vowing to serve them through the course of their duties. Then there are those in the voting public who believe what the Liberal National Coalition say about how they understand business and are great for jobs and repeat it without question.

If you are creating a wealth of jobs, jobseekers must be just lazy…right?

When the LNP believe that they indeed are the best party for jobs and business, it then leads to a false dichotomy that those on unemployment must simply be lazy and that they simply don’t try enough. Obviously the LNP are in charge, so of course there are plenty of jobs to apply for!

Based on this false dichotomy, the LNP’s approach to assisting the unemployed jobs is to starve community programs of funding and punish the hell out of jobseekers by implementing the worst jobseeker support program in Australia’s history “Job Active.” Commentary on social media welfare sites from program participants, suggests that Job Active agencies are more focused on who they can get to pull out weeds for free under Abbott’s work for the dole program, than any real constructive assistance.

Commentary and anecdotes on social media also point to a system where there is no money to assist jobseekers find real work and assistance for study is not supported (unless it is pointless in-house training). With the Newman Government’s changes to vocational education over the last three years coupled with the Abbott Government’s punitive Job Active program, Jobseekers living well below the poverty line must pay out of their own pocket up front costs or pay the course off, as there is no HECS or HELP deferral scheme for many vocational education courses. Those on welfare need to weigh up their options between being able to afford food and housing or an education. As an Australian, I find this absolutely abhorrent and 100% unacceptable and this destroys this our way of life.

The Palaszczuk Labor Government has just delivered their first budget by Treasurer Curtis Pitt and have invested 34 Million to begin the repair of our vocational sector and TAFE, to provide real training options for jobseekers. I hope that this will be extended to ensure affordable access for everyone who has the right to an education, including those on welfare payments.

Sadly, also on social media you read the stories of many jobseekers who are anxious, depressed, frustrated, upset and at times indirectly or directly discussing suicide or ‘not living anymore’ as an option. This is how they are feeling as jobseekers under the Job Active program. Some of the comments I have read and the stories collected by the Australian Unemployment Union are absolutely heartbreaking.

Nothing like a bit of stigma to get those jobseekers moving…

To degrade the unemployed even further, in some towns like mine you are given a Basic’s card. Welfare recipients are given a cashless card and a small amount of cash. This leaves the jobseeker with very little real money to make purchasing decisions with. The Basics Card also seeks to stigmatise the jobseeker by giving them their own identifier which allows every shop assistant and member of the public at the checkout know that they are on welfare.

Couple this with the rhetoric that comes from the agenda of stigmatisation from the Liberal Government such as backbencher Ewen Jones who said: “look there’s your dole, go home, eat Cheezels, get on the Xbox, kiss you goodbye and we will never see you again’?” Add the sensationalisation of welfare recipients on television and so called ‘current affairs shows’; welfare recipients using a basic card, will be seen automatically by some as no good, lazy, bludging welfare thieves. Terminology used by many avid Liberal supporters which places those on welfare in a criminal category. Welfare recipients are not often seen as human beings who desperately want and actively seek work.

There is absolutely no option for those on welfare to blend in or not stand out as a recipient of welfare. This completely undermines the right to dignity and respect without judgement for so many Australians. Under the LNP their reasoning is to shame you into finding a job every time you stand at the checkout. The other misunderstanding about the Basic’s card, is that it is available everywhere. There are only a small number of shops and services which allow purchase with a basics card. This often forces the jobseeker, living below the poverty line, to spend money at more expensive stores. In some towns, they have no options at all. This places pressure on their already meagre budget.

So lets see….who should really be punished. Is it the jobseeker or the Government? I have completed an analysis of job vacancies in my local area of Central Queensland to find out.

Where have all the jobs gone…Long time passing

The availability of jobs is essential to a productive economy and enables the unemployed to actively apply for employment. Plentiful job vacancies also enable career development for the employed looking for jobs to advance their career. This opens up lower level jobs for others to apply for. In many cases, highly skilled workers are stuck at the lower end of their professions and not moving on as there are no jobs available to apply for. This puts a constraint on jobseekers seeking entry level jobs. It also puts a constraint on highly skilled jobseekers who also find themselves in the employment queue and now find themselves pulling weeds under work for the dole.

The graph below is job vacancy data for Central Queensland from March, 2012 to January 2015 of the Newman LNP Government and the new Labor Government from Feb 2015 to May 2015. This is where the data availability ceases. There is no data available after May, 2015, but I will be providing follow ups as it comes to hand. (you can click the photo to enlarge). I have completed an analysis on Central Queensland for two reasons. One is, it is the area I live in and I am very passionate about Central Queensland and the second is to bring some truth to light about how the Newman Govt affected regional areas. Many believe that due to the Public Service cuts and media around protests, it was mainly Brisbane which had felt the impact. This is not so.

Some Interesting Facts that may get the way of a good LNP Yarn.

By comparison, in the first five months of the Palaszczuk Labor Government, Job Vacancies have turned around and job vacancies have increased by 218 jobs for the CQ region in this short time.

The sharpest decline in job vacancies for any month-to-month period was the period of November to December 2012, which saw a 16% decline in one month for Job Vacancies for CQ jobseekers, under the LNP.

In comparison, the Palaszczuk Labor Government has achieved the highest increase of job vacancies for any month-to-month period for the CQ Region, over the last three years. For the period from February to March 2015, Job Vacancies in Central Queensland saw a sharp increase of 16%. This is the highest job vacancy increase for any month-to-month period, since March 2012. In a few short months, the Labor Government has achieved what the Newman Government could not achieve in their entire period in office. That is, “to understand business and create jobs” This is an absolute positive and speaks volumes of the quality of MPs within the Palaszczuk Government. The graph below shows only job classifications with an increase of 20 job vacancies or more. This is not an exhaustive list. 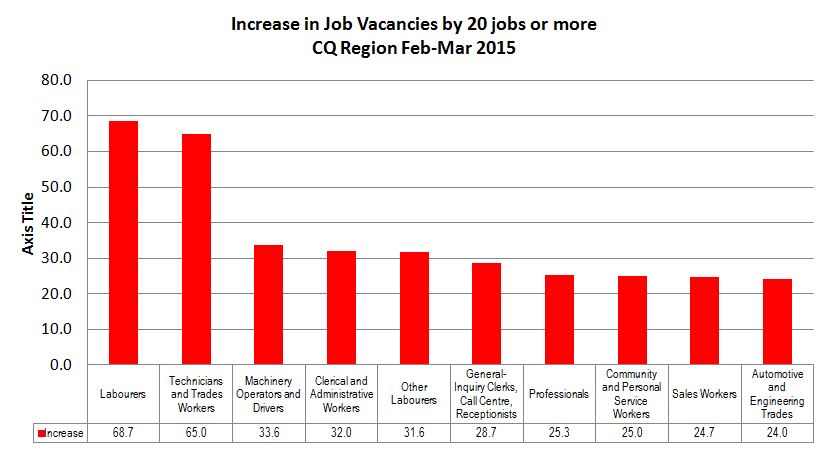 Are Jobseekers as Lazy as the LNP Claim them to be and should they be punished?

The term LNP has been used interchangeably throughout this post, meaning the Liberal National Coalition State and Federal. The LNP use a synthesis of blame and stigma to take the focus off their failings. The LNP repeat the misguided rhetoric that they are ‘good for jobs’ without question and place blame on everyone else, including the unemployed. As the data analysis of Job Vacancies for one area in Queensland show, the Abbott Government’s punitive approach is completely uncalled for. The harsh welfare measures implemented do nothing but feed into the Abbott Government’s agenda of Stigmatisation of those on welfare. Why? Because there are no better votes for the LNP those those created out of hate, disgust and fear.

My Conclusion? If you want to starve a region of jobs. Want to punish the unemployed unnecessarily – Just vote for a Liberal National Government!

Stay tuned for more analysis drilled down on specific classifications and other nerd-filled data excitement!