The inter-generational report released yesterday is no more than a crafted opportunity for those on the conservative side of politics to scaremonger and justify their evil intent. They have tailored a document to suit their own agenda. Just who do these pompous pretenders think they are?

The report itself tells us nothing we didn’t already know, or could not have suspected. It paints a picture very similar to 2010 when I recall the media went into hyper drive over the prospect of a BIG Australia. The fact is a larger world population is inevitable which means our future will be no different from those experienced in most OECD countries.

Each nation faces increased health costs and aged care planning. Everything will increase proportionately including revenues from greater work participation, all of which will be serviced through innovation, creativity, new technologies and so on. So what is all the fuss about?

To suggest that those living in 2055 will somehow have a poorer standard of living than we do today because we didn’t plan properly, is silly. Each generation throughout history has enjoyed a better lifestyle than the one before. Why would the next three generations be any different? Each generation assumes responsibility for its own destiny and acts accordingly.

One of the more interesting claims is that there will be proportionately fewer numbers in the workforce, thus putting pressure on our ability to provide adequate aged care for older Australians. That trend has been occurring for decades and is the product of families having fewer children.

To compensate for that, it would seem logical to increase the immigration intake with the emphasis on young families, effectively slowing down the ratio of those employed to the ageing rate…oops, hang on, that’s what successive governments have been doing, until now. But not this government.

It chooses to continue increasing the numbers of 457 visas for overseas workers, suppressing employment opportunities for those out of work today and literally contradicting itself and acting counter productively to its own findings.

It makes it very hard to take anything they say seriously.

While we clearly need responsible planning to meet the challenges that occur with what are quite natural demographic shifts, i.e. an ageing population, that doesn’t mean we must run budget surpluses to achieve it.

Budget surpluses merely alter the sectoral balances; in this case, money withdrawn by government results in a savings reduction and/or increased debt borne by the private domestic sector.

If governments continue to try to run budget surpluses to keep public debt low, that strategy will ensure further deterioration in household savings until such time as aggregate demand decreases to the point where economic activity slows down, unemployment increases, revenues fall and real living standards decline. 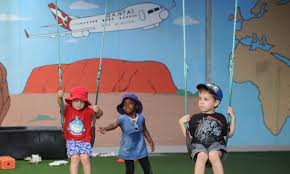 If this inter generational report highlights anything it is that this government has no idea how to address it. Everything the report tells us contradicts what the government is doing. In effect, we are undermining our future prosperity and missing a wonderful opportunity to expand our economy exponentially.

And still, not a word about the impact of climate change. What an incompetent bunch of boofheads.