As much as I struggled to agree with anything John Howard said or did when he was Prime Minister, there is one thing I had to give him credit for and that was his willingness to compromise; not that he did it very often. I don’t see the same attribute in Tony Abbott. He seems too obsessed with achieving a desired outcome and too ideologically driven to admit error.

Not surprisingly, these were classic characteristics of his mentor, Bob Santamaria. To illustrate the point, take his response to the little girl’s question when visiting Seaforth Public School in Sydney last week. The little girl’s question was, “What happens when people don’t agree with your point of view?” Abbott’s answer was so drawn out it became boring, but at no stage did he use the word ‘compromise’. He should have given the class a one word answer, i.e. compromise. He couldn’t do it.

Lenore Taylor reinforced this view when she wrote in The Guardian that he appears unwilling to listen and how this is perceived both in the cabinet and by the rest his parliamentary colleagues.

“In the final sitting weeks of the winter session,” Lenore wrote, “Tony Abbott held an unusual meeting of his full ministry during which he was asked by a junior minister how the government was intending to deal with the widespread view that it had broken election promises. The prime minister’s response was forceful and absolute. The government had not broken a single promise, he insisted. There was nothing to deal with, no case to answer.”

It is this refusal to acknowledge the bleeding obvious that we can identify as the beginning of Abbott’s demise. If he is unwilling to even consider that he has broken election promises, one can only draw the conclusion that he has become the problem. No government party will tolerate that for long. If they can’t get him to change his approach on the issues they know will certainly bring them all down, they will get rid of him. 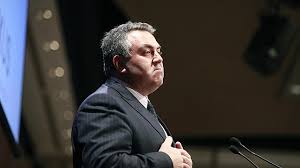 Now, let’s look at Joe Hockey and the state of the May budget. Between Labor, the Greens and the PUP and other independent Senators, the main thrust of what was delivered on budget night looks almost certain to become dead meat, precipitating a rewrite. Even Peter Costello has weighed in with some free advice. A rewrite of the budget would necessarily see an end to the Medicare co-payment proposal, so too Abbott’s Paid Parental Leave Scheme, the deregulation of university fees as well as a revision of the quite brutal attack on the unemployed. When coupled with the abandonment of the proposed changes to Section 18C of the Racial Discrimination Act, this represents collectively, a failure of leadership.

Hockey has rejected Costello’s advice which tells us that he, like Abbott, is not listening either, despite travelling the country trying to convince the cross bench Senators to pass his budget. This is not all that surprising given his public display of defiance but as the pressure builds for a major rewrite, ultimately he will almost certainly be forced into a humiliating back down.

This will not just be seen as a defeat, it will further diminish his leadership aspirations and cause a groundswell of antagonism among different members of the parliamentary party, further dividing the pro-Abbott camp from the Hockey camp. That’s a recipe for self- destruction.

If anyone doubts that, think Rudd/Gillard, Howard/Costello, Hawke/Keating, Fraser/Peacock, Whitlam/Cairns and Gorton/McMahon. Such internal disunity has been the driving factor in the defeat of five of the last six administrations. That this should be occurring to the Abbott government just one year after winning the election must count as a staggering piece of mismanagement on their part and a refusal to learn from history.

More significantly, these self-inflicted wounds place the government in a parlous position. All current polling tells them they will lose the next election and that Tony Abbott is a major reason for their decline. More recently, support for Joe Hockey has also fallen dramatically from an earlier high, precipitated by a budget that has become a millstone around his neck. Jovial, genial Joe now finds himself being portrayed as uncaring, heartless Joe. Hardly the preferred image for a future leader.

So, where to from here? The likelihood is, nowhere, precisely because they are not listening and because their performance thus far, has been a train wreck. It has exposed the inequality evident in their ideology. It has further exposed the absence of an alternative leader. Whoever they chose would prove to be just as divisive as Abbott. The only two that come to mind are Julie Bishop and Malcolm Turnbull. We all know how unpopular Turnbull is within the party and Bishop has convinced many that she has struggled as Foreign Affairs minister and has, at times, appeared out of her depth. Expecting her to present as a viable prime minister is pushing the envelope. Having said that, she is the likely choice. The rank outsider would be Kevin Andrews but it is difficult to see someone further to the right of Tony Abbott ever being elected leader in the foreseeable future.

And therein lies the dilemma for Team Australia. Furthermore, when your most ardent supporter starts to criticise your performance, you know the end is near. The Murdoch camp is already starting to back pedal.