It’s an odd sounding question but not without foundation. Clive Palmer’s bombshell press conference with Al Gore where he announced his party’s voting intentions in the Senate on Wednesday June 25th gave a pretty clear indication that he was calling the shots on the repeal, or otherwise, of the carbon tax. And, one must say that he delivered the news in an almost prime ministerial-like manner.

The announcement, however, had broader ramifications. One gets the feeling that Clive is starting to flex his political muscle. Having such a high profile climate change advocate as Al Gore standing alongside makes for a pretty impressive beginning.

It tells us all that Clive has drawing power. The expectation that something big was about to happen prior to the announcement suggests he also has a good PR team. The media were there in numbers. One might well ask what other plans he has to demonstrate his ability to capture media interest.

The detail of the announcement is also highly significant. It shows that Clive can influence the Abbott government’s climate policy in a way other opposition parties can’t, although he should have known that an emissions trading scheme is already legislated and ready to kick in next year. The question now is: how tough will Clive be and how easily will Abbott roll over.

A better approach for Clive would have been to announce that his support for repealing the carbon tax be conditional on the existing legislation covering the emissions trading scheme being retained. That, I think, is something that might still be negotiable if the Greens are able to have a word in his ear.

But, the broader point has been made. Tony Abbott is the prime minister, but not the primary decision maker. The government are about to learn who has the power. For the three years Julia Gillard was prime minister, Tony Abbott frustrated, intimidated and blocked Labor from implementing much in its agenda. Now, the shoe is on the other foot. Abbott is receiving some of his own medicine and it is anybody’s guess right now just how far that will extend from next week. 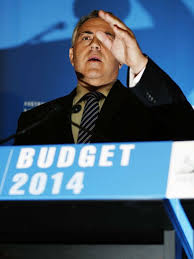 Here’s the rundown on the current situation provided by Penny Wong in an email I received today, as I’m sure did many others:
• Appropriation Bills have passed the Senate. We will never do what the Coalition did in 1975.
• Scrapping the Schoolkids Bonus and the Low Income Superannuation Contribution. The Government sought to scrap Labor’s Schoolkids Bonus and Low Income Superannuation Contribution as part of its bill to repeal the Minerals Resources Rent Tax. Labor voted against this bill in the Senate and it was defeated in March.
• Deficit reduction levy. This increases the top tax rate for people earning more than $180,000 a year. While it represents a broken promise, Labor did not oppose this measure in the Senate because it is targeted at those on very high incomes. The legislation has now passed Parliament.
• GP and Medicines Taxes. Labor will vote against the new taxes of $7 per GP visit and $5 per chemist prescription when legislation comes into the Parliament.
• Increasing university fees and student debt. Labor will vote against these measures.
• Cutting indexation of pensions. We’ll will vote against these cuts when legislation is brought into the Parliament.
• Increasing petrol taxes. Labor will vote against the Government’s plans to increase fuel excises because of the cost of living impact on low and middle income earners.
It is going to be a test of Abbott’s ability to successfully negotiate a variety of deals from now on; something about which he is, thus far, untested. His inability to discern truth from untruth, deception from commitment and his apparent lack of empathy for other people’s pain, will be centre stage. It will expose him to a process he has not previously experienced. How will he respond? One only needs to recall that bizarre moment in 2011 when pressed by Channel 7’s Mark Riley to explain his ‘shit happens’ comment in respect of a deceased Australian soldier. Abbott froze, unable to speak. Mark Riley penetrated a particular area of Abbott’s psyche that failed him. What was going through his mind? If he was unable to negotiate that particular style of questioning what other ‘moments’ await?

When one analyses Palmer’s policies and juxtaposes them with comments he has already made about the budget as well as his attitude to pensioners and families generally, one might be forgiven for thinking he is more socially minded than we first thought; that he might in fact have more in common with Labor than the LNP. Labor’s intention is to work with the Palmer United Party and other cross bench senators to oppose the Budget’s unfair cuts. Tony Abbott is about to realise what it is like to be in government but feel powerless.

As things stand, Clive Palmer is the one with the power.