Ok, as for the promise in the title, I’m saving that till the end. (All right, I know you can scroll down and look, but that’s like going to the end of an Agatha Christie book and pretending you’re smarter than Hercule Poirot – or Miss Marple. Don’t want to appear sexist… No problem with being sexist, just don’t want to “appear sexist” and it’s hard not appear sexist when I write such disparaging things about the Minister for Women who’s clearly doing all he can for the weaker sex.)

However, the subject of this diatribe is to talk to you about some things which I’m sure that many of you have already seen on social media.

First, we have Tony Abbott’s Facebook Page. 390,000 odd likes. (Ok, the odd was just one of those figures of speech that seems more appropriate after I’d written it.) 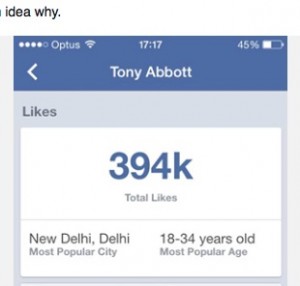 And strangely, he’s most popular in New Delhi.

Of course, I don’t find it strange that he’s most popular with the 18-34 year olds, because, after all he’s such a cool, funky, groovy guy that people of that age all love…

Why am I remembering an article by Paul Sheehan which suggested that the Facebook Page that was anti-Abbott had bought its “likes” because there was no way that it could have jumped to 170,000 so quickly?

Now, I wouldn’t suggest that Abbott would be so… so… Mm, shallow? Pathetic? Can’t think of the right word…

Surely, the Liberals wouldn’t be so needy as to be paying to get people to like the Abbott page? Surely, it just must be that there are more people who like him in New Dehli than at home. (By home, I mean Australia – I’m making no judgement on his marriage which seems to be just fine and surely nobody’s business but their own!)

Anyway, that gives me a nice lead in to my next little media insert. It’s a Tweet and the Twit who posted – (is that the way one refers to people who tweet? “Twitterer” just seemed like too much of a mouthful!) – it was the Eddycation Minnsta, Christopher Pyne.

There’s been a lot of negativity about Mr Pyne on social media over this tweet, but I feel that Christopher – as is usual for someone for whom Coherent is not their first language – has been misunderstood.

Nowhere in the Tweet does it suggest that he thinks that Freya “Australian of The Year Nominee” Newman should have been given a more severe sentence. He simply says that he’s not convinced that the sentence sends a clear message that breaching privacy is wrong. And clearly, clearly, if there’s no clear message it means that – when he or Mal Brough or James Ashby or whoever decided to steal pages from Peter Slipper’s diary and publish those disgusting text messages about things that we don’t want to know about – then he’s not convinced that the Freya Newman verdict sends a clear message to those what done it…

Besides, it wasn’t him and, besides, that was different, that was about almost $1000 worth of taxis and it’s worth spending ten times – or even a thousand times – that to ensure that justice is done. Whereas, Freya Newman exposed a young vulnerable girl who’d received a scholarship completely on her merits from an organisation that benefited from a decision that the girl’s father’s party made completely on its merits.

I think it’s very clear that one was a whistleblower and the other was attempting to use their position in a very political way. (Gee, Freya, I hope you don’t read that and try to sue. I don’t think you’d have much luck unless you could prove that you were the second party in that previous sentence!)

Ok, so just for fun, this Christmas try doing this if you can:

At the Christmas argument with your right wing relatives, instead of being distracted when they bring Gillard, Rudd, Uncle Tom Cobley and friends into it, and trying to explain that the six years of Labor weren’t all bad by using Logic and Reason, accept that the person you are arguing with hasn’t achieved the Age of Reason, simply say: “Yep, I thought so. The only justification for anything that Abbott has done is that he’s the lesser of two evils. Then why don’t you vote for Clive Palmer like I’m going to do… But don’t you think that he’s just a bit of a girlie man in that he never tells us what he’s really thinking? Anyway, I’ve heard that there’s a challenge where you ask one of his supporters to justify his lies without once mentioning the previous government. So far, nobody’s reached the 4 second mark. Care to give it a try?”

Then get out the stop-watch on your phone.

Your next line will probably be: “Oh, 9 seconds! A new record. But only if I don’t count the long pause before you started speaking!”