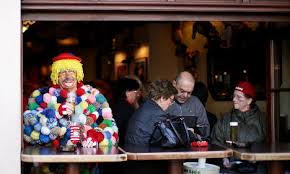 There seemed to be some confusion about Abbott’s promise to spend his first week as PM in an Indigenous community. Some people were arguing that he’d broken an election promise in record time.

“But that’s what he said,” said Dave. “He shouldn’t have said it he couldn’t do it immediately.”

“I don’t really think you can consider these things broken promises,” I argued.

“Well, what about his promise on school funding that every single school would get the same funding,” said Jonno, “they broke that one.”

“No, they’ve said that the total funding will be the same,” I pointed out.

“Yeah, but that’s not every single school.”

“We don’t know that yet,” I insisted.

“Then there’s the money to the childcare workers,” said Dave.

“And Holden,” said someone else.

“Look,” I said, “before the election the Liberals were quite clear that they weren’t going to continue to throw money at the car industry.”

“I heard today that Turnbull’s announced that they’re going back on their NBN commitments,” said Jonno.

“That’s just not true!” I insisted.

Before I had a chance Barry spoke up.

We looked at Barry.

“Before the election, I got talking to the Liberal candidate in my area, and he told me that I shouldn’t believe Labor’s scare campaigns about Workchoices and raising the GST. He told me that if I voted for the Labor Party, I’d get the most incompetent, the most dishonest, the nastiest, stupidest government in the history of Australia.”

He sipped his beer.

“Well, I voted for the Labor Party, and I guess you’d have to say that they kept that promise!”