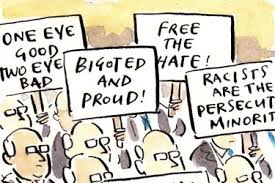 After telling us in the Senate that people have a right to be bigots, in a press conference today Senator Brandis said we must also defend their right to mock and humiliate others as this leads to a robust democracy. To defend this outrageous statement he referred to three examples.

First was the “infamous example of the Bolt case” where Andrew Bolt was found to have contravened section 18C of the Racial Discrimination Act when he published a series of articles suggesting that it was fashionable for “fair-skinned people” of diverse ancestry to choose Aboriginal racial identity for the purposes of political and career clout, implying certain individuals had been given their positions purely because of a distant ancestor rather than earning them on merit.

The applicants sought an apology, legal costs, and a gag on republishing the articles and blogs. They did not seek damages. In other words, had Bolt apologised and agreed not to republish before the matter went to court, there would have been no court case and no cost.

Senator Brandis says it is up to the victim to stand up for themselves. These people tried that – Bolt refused to say sorry and continued publishing related material. He has a large audience in both the print and television media. How were these nine people supposed to “stand up for themselves” without legal recourse?

The next example was even more bizarre. Senator Brandis said it was ok to mock and humiliate because they do it every day in Parliament. People’s feeling may be hurt but hey, shit happens. (The last sentence is me paraphrasing – the one before it sadly isn’t.)

I found this astonishing. He suggests that humiliating people is a crucial part of the robust debate necessary for a strong democracy. What a load of bullshit. That shows how low our Parliament has sunk. We naively think we are electing them to govern – to make decisions based on expert advice for the greater good. They think they are there to win the insult game.

The third example was the media. Brandis said to the assembled journalists “You mock we politicians every day and so you should”. Personally I would prefer if they reported accurately on what you are doing and provided informed comparative analysis.

These examples from Senator Brandis, that government and media like to mock and humiliate people, are why over 100,000 people marched in March. We want better. In fact we demand better.

Every year, people, many of them children, commit suicide because of mockery and humiliation. It is not ok to deliberately try to embarrass people. The damage done can be long term if not irreparable. While considering how you can protect Andrew Bolt from ever having to say sorry, consider this:

Senator Brandis, you have said that victims should stand up for themselves and the community should accept the responsibility for raising standards. That is what we are doing. We find the direction your government is taking offensive. The community requires you to do better. The many signs at the march in March gave you an indication of what we find offensive and the list is growing every day.