So, How Will You Do It Better?

A personal view of a failed democracy

I sometimes wonder if it is in becoming a parent, responsible for…

Jobs plan must be a way forward, says…

This is emphatically not an election campaign about policy.  Labor’s are mostly already in place and the Coalition doesn’t have any “big ticket” policies that aren’t frankly a total joke or are heartily rejected by conservative commentators and party members alike.   Nor is this campaign about political philosophy or ideology.

It is well-nigh impossible to mount a meaningful argument in contemporary Australia regarding the ideological differences between Labor and the Coalition.  The seismic shift to the political right in this country has all but guaranteed its impossibility.  It was once a chasm, but it’s been bridged in what is really a quite remarkable feat of political engineering.

Nor again has this vote soliciting boot-sale been about facts.  Of course, truth and facts are always one of the first casualties in any political election campaign, but this one seems especially unconcerned with them. Indeed facts are an impediment to most political strategies.

One might suggest, however, that the plethora of media “fact checking” mechanisms belies this assertion, but I’m happy to dismiss such things as little more than media stunts.

Perhaps the only persons who are seriously interested in facts are the Labor supporters who’ve been reduced to wretched despair over the almost complete disregard for them.

There may well be some more moderate members and supporters of the Coalition who also bemoan this facet of the campaign and of the unseemly nature of modern Australian political discourse and debate, but if they exist, they’re not saying much.  Or they’re saying it in places I don’t tend to visit.

No, this campaign has been about one thing and one thing only, and thus far it is completely triumphal – the winner is Prejudice.

Mind you, it cheated a little bit and got an early start.  Prejudice was the major cultural force in Australia well before the election was even called.   It had its pre-selection victory in the Seat of Sovereignty when it saw off our first female Prime Minister.  I believe in some places it’s still doing a victory lap.

There was nothing of fact or policy or ideology in any moment of that unwholesome dynamic.  It was all about Prejudice and pettiness of mind.  It was also about fear, which is the primary fuel of Prejudice.  Fear of the new (a woman), the different (an atheist), the unconventional (unwed and childless).  Gillard was all those things, but worse, she also knew how to be successful.  There can be only one form of response to something like that when it’s feared and it isn’t reasoned argument.

By the time the election was called the cultural dry rot had well and truly set in and bits of our Nation’s political, intellectual and moral integrity had already become flaky.   We could not, for example, tell the difference between an actual carbon tax and an industry-based static carbon price, even though they are economically distinct things.  We could barely tell the difference between a $100 leg of lamb and the Loch Ness Monster.  The mantra of Prejudice was well and truly established and just about set in the Public’s DNA:  Labor Brand Tarnished.  Never mind that the slogan doesn’t actually mean anything.  The great thing about slogans is they don’t have to.

So, why has Prejudice become the front-runner for electoral success in this election?  Well, the first thing Prejudice has going for it is that it’s awfully vocal; it tends to shout a lot, though often with the aid of visual and auditory devices. 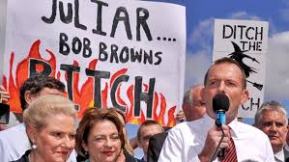 It simply never goes unheard.  Its voice may be annoying but it resonates like the piercing call of a Pallid Cuckoo cutting through a still, dark night.  You just can’t shut it the hell up and no amount of wishing and hoping can make it so.  The second and perhaps most significant trait Prejudice has in its favour is that it’s remarkably contagious.  It’s a sort of lickety-split Leprosy.  You don’t know it’s affecting you till one day your brain falls out.

This election campaign began life with an already deeply afflicted populace.  Its colic was congenital.  But it was to become a near piffle pandemic.  This is what happens when certain members of the public refuse to immunize themselves with facts and information.  They spread their jaundice germs all over the place and infect otherwise innocent bystanders, who subsequently become subject to feverish bouts of irrationality and rancid rodomontade.  If you combine the two main facets of Prejudice in their purist, most virulent form you end up with something like Radio Shock Jock Alan Jones.

Another important reason that Prejudice tends to prevail so effortlessly, is precisely because it is so effortless.  It requires and expresses a minimum of thought whilst at the same time engendering the feeling of absolute genius in the one who evinces it.  It doesn’t require facts, nor consistency, nor logic, nor integrity, decency, humility, reason, literacy, education or a driver’s license or even an 18 plus card.  Hell, Prejudice even has anonymity on its side.  No wonder it’s so damned popular!

I’m not going to indulge in a repetition of the oft’ repeated observations about who and what has spread this insidious disease throughout our neighbourhoods, and we must remember they are our neighbourhoods.  But I will observe that it’s difficult to avoid the flu when significant social forces are happy to cough in your face and feed you a daily dose of bacilli for breakfast.

It’s simply my hope that sometime between now and September 7, even as late as polling day itself, people will wake from the delirium of this distemper and have just enough moments of lucidity to see things for what they are and to consider what they are about to do.  I hope we don’t allow Prejudice to prevail in this election.  The damage it has already done to our social fabric is serious enough, but if Louie makes it to the Lodge and finds there’s no Mortein, he’ll have a field day.

By Ad astra    Do you, like me, bristle as you hear the political class playing the blame game?Seldom have we…

Tony Abbott still makes me feel sick in the pit…