Oh boy, Scott Morrison. If you thought your post MYEFO press conference was convincing, you are in trouble. You sounded like you were reading from a script prepared by a committee.

I didn’t count the number of times you mentioned ‘jobs and growth’ but it was enough to demonstrate you were struggling to assure yourself that what you were saying was convincing.

Scott Morrison’s analogy of a family on their way to their favourite holiday destination was hilarious. “Are we there yet?” How would you know? You have no idea where you are going.

He has announced revenue write-downs of nearly $34 billion dollars on a budget prepared just 6 months ago. That budget was based on utterly unrealistic assumptions which Morrison’s predecessor was told on budget night.

What that suggests is, the May budget was a flimsy construct to produce a pre-determined bottom line that was never attainable.

I doubt we will be hearing any more about Labor’s debt and deficit disaster lest the voters begin comparing it with the one now building under the management of the so-called “adults”.

Funny how what goes around comes around.

Opposition Treasury spokesperson, Chris Bowen has every right to brand Morrison as WTH (Worse than Hockey) and his management, “a great big failure”. The government’s plan for a return to surplus has now been put back another year. Who do they think they are kidding?

Morrison acknowledges the steep fall in revenues as a result of weaker commodity prices and low wage growth. Does he still say we don’t have a revenue problem?

Does he still refuse to look at tax expenditures like superannuation concessions, negative gearing, mining subsidies and the like? That would be a good first step to strengthening our nation’s finances.

But no, they are more focussed on cracking down on welfare fraud to save a few hundred million when they could be saving billions abolishing corporate subsidies.

It is patently clear where their loyalties lie and it is not to the Australian people. It is to their corporate masters who keep them funded. 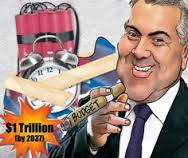 When they came to office in September 2013, Government gross debt was $284 billion. Today it is a shade under $400 billion representing a 70% increase in just two years. What would they have said about that if they were in opposition today?

It now remains for Labor, who have presented a number of their policies to improve the bottom line, mostly by concentrating on tax expenditures, to press home the government’s failure to demonstrate any measure of economic credibility.

With an election due in less than 12 months, the outcome should be decided on who has the most convincing case for economic management, not on personalities.

That is Labor’s challenge.