Is Malcolm Turnbull deliberately waging a subtle campaign to undermine Tony Abbott? If one takes a closer look at some of his recent comments, one might detect just a hint of something along those lines.

While Turnbull continues to support the PM publicly, astute observers might wonder if we are witnessing a covert scheme to undermine Abbott’s authority.

Turnbull’s contradiction of both Abbott and Hockey on the superannuation idea, his open criticism about the budget, his somewhat comedic reference in parliament this week to Abbott’s infamous suppository remark, all have a tinge of ridicule nicely camouflaged.

Contrast those with Abbott’s three comments this week covering the post-tsunami aid given to the Indonesians, the Aboriginal rural ‘lifestyle choices’ and the response to the United Nations asylum seeker claims and we have two diametrically opposed attempts at playing the leader.

One is desperately trying to re-establish his credibility, the other asserting his own. 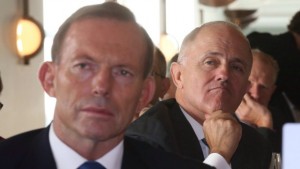 Take a closer look at this picture by Andrew Meares of The Age. One man looks completely relaxed while the other is clearly feeling the strain. It is a telling sign that the pressure to perform is very one-sided.

A few weeks ago, Turnbull gave a presidential-like performance on Q&A. Since then, his higher than normal profile suggests that a concerted campaign to force another spill motion is in play.

Even Turnbull’s defence of Abbott’s ‘lifestyle choices’ comments included what could be interpreted as a put-down. When he said that Abbott’s comments should not be turned into a “let’s-give-Tony-Abbott-a-belting occasion”, was that code for the opposite?

I’m not a politician, but I would have thought if there was a golden rule in this precarious occupation it would be: careful who you pick a fight with and never find yourself fighting on two fronts.

Tony Abbott has been in the game long enough to know this, yet in the space of just a few days he has broken both these rules; indeed he has now picked three fights on three fronts.

Right now, with two young Australians about to be executed in Indonesia and with us taking every diplomatic step we can to help them, picking a fight as he did by reminding their president of our assistance during the 2011 tsunami, was poor form.

If Abbott expected his comment to resonate with Joko Widodo he was right, but for all the wrong reasons. The Indonesian President’s response was entirely predictable and would most certainly have strengthened his resolve to see the executions carried out, if indeed, he needed any.

Perhaps the majority of Australians don’t give a rat’s hiss about Indonesia but international diplomacy demands greater respect than that. Tony Abbott’s insensitivity might have made things worse.

Then came his callous reference to Indigenous Australian’s “lifestyle choice”. For someone who boasts spending a lot of time in rural aboriginal communities, one would have thought he had some understanding of their connection to the land.

His comments on Alan Jones radio program are a testament to his ignorance of their culture, their religious beliefs and their traditions. On both these occasions, Abbott sounded and acted like a 19th century colonial.

The third front Abbott has constructed for himself is his confrontation with the United Nations over our government’s treatment of Asylum seekers.

Saying that Australians are sick of being lectured by the UN is, once again, not the choice of words a national leader should be choosing.

In the meantime, Malcolm Turnbull has taken to the stage and is looking and sounding more prime ministerial than ever. He has chosen when and how to broadcast himself cunningly and he has picked the right issues to do it.

Don’t be surprised if he starts popping up more frequently, in more and more places, espousing his views on issues that go well beyond his communications portfolio.

For me, it’s all too much of a coincidence.