By Karen Stewart Mr Morrison, I was rather shocked by your choice of…

Papers Instead of Human Lives: The Sentencing of…

In May 2019, the US District Court for the Eastern District of…

By Ad astra Asked what he wanted from life, a wise man said: I…

Good morning. We are hearing that people have not been able to leave…

"This Won't Be A Sympathetic Interview, Mr Morrison!"

Sig O'Phant: Good evening, tonight we're bringing you an interview with the…

It is a country other powers simply cannot leave alone. Even after… 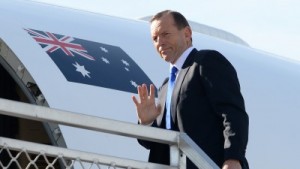 Why is there a sense of foreboding whenever Tony Abbott travels overseas? Probably because one’s immediate reaction is, “Oh God, in what way will he embarrass us this time.” I can’t help thinking that as they watched John Oliver’s parody of Abbott on his weekly satirical, “Last Week Tonight” show, members of the American press were of a similar mind about his planned visit there next week. Tony Abbott’s poor media presence, his stilted speech, his fake laugh are grist for the mill to a press corp. aware of his tendency to say something incredibly stupid. My fervent wish would be that they ignore him and give us all a break from the cringing and squirming we will have to endure as we sit on our sofas, in front of our TV sets and follow his movements across the Northern Hemisphere. The planned meeting with US President Barack Obama will, no doubt, be particularly painful to watch. One can only hope that Obama will take pity and shield him from the US press or at least spring to his aid when Abbott inevitably sticks his foot in his mouth.

In the meantime the Coalition government and particularly the Liberal side of it appear to be imploding. Bolt on Turnbull, Bernadi on Turnbull, all stirred up over a meal Turnbull had with Clive Palmer. And the winner was . . . Clive Palmer. Even West Australian Liberal MP Dennis Jensen, a former research scientist and defence analyst, was moved to criticise the government for cutting funding to the CSIRO? It’s not hard to see that the Liberals are running scared right now. Bad polling numbers, internal criticisms of Hockey’s budget and the press popularity of Clive Palmer who is clearly enjoying the road show and keeping everyone guessing as to what he’ll do next, is taking its toll. Queensland Coalition MP’s in particular are already starting to panic. Palmer’s popularity in Queensland and the rising dissatisfaction with the Newman state government is a genuine concern for them. As most MP’s know only too well, when Queensland voters are upset they can be particularly savage come election time.

One wonders why Andrew Bolt raised the question of Turnbull’s activities on his programme. Was he prompted to do so by the Abbott camp or was he trying to gain some publicity for his show? Does he genuinely fear Turnbull? Has he forgotten the devastating impact leadership speculation had on the previous government? For all the commentary that has appeared on this issue, it was Bolt who started it. He is the one making the case for Turnbull’s so-called disloyalty. Interestingly, several Coalition MP’s came out this week criticising Turnbull and favouring Bolt, when the PM made it clear in parliament that he favoured Turnbull over Bolt. That is hardly what you would call a co-ordinated united front.

In the meantime, Hockey has gone strangely quiet and Scott Morrison is in damage control. Two self immolations and one murder so far on Scott Morrison’s watch. And that’s what we actually know. There are claims of asylum seekers being lost at sea while being forcibly repatriated to remote Indonesian Islands by the Royal Australian Navy. But the Minister is warning his critics against making “assumptions” about what led Sri Lankan man Leorsin Seemanpillai to take his life. Does he not realise by saying that, he is drawing attention to the obvious?

Now, a new problem has surfaced and it has gone viral. John Oliver’s ‘Last Week Tonight’ skit made Abbott look like the village idiot. Anyone familiar with the Comedy Channel who knows the threesome that is Jon Stewart, Steven Colbert and John Oliver, would also know their popularity worldwide via YouTube. And the Liberal party brains trust would have noticed too that Oliver was careful not to alienate his friends in Australia. He emphasised that only 30% supported Abbott. Australian politics is hardly ever presented in satirical form overseas. We are mostly ignored, criticised or praised depending on the circumstances, but rarely satirised. And for an Australian Prime Minister to be the subject of that satire, to be so jeered and made to look so inept and just plain stupid must be a first, particularly on the eve of an official visit. Will we be hearing accusations that this also was planned by Turnbull?

Everything about this farcical situation has been of the conservative’s side of politics own making. It might have been planned but the more likely explanation is that they are all just so rattled and dysfunctional these days, that it all came naturally. Did you see Barnaby Joyce’s sexist gaffe on The Project during the week? On Peta Credlin, he commented, “I’m on good information from her husband that she’s a woman.” He explained the gaffe as a poor attempt at humour. Yes it was, but it also validates the dysfunctional element infecting the government. What a circus!