That I’m using the word “war” in my heading is unfortunate; however, it is what it is. A war started by an egregious international bully, an egotist with a right-to-rule attitude, a plank over his own eyes, and a blurred nostalgia for times long gone.

The political bullies of our world use tactics intended to bully people into ignorance rather than a well-reasoned standpoint. They attack their opponents by bashing their character and painting them as villains and charlatans, whereas they are rational people.

The why of it is beyond me. But then, I have never understood the violence of wars: the lives it takes and the destruction it makes.

As I write, I am at the same time glancing at an article in The Guardian written by Pjotr Saucer and Andrew Roth: Thousands join anti-war protests in Russia after Ukraine invasion. It attempts to express the feelings of those Russians trying to understand why their President had begun a war with Ukraine.

I pause my writing, thinking that the article might be helpful to my own understanding, which of course, is limited – an incomprehensible war to those uninformed in European history.

The writing is dark and sad. It quotes a 30-year-old teacher Nikita Golubev:

“I am embarrassed for my country. To be honest with you, I am speechless. War is always scary. We don’t want this.”

“Why are we doing this?”

It was a view expressed by his fellow citizens, a sentiment of anger and hopelessness that was shared by many commuters

“At the Ukrainian culture centre just down the road, the mood was even grimmer.”

Lines of vehicles snake their way along the main roads. Interestingly the writers say Kyiv is just down the road, and the mood there was even grimmer. So much so that it is about to shut down.

A gigantic distance exists between those dictators who wish for nothing but the self-satisfaction they attain from bullying those less intense than them. The ordinary citizen wants nothing more than an equitable society where those who want to achieve can and be assured that those who cannot will be looked after.

The world’s bullies and the dictators insist that we conform to their thinking which is unnatural in a free democratic society where the contest of ideas is a constant. If they were alive today, all past dictators would attest to this truth.

The administrator of the Ukrainian culture centre says the centre:

“… aims to do nothing more than promote the language, traditions and identity of a country Vladimir Putin has denied legitimacy as a modern state.”

Around 3 million Ukrainian citizens live in Russia and have been told to leave immediately.

What happens in Ukraine matters everywhere.

“Bullying in general means intimidating or overpowering someone weaker,” be it an individual or a country.

Does history identify the world’s bullies? It often depends on your political standpoint or your sense of right or wrong. The US has been accused of being a bully.

Recent history recognises China’s President Xi Jinping as a bully because others won’t confess to his country’s rightful place in the world. Iraq’s Saddam Hussein bullied his people and assassinated those who wouldn’t conform. Russia’s Vladimir Putin is currently forcing Ukraine to recognise his greatness. Former U.S. President Donald Trump’s ego needed to be fed, and he bullied those who didn’t realise it.

Benjamin Netanyahu was a bully of the Palestinian people. Rodrigo Duterte, President of the Philippines, enjoyed shooting his people, and President Marcos, who preceded him, was just as bad. The sadistic Pol Pot practised genocide, and Augusto Pinochet of Chile terminated the lives of those who opposed him.

Recent history is littered with them. I’ve only provided a handful.

Domestically one doesn’t have to think for too long to recall an Australian bully like Tony Abbott, who taunted Australian Prime Minister Julia Gillard as opposition leader. Then you can skip a heartbeat and find the current Prime Minister Scott Morrison, who one can only describe as a bully first class.

Last week, verbal diarrhoea flowed from our Prime Minister’s mouth like a bully in overdrive rightfully dedicated to his task. 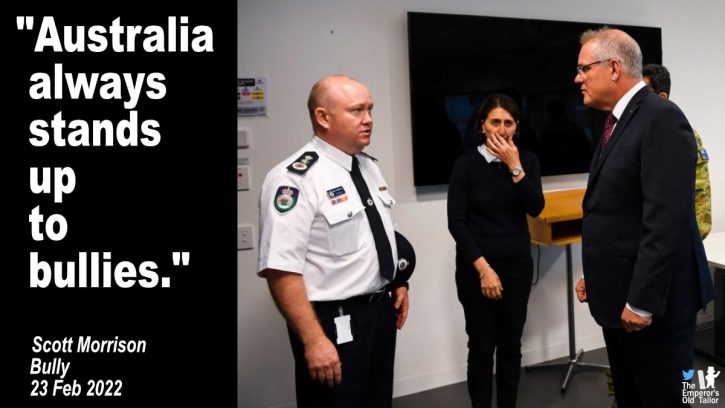 The abuse of something usually causes it. In this case, it was bullying overload. The diagnosis said that Morrison stands up to “thugs and bullies” all too often, but more often, he acts like one himself.

He said about the war between Russia and Ukraine on the Sunrise programme that:

“This is about an autocratic, authoritarian government that is seeking to bully others.”

Then he moved on to the Today Show, saying.

“There are consequences for this threatening and bullying and aggressive behaviour.”

On the ABC’s AM show, he was asked about the Russian embassy’s claim that Australia’s sanctions are xenophobic; he let it go through to the keeper.

“I’m used to bullies saying those sorts of things when people stand up to them.”

In The Monthly, Rachel Withers responded that:

“In a statement posted to Facebook on Wednesday night, the embassy disputed Morrison’s declaration that Australia always stands up to bullies, citing its silence on the discrimination of Russian speakers in Ukraine. While this is quite clearly spin, the embassy is right in one respect: the Australian government does not always stand up to bullying. In fact, the Morrison government is often the one doing it.”

“… The irony of the PM’s pushback against “bullies” has not been missed on Twitter, where a quick search of the word turns up a number of derisive tweets, noting Morrison’s treatment of everyone from Christine Holgate to trans kids to the Biloela family. Picking on women, children and refugees is obviously not the same as invading a foreign country. But is this really the kind of rhetoric that Morrison, with his reputation for bullying tactics, wants to rely upon?”

The theme is the bullying of women, children and refugees. He is not about to invade New Zealand, but bullying is uppermost in his thinking. He needs to keep his bullying reputation intact. A reputation for bullying that he needs? It is supposed to frighten people. He and Dutton are such like-minded souls.

We always stand up to bullies says the government that has detained the Biloela family for 1451 days.

On Wednesday of last week, the queen of savage words journalism Niki Savva served up yet another vicious column that said in effect that:

“Morrison spent much of last week’s meeting of his party’s federal executive – sorting out the NSW preselection drama.”

She said he was “yelling and thumping the table” as he sought to get his way while reminding members that “he was the prime minister.”

“I am the prime minister” or “as Prime Minister” is a phrase that will be familiar to political pundits who follow politics assiduously.”

Morrison saying He always stands up to bullies. https://t.co/n7qNiPFMAe

It is the same one he reportedly used to assert his authority over former Liberal MP Julia Banks after taking the leadership. She recognised it when he condescendingly used it against ABC reporter Anne Connolly in a press conference about the aged-care royal commission.

Back to Rachel Wither’s article in The Monthly, she writes that:

“I previously catalogued much of Morrison’s bullying behaviour towards women after he turned the guns on Tasmanian MP Bridget Archer for having crossed the floor on integrity late last year, so I won’t go through it all again. But it’s safe to say that, in the opening weeks of 2022, little has been done to counter the notion that Morrison is a bully.”

“There are likewise numerous recent examples of bullying and aggressive behaviour from the Coalition as a whole.”

You can read them here.

To say that we are ambivalent about our politicians is an understatement. Now we are ashamed.

To rail against bullying is a strange tactic to use when you are at the top of the list. The lying Prime Minister has shown that he is prepared to play any card in the pack if it enhances his re-election chances. Nothing is beyond him. He is a bully.

Previous diary entry: Who will you vote for and why? Who would you trust to deliver good government?

Power is a malevolent possession Prime Minister when you are prepared to forgo your principles and your country’s wellbeing for the sake of it.

Only the dead see the end of it