Responding to revelations surrounding of an increase of workers killed in workplace-related accidents last year, the Australian Council of Trade Unions (ACTU) has called for a national set of legislation aimed at punishing those who fail to keep their workplaces safe to acceptable standards.

An ACTU delegation of union officials and family members who have lost loved ones at their worksites spoke out in front of the Federal Senate Courtyard in Canberra on Thursday, and highlighted the fact that 183 workers were killed on Australian worksites and places of business in 2019, an increase of 37 deaths viewed as unavoidable by them as well as WorkSafe compared to 2018.

That rise marked the first of its kind in year-to-year statistics since 2007, said the ACTU.

Moreover, the ACTU sought to remind everyone that these aren’t just statistics – these are actual people who lost their lives at work due to accidents, and how their families, friends and loved ones have been impacted by such losses of life.

“Everyone should feel safe at work. No worker is expendable. Everyone has a right to go home to their families at the end of every day,” said Liam O’Brien, the ACTU’s assistant secretary.

Elsewhere, in Victoria alone, the state’s WorkSafe organisation reported on November 20 that with the electrocution death of a 29-year-old country farm hand in Gerang Gerung, located near Dimboola in the state’s central regions between Horsham and Warracknabeal, approximately 340 kilometres northwest of Melbourne, the state’s 2020 workplace-related fatalities toll has risen to 61, a rise of two from 2019 to date.

The state’s increase rate in workplace-related fatalities over the previous 365 days had been as high as five, when in late October, a 71-year-old worker at a northern Geelong folding bed manufacturing factory got his clothes tangled in machinery.

“I can’t begin to imagine the pain felt by the families who have lost a loved one at work. I don’t want any families to suffer that type of trauma,” said Jill Hennessey, the state’s Attorney-General, when Spring Street passed a workplace manslaughter law last year.

“We promised we’d make workplace manslaughter a criminal offence and that’s exactly what we’ve done – because there is nothing more important than every worker coming home safe every day,” added Hennessey, who was the minister for workplace safety for the Andrews Labor government at the time of the law’s passage that she was responsible for. 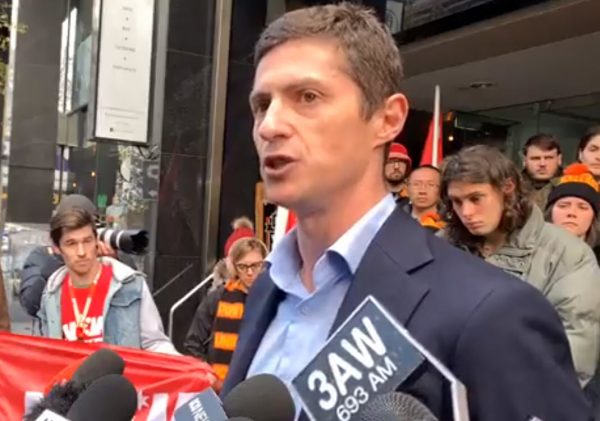 ACTU assistant secretary Liam O’Brien, calling for action from the Morrison government on workplace deaths (Photo from the ACTU)

Under this legislation, in the state of Victoria, workplace manslaughter is deemed a criminal offence, with employers who negligently cause a workplace death are due to face fines of up to $16.5 million and individuals potentially facing up to 20 years in jail.

Similar laws are also being introduced in Queensland, Western Australia and the Northern Territory – and O’Brien and the ACTU have called for the Morrison government to step up and introduce similar legislation nationally.

“We hope that politicians on all sides will understand the importance of committing to tougher workplace health and safety laws – especially when hearing that there has been an increase of fatalities since 2018,” he said.

“The Morrison government must take action to ensure that no matter where a worker is killed their family can expect these deaths to be thoroughly investigated and employers are held to account,” added O’Brien.

Victoria Trades Hall has worked together with WorkSafe Victoria to ensure that if a worksite death does occur, that actions such as the offering of counselling, leave, and bereavement are available to all co-workers, affected family members and friends.

“Dealing with grief takes time. It is a normal response to death, trauma and loss. People need support at different times and in different ways. What happens in a workplace following a death can be a very important part of the process,” Luke Hilakari, VTH secretary, wrote in a guide to enable businesses’ occupational health and safety representatives deal with such incidents in a case-by-case basis.

Currently, the biggest industry increases in workplace fatalities have occurred in the construction industry, followed by public administration and safety, and then agriculture. As of 2018, each of these industries had suffered a rate of fatalities at a higher rate than their respective prior five-year averages.

The casualisation of labour forces on job sites, aided and abetted by a move from the Morrison government last year to amend the Fair Work Act (2009) to require union officials to pre-register within 24 hours before setting foot on a job site, is said to be a contributing factor to the increase of workplace-related fatalities.

Sally McManus, the ACTU’s secretary, disclosed on Thursday that in the recently-concluded industrial relations reform negotiations, that proposed changes to the Greenfields laws under the Fair Work Act that would have enhanced workers’ protections on site were voted down by some business groups, which McManus identified as the mining and resource lobby.

“These construction projects rely on FIFO workforces, who both live and work on site. They have been plagued with problems related to mental health, with a high number of suicides,” said McManus.

“If there is no means for workers on these sites to address problems as they arise, and they are denied the right all other workers have to renegotiate their working conditions, they must as a minimum have access to the Fair Work Commission to resolve issues so we do not see an intensification of the pre-exiting issues.

“Unfortunately, the mining and resource employers rejected this reasonable and sensible offer and pushed for agreements being doubled in length, expanding the scope so even construction sites in cities are covered and locking workers out of any fair means to resolving issues as they arise,” McManus added.

Lowering the numbers of workplace fatalities should involve issues surrounding fairness, as well as that as compassion towards enhancing policies around OH&S issues, according to O’Brien.

“You cannot hear the harrowing stories of these loved ones left behind and not want to commit to stronger laws protecting Australians in their workplaces,” he said.

“Every year hundreds die in workplaces and their families deserve justice,” added O’Brien.