Each and every week it seems, a minister in the Coalition government will shoot his/her mouth off, desperately trying to defend their ever more obvious incompetence.

It’s hard to believe but Christian Porter, our Minister for Social Services, thinks we don’t have a job shortage problem. Like most of his conservative colleagues, it seems he would rather take a cheap shot at the unemployed than face up to the reality of a failed approach to reducing unemployment.

Just for the record, the facts are that we have over 700,000 people looking for work but only 150,000 or so job vacancies at any given time. But let’s not allow a statistical fact to get in the way of a good slap-down.

Porter is concerned that too many people are refusing job opportunities, particularly our youth, citing as an example, vacancies in the care sector that cannot be filled. It’s a convenient truth.

Apparently our youth are failing to accept jobs available in the care, retail and tourism industries and Porter thinks their reasons for so doing, amount to them wanting something better.

He says people on unemployment benefits think that some jobs are better than others. “There is a sense in Australia that one job is superior to another job, or that one job is a better fit than another job,” he said during an address to ACOSS (Australian Council of Social Service).

Really? So is there no difference between Porter’s job and that of a taxi driver? They both get to serve the public. They both travel in tax deductible vehicles. They are both grossly overpaid and enjoy extraordinary benefits. Oops! No, that’s not right. Porter’s job provides all the benefits, including being grossly overpaid, without producing anything. A taxi driver provides a vital service to the public, gets paid around $10 an hour when actually working, but receives no benefits, not even sick leave or holiday pay.

One would have to conclude that Porter’s job is a much better fit. So is it unreasonable for a University graduate to look for something better than being a carer?

The unemployed are well within their rights to think that some jobs are better than others. They have every right to look for work where they can contribute to something in their chosen field.

What has been Porter’s contribution to the ‘jobs and growth’ mantra beyond head-kicking the unemployed? Or does he feel that being Social Services Minister absolves him from helping find appropriate work for those on Newstart?

What is it about conservative politicians who would blame the victims of bad policy decisions rather than face up to the job of providing meaningful employment? If we take a hard look at factual outcomes we can see why politicians like Porter like creating distractions to hide their failures?

At the time of the 2013 election, 69.8% of all jobs were full-time. Last week’s job figures from the ABS showed the percentage was 68.1%, up very slightly from last month’s all-time low of 67.8%. There are now over 1.8 million Australians unemployed or underemployed.

The facts tell us that the Coalition has achieved nothing of value in the past three years. They are charlatans. They will search for and cling to the tiniest shred of positive news they can, ignoring the trend, ignoring the reality.

The economy today is in worse shape than any period under the previous Labor government. Yet they still intend to give big business a $50 billion tax cut pretending this will create jobs. In reality, it will do nothing for jobs or the economy, but it will put more money into the hands of the 1%. 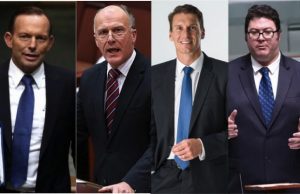 The Coalition barely won the last election; it was only because Malcolm Turnbull was leading them. But not even Malcolm can help them now. He has shown us he is no more than a puppet leader, answerable to the hard right faction of his party.

Why do we think we elect people to govern for the good of the country when the truth is, they govern for their own good and the big money that put them there?

They are charlatans. They thoroughly deserve our scorn.