After proposing then abandoning a raft of manifestly unpopular changes to section 18C of Australia’s racial vilification laws last year, certain members of the LNP have recently relaunched their attack on 18C, under the rather disingenuous pretext of championing free speech.

In the wake of the Charlie Hedbo attacks Cory Bernardi has been out there again, calling for the LNP’s precious 18C amendments to be put back on the table.

Like pit bulls with lock jaw, a gang of radical right wing MP’s including Cory Bernardi, George Brandis, Dean Smith, liberal Democrat David Leyonhjelm, and Family First’s Bob Day have been lobbying hard to ensure we Aussies have the right to engage in hate speech.

Just for clarity, lets take a closer look at what it is they want to change. Specifically they want to have the words “offend, insult and humiliate” removed from the act.

Offensive behaviour because of race, colour or national or ethnic origin

(1) It is unlawful for a person to do an act, otherwise than in private, if:

(a) the act is reasonably likely, in all the circumstances, to offend, insult, humiliate or intimidate another person or a group of people; and

(b) the act is done because of the race, colour or national or ethnic origin of the other person or of some or all of the people in the group.

So in effect what they are proposing is that it would just fine to PUBLICLY “offend, insult and humiliate” someone based on their race, colour or national or ethnic origin, so long as you don’t “intimidate” them.

I think it’s fairly safe to say that most people would find public insult and humiliation somewhat intimidating; so we can assume that the interpretation to be given to the word “intimidate” under the proposed amendments would be “to directly physically threaten”, rather than “to emotionally threaten”.

If these changes were ushered in then theoretically it would be OK if I were to call Tony Abbott filthy, unwashed, lazy, whinging, snaggle toothed, imperialist, stuck up, limey British scum? And that would be totally OK, because I am all I am doing is using racial stereotypes to abuse him, but I am not actually threatening to do him any harm. Of course the truth is that most British people work hard, wash regularly, visit dentists, aren’t seeking to expand their empire, and complain in relatively appropriate measure..:-), but hey why let the truth get in the way of good story.

Unfortunately what these right wing warriors are failing to understand is that the Racial Discrimination Act is not really about protecting the feelings of “white people”. It was drafted in the knowledge that there are ethnic groups in this country that really suffer as a result of constant racial abuse and the negative stereo types that such abuse fosters. To our shame there are many Australians, (most notedly our indigenous brothers and sisters, followed closely by those of African or “middle eastern appearance”) that regularly suffer systemic discrimination in housing and employment on the basis of their race. They are the same Australians that regularly suffer physical abuse in public spaces, and higher rates of detention and incarceration on account of their race. So please let’s not minimise this, these are real consequences, for real people!

Free speech is a noble ideal, but in order for something to be truly free it must come without a cost. Just because hate mongers like Andrew Bolt, Alan Jones and the oh so white fleet of right wing MP’s don’t personally pay the price for their racist tirades doesn’t mean someone isn’t picking up the tab. And too frequently those picking up the tab are the among the poorest and most marginalised members of our Australian family.

If you happen to belong to one of those oft targeted minorities the Racial Discrimination Act may not offer a lot of protection, but it is the thin end of a very important wedge. It is a line in the sand that says NO, we as Australians do NOT want a society where racial vilification and negative racial stereotypes are permitted to fester and stew in the public sphere. We want an Australia that says racists need to be ashamed, knowing that they are on the wrong side of what is morally decent, and on the wrong side of the law. We want an Australia where vile hate speech does land Andrew Bolt in court and up on charges. Mostly we want an Australia that is for the fair go for everyone regardless of race, colour or creed. 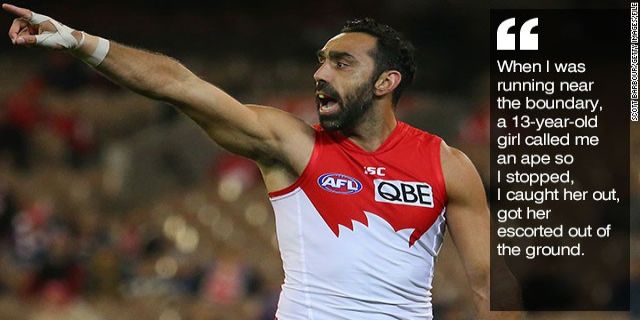 So Mr Bernadi, I say this to you on behalf of all decent, fair minded Australians… GET BACK IN YOUR BOX!!!, we don’t want the hate you are peddling!!!