On October 11, 2009, during the post GFC wash-up, American economist Paul Krugman wrote in the New York Times under the heading, “Misguided Monetary Mentalities”:

“One lesson from the Great Depression is that you should never underestimate the destructive power of bad ideas. And some of the bad ideas that helped cause the Depression have, alas, proved all too durable: in modified form, they continue to influence economic debate today. What ideas am I talking about? The economic historian Peter Temin has argued that a key cause of the Depression was what he calls the “gold-standard mentality.” By this he means not just belief in the sacred importance of maintaining the gold value of one’s currency, but a set of associated attitudes: obsessive fear of inflation even in the face of deflation; opposition to easy credit, even when the economy desperately needs it, on the grounds that it would be somehow corrupting; assertions that even if the government can create jobs it shouldn’t, because this would only be an “artificial” recovery. In the early 1930s this mentality led governments to raise interest rates and slash spending, despite mass unemployment, in an attempt to defend their gold reserves. And even when countries went off gold, the prevailing mentality made them reluctant to cut rates and create jobs.”

Today, our Australian government is doing exactly what Krugman argued against, with the exception of raising interest rates. This time, however, it is not to protect our gold reserves. We have none. Peter Costello sold them off years ago at bargain basement prices.

This time, it is to protect us from the myth of public debt. And just what is this debt? The Australian Office of Financial Management displays this debt as a permanent fixture on its website for all to see. As at 31st December 2016, the total issuance of treasury bonds and notes is $464,791,000,000.

This is gross debt. This is the figure upon which interest is paid. These days it is more common to hear government members quote net debt because it enables them to subtract the value of the Future Fund (currently around $125 billion) and so doesn’t sound quite as frightening.

But gross debt is the big ticket item, the one those same government members were all too willing to quote when Labor was in power, the one that supposedly costs us $1 billion in interest per month. 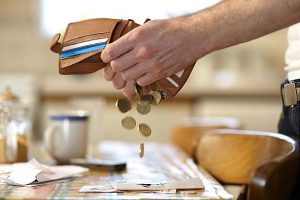 This debt comes about because Treasury runs our economy as if it were a household. If the incoming flow of tax receipts does not cover the outflow of government spending, it directs the AOFM to tender for the sale of government bonds to cover the expected shortfall.

But this is no more than an academic exercise. The government is not a household. It is the currency issuer of Australian dollars and can never run out of money. It never needs to borrow any more than it needs to collect taxes.

The bond issues are purchased by a variety of institutions both here and offshore. But they are only ever issued in Australian currency and are therefore never at risk of default. They can always be repaid independently and regardless of the state of our economy.

Furthermore, they do not fund government spending. All government spending is new money issued by the Reserve Bank of Australia (RBA). If you doubt this, ask anyone who has bought these bonds to show you their certificate. The money they have given the government in exchange for that certificate sits in an account in their name at the RBA.

So, the Treasury documents that are issued as part its accounting responsibilities and which reflect an accounting sheet balance of income and expenditure plus debt issuance, are no more than a mythological construct to give the appearance of good housekeeping.

There is no debt. Furthermore, the interest paid on the bonds is also newly created money. It is shown in the budget papers as an expense but it should, more accurately, be an RBA transaction like any other bank and not a part of the national budget.

If the government were really looking for savings, they need look no further than the $12 billion per year the RBA pays its bondholders. That money could be removed from the budget expenditure side, immediately. So why don’t they? The answer to that question takes us back to Paul Krugman’s article.

The government, like all western economies, still maintains a ‘gold standard’ mentality. It’s a reflection of its collective macroeconomic ignorance. And in maintaining this ignorance, it is overlooking the real threat to our economic well-being: that of private debt.

In acting this way, they are playing right into the hands of the super-rich who want a permanent pool of unemployed workers, a low paid workforce and less government interference in corporate oversight.

It’s high time we brought an end to this deception and the fantasy of government debt.