At the launch of Paul Kelly’s latest book Tony Abbott disagreed with the author’s assessment that Australia’s democratic process was in crisis. He said there wasn’t a crisis that if there was a fault it was with the people who inhabit politics from time to time. It was a dig at Labor but inadvertently he drew attention to his own kind.

Since the airing of the 60 Minutes Ashby interview the murk of conservative gutter politics, with regard to the Ashby/Slipper Affair, has worsened.

James Ashby has left himself open to charges of perjury and Mal Brough (a private citizen at the time) has all but confessed that he incited Ashby to steal Slipper’s diary. 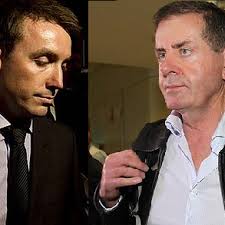 Coalition gutter inhabitant Christopher Pyne has contradicted himself in saying that he had no direct knowledge of Ashby’s accusations other that what he read in the papers. Yet it is alleged he had a meeting with him to discuss the matter and might have offered him some form of job security.

He confirmed that he raised a possible Coalition win at the Queensland 2012 and federal 2013 elections as chances for Mr Ashby to secure a new job.

Before moving on consider this, why did channel nine wait until September 7 to air the interview? It could have done so while parliament was sitting, thereby giving 60 Minutes maximum exposure. Questions would have had to be answered especially by Brough and Pyne.

Had they aired it a week earlier, on Sunday 31 August, it would have been at the start of a Parliamentary sitting week.

It has been suggested that Ashby was paid $100,000 for the interview and the PR man for Harmers Workplace Lawyers, who have been acting for Ashby on a no-win, no-fee basis, is Anthony McClellan, a former Logie winning chief of production at 60 Minutes.

As it stands now Labor backbencher Graham Perret has asked the AFP to urgently investigate the case. It is difficult to imagine they wouldn’t given Brough’s confession on 60 Minutes:

“I would urge the Australian Federal Police to proceed with its investigation immediately, especially given the risk of disappearance for vital evidence.”

The AFP says it has received Mr Perrett’s letter and is “evaluating the matter”.

Further to that, Mr Perrett’s caucus colleague, Victorian Labor MP Michael Danby, has said he will ask the Commonwealth Director of Public Prosecutions to examine whether Mr Ashby has perjured himself by changing his story on whether he was offered any incentives to make a sexual harassment claim against his then boss Mr Slipper.

“Taking him at his word, James Ashby claims to have been induced by Liberal MPs into making his sordid claims against Peter Slipper. What he told 60 Minutes last night about these alleged inducements directly contradicts what Mr Ashby put on oath in a sworn affidavit?”

I am still seething at this outrageous attempt to eject the Speaker of the House of Representatives and in so doing attempt to overthrow the government of the day. The case brought by Ashby, and the political involvement of Abbott, Pyne, Brough, Roy and undoubtedly many others, was an affront to our system of government. And the Murdoch media were most likely complicit in the sordid affair.

Let’s take a few steps backwards and look at the sequence of events. Sexual harassment claims were made by Ashby against Slipper. Justice Rares found that it was a vexatious claim and that its real purpose was to bring down the Speaker and cause as much havoc as possible to the minority government.

Later his judgement was overturned by the full court in a split decision and as a consequence we had two judges saying it was more to do with law than politics and two others saying the opposite. The appeal court determined that it should go to court to be sorted out. But then Ashby withdrew making a mockery of the court’s decision. Or, more likely, he didn’t have the money to proceed.

It has always been about power and the price conservatives place on it. In this case they were even prepared to subvert our democracy to obtain it.

Who knows where this will all end up? Will, as they should, the AFP investigate it? Will the DPP take up the matter of perjury against Ashby and possibly warrant a retrial? Why did Ashby go to Wyatt Roy of all people? And once the QC Mr Russell told him there would be no guarantee of a job why didn’t he go back to Pyne and demand an explanation? How did Ashby get the job with Slipper and was he aware of his reputation for sleaze? What was Palmer’s involvement and that of other Queensland National Party members?

Both Pyne and Abbott insist they had no specific knowledge of the events but both are contradictory and by inference say they had a general knowledge. We need to know exactly what that was. Abbott for example needs to explain the mystery of how a press release calling for Slipper’s resignations was on the streets the moment the Telegraph went to press with the story. Metadata records even suggest that the press release was prepared prior to the Telegraph story. Remember the Telegraph was leading the media charge.

And of course within the Federal Court there is an application from June for the Commonwealth to pay $1 million for Ashby’s legal costs. WHY?

“It’s not the system which is the problem, it is the people who from time-to-time inhabit it. Our challenge at every level is to be our best selves.”

He should take note of his own words.

“Good democracies can only deliver good government and outcomes if the electorate demands it”.