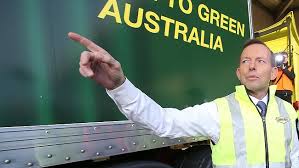 Have you heard the joke about Abbott’s Green Army?

Answer: They’ll be working for half the minimum wage, but to make up for that they’ll be exempt from Commonwealth workplace laws, including the Work Health and Safety Act, the Fair Work Act and the Safety, Rehabilitation and Compensation Act.

Relax! It only applies to people who are betwee the ages of 17-24. It’s not like the Abbott government expects older people to be part of this government initiative. It’s just a way of showing everyone that the Age of Enlightment is over.

And it hasn’t come in yet. When it comes to politics, governments often float an idea and when the opponents campaign against it, they bring in a less objectionable form of the idea, and while this doesn’t mean that everybody’s happy, it does take the wind out of the sails of the protests. “No, we were never intending to include human babies in our live meat export – that was just hysterical nonsense from the loony left – we’re only going to remove restrictions on live animal exports and ban graphic film of animal slaughter, because only a truly sick individual would want to see animals being slaughtered.” Mind you, in the Abbott government’s case, quite a few of their decisions have been worse than the ones they’ve floated. For example, there was the idea that ministers would be prevented from speaking their mind by Abbott’s office, but, in fact, Christopher Pyne was allowed to share his thoughts.

So, what’s the logic behind the Green Army being paid less than the minimum wage? (Mm, not sure if that’s an oxymoron. I mean, if they’re working, and that’s what they’re being paid then doesn’t that mean that we have a new “minimum wage”?)

If you look at it from the point of view that it’s a legitimate job, and part of the election manifesto of of Coaltion, then what’s the justification for not treating it in the same way that you’d treat any other election promise? They didn’t, for example, ask the Committee of Audit to work for less than the minimum wage. Why, also, the exemptions from the Work Health and Safety Act, the Fair Work Act and the Safety, Rehabilitation and Compensation Act? Surely, if it’s something you see as important then surely you’d resource it and pay for it like any other infrastructure project. And, what’s the plan if they can’t find 15,000 people willing to work for such workhouse-like wages?

On the other hand, if you look at it as part of a “work-for-the-dole” scheme, it makes the Direct Action promise of the Green Army to combat climate change seem just a bit half-hearted. If someone suggested that we use a similar scheme to improve healthcare or protect our borders, we’d be told that we need professionals for such an important job. Climate action, on the other hand, just grab a few long-term unemployed to bung in a few trees and pick up rubbish. There! We’ve kept out promise AND reduced youth unemployment for those who “really want to work”!

Yes, I’m sure that we’ll have some hard hitting report about the laziness and lack of initiative of our young:

“He said he wasn’t coming back because he got sunburnt and he was concerned about skin cancer. I suggested that he buy himself some sunscreen, but he said it wasn’t worth it on what he was paid, but I notice that he still found himself enough to buy a cup of coffee before coming to work.”

A cynic might suggest that this is part of a plan to drive down all wages – that this will make young people more inclined to accept other jobs for slighter higher money. But do that at a time of rising unemployment when employers hold the whip hand anyway? And why would a government concerned with the Budget bottom line want to do that? After all, the more we’re paid, the more taxes we pay. (A bit simplistic, but why should I let the Liberals have all the fun when it comes to reducing economics to slogans?)

At no point do I remember the Liberals telling us that their Direct Action, their Green Army was just a “work-for-the-dole” scheme named by a PR consultant. I do have their “Real Solutions” booklet, and while it does talk about creating higher wages and getting young people back into the workforce – admittedly, not in the same into the same paragraph – there’s no suggestion that the Green Army is something that relies on having a pool of young unemployed to draw on.

Mr Hunt found it “bizarre that anybody would oppose, at this time, a youth training program that helps the environment and increases, significantly, the youths’ wages.” This, of course, is only if that youth is unemployed or working part-time. Still, I thought Mr Hunt was Minister for the Environment and Inaction, not the Minister for Employment.

In a similar vein, will we see schemes where the Minister for Education, rather than being concerned about the quality of teaching, praises schemes where young unemployed people get the chance to improve their skills by being put in charge of classes. Or the Health Minister? Or the Science Minister…