Last week’s farce enacted in parliament, where the government lost control on three voting issues, is but a symptom of a much broader problem. These incidents demonstrated that it is unable to control the parliament and unable to govern.

The government is a deceptive rabble falling apart both physically and psychologically. Its supposed strength, economic management, is a lie, a thinly veiled smokescreen hiding a mountain of incompetence.

The economy, about which they fumble and stumble trying to explain, is stagnant. It requires an injection of stimulus the Coalition is incapable of making because of its flawed ideology. They are taking themselves, and us, in the opposite direction, headlong into a recession.

The Australian government is the currency issuer of Australian dollars. Its refusal to recognise its own sovereign power exposes its incompetence. It can afford to buy anything that is available in its own currency, without recourse to borrowing or collecting taxation. And, it has a responsibility to spend what is necessary to ensure that every Australian who wants to work, is able to do so.

These simple facts expose the treachery of the neo-liberal ideology that continues to dominate the way in which the Australian economy is managed.

That people cannot find work and are reduced to a welfare payment that is inadequate to maintain a reasonable standard of living, is a betrayal of their rights. That they are then demonised as dole bludgers compounds this betrayal.

That a currency issuing government pretends to borrow money that it creates, is an oxymoron. It is a traitorous act and defies an unwritten contract that implies if people can work, they should be working, not receiving welfare and that the government should be providing that work.

Unemployment represents a failure of the government’s inherent responsibility. Likewise, a government that borrows in its own currency is ignorant of its own sovereign power. How much longer do we tolerate this absurd conduct?

There is absolutely no need to fund deficit spending by selling bonds any more than there is a need to issue securities to fix an interest rate the RBA pays on bank reserves. 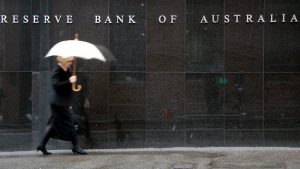 The government can instruct the RBA to set a rate at which they will pay interest on reserves and have it pay that directly to the commercial banks. That becomes the target rate.

Commercial bank reserves do not need to be drained from the money supply. It doesn’t matter what the level of reserves are. Commercial banks don’t require reserve funds to lend. They require willing borrowers.

Measures to support bank reserves don’t expand credit. This was the reason QE failed to stimulate the economies of The US, the U.K. and the Eurozone. For every successful lender there must be willing borrowers, not billions in reserves. There weren’t any.

Another great myth on money creation is that it is inflationary. Inflation occurs when too much money chases too few goods. Money creation specifically targeted at employment cannot be inflationary because it stimulates demand proportionate to the level of employment it creates.

It is inconceivable that a program of reduced government spending in a sluggish economy could stimulate growth. It is simply a flawed policy, particularly so here in Australia, where the level of private debt is at 150% of GDP, the highest in the world.

The government’s “jobs and growth” mantra is a hollow effort designed to convince the public that it knows what it is doing. It doesn’t.

What will it take to get these simple facts into the minds of the voters and expose this treasonous activity?