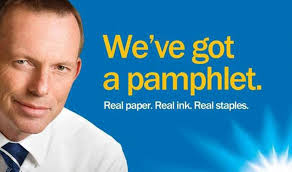 Holistic: characterized by the belief that the parts of something are intimately interconnected and explicable only by reference to the whole.

Our current government has one very short term goal with a single-minded focus on how to achieve it. “Growth” is the goal and “lifting the tide” is how we will make it happen. If I could give you more detail I would but, from everything I have read and listened to from the Coalition, that’s as much as I know, and I have an uneasy feeling that it’s as far as they have planned.

Tony doesn’t want his agenda “cluttered up” with anything else. He doesn’t want the G20 leaders talking about those pesky distractions like climate change or income inequity. He has boarded the SS Big Business and it’s full steam ahead.

The only problem with this one-directional thinking is that it neglects every other aspect of life with no thought to adverse side-effects.

The push for privatisation is fraught with danger. It usually leads to job losses, increased prices, and reduction of services to rural areas. In some cases, like that of British rail and potentially Qantas, government subsidies end up being higher than when the service was state-run. Private firms exist for one reason – to make a profit for their shareholders. They are not obliged to consider the greater good.

Selling off assets must also be approached with caution with consideration given to the loss of future revenue. Peter Costello will be remembered for selling two-thirds of Australia’s gold reserves for the rock-bottom price of $US306 per ounce, a decision that cost us about $5 billion. (Today, gold is about $US1,370 per ounce).

Cutting company tax is also on the cards. I don’t understand the justification of this. It is far more likely that increased profits will be passed on to shareholders rather than used to employ more people. Demand drives markets. Any extra money that low income earners receive would be immediately passed back into the economy thus lifting demand leading to increased production leading to more jobs and increased profits. If you think helping the top 1% drift off into the stratosphere will “lift the tide” you don’t really understand the dynamics of waves.

There has been talk of a special tax zone in the north and amnesties for offshore tax evasion. In fact, every discussion and decision seems geared towards clearing the way for the rich to get richer.

”We are placing our stamp on the economic policy of the country and let there be no doubt, let there be no doubt, that Australia’s policy direction changed very substantially back in September of last year. Australia, at the official level, went from being a high-tax, high-regulating government to being a low-tax, deregulating government. That’s a very, very big change. We expect everyone in the system to be working enthusiastically with us as we reshape our country to provide more jobs and greater prosperity for all.”

As we rush into this gluttonous feeding of the corporate body, we are neglecting every other aspect of our being.

The wisdom and experience of men like Bernie Fraser, Ken Henry, Ross Garnaut and Martin Parkinson is ignored, silenced, and cast aside. Scientists, researchers, expert advisers all find themselves unemployed. Our brain has been cut off from communicating with the rest of us.

Unions, charities, advisory bodies, environmental and health and safety regulations, workplace entitlements – all are under attack – disbanded, defunded, discredited, deregulated. Our legs, that help us take careful steps forward, have been amputated.

People who flee atrocities and come to us seeking safety are locked up indefinitely in atrocious conditions with no hope for the future. The poor are described as lazy, the disabled as scammers, the disadvantaged as bludgers. Our heart is broken.

The Minister for the Arts is threatening to remove funding from artists who choose to protest against government policy. Our soul is shrivelling up.

Mouthpieces are lying to us and propaganda is causing us to self-harm. Media offices and lawyers rooms are raided. Information is withheld and opinions manipulated. Misinformation is spread widely, dividing the community. Instead of holding out our arms to lend a helping hand, we have our left hand engaged in a bitter arm-wrestle with our right hand.

The many fingers and toes that make up our society – the workers, the children, the aborigines, the elderly, the unemployed, the different ethnic groups, the refugees, the poor, the disabled – are slowly being squeezed in an iron grip.

Our reputation as a reliable nation, a nation with integrity, willing to shoulder more than its fair share of the responsibilities of the world, has been trashed.

And in perhaps the cruellest thrust of all, they are prepared to destroy our planet, our home, to feed this bloated corpse.

Money may make the world go around but, unless we adopt a more holistic approach to society and governing, it will be a lifeless rock, devoid of humanity, aimlessly spinning its way to oblivion.