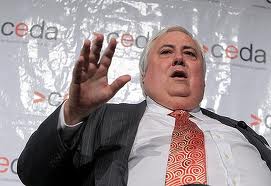 Clive – what does he want? (image by smh.com.au)

The first Joe Hockey budget is about to be presented to parliament and to the people. There has been plenty of speculation about cuts to pensions and introducing Medicare co-payments, but it would still take a brave journalist to try and pre-empt what it will really contain. However, if any of the language being used both by Hockey and other ministers is close to the mark, it seems this government will dodge what is really needed. The one unknown they will have to contend with is Clive Palmer and his senate team. Will Clive roll over and wave the bills through the senate or will he make Abbott and Hockey sweat? Labor would do well to take a much closer look at this interesting development in the Australian political setting. Is it possible that the Palmer United Party isn’t all that concerned about the carbon tax and the mining tax and will not support its repeal? It’s possible.

While there is ample room for Hockey to cut some wasteful programs put in place by the Howard government, the real problem is falling revenue. And that means increasing taxes across the board. It also means NOT removing them, as in the case of the carbon tax and the mining tax. It means dumping election policy commitments such as Direct Action and the Paid Parental Leave Scheme. But is any of this likely to happen?

All the signs at the moment suggest not. Rather than upset their own constituency too early in the piece they will, I suspect, hit the broader community, the aged, the disadvantaged, the unhealthy, students and families; those areas where they think traditional Labor supporters most likely nest. That is their usual form. Apart from a brief period when the Howard government had shiploads of money coming in and looked like losing the 2004 and 2007 elections did they shower money on the very areas they will now attack to balance the budget. All the speculation and the rhetoric point us in this direction. Yet all of this could be avoided if they were to concentrate their efforts on the other side of the ledger, i.e. revenue. There are plenty of opportunities to raise additional revenue from increased personal tax to the GST to diesel fuel excise, but that means breaking election promises.

In the meantime Clive Palmer’s success at elections has opened up the possibility of a new dimension to his political aims, whatever they were or are now. His recent comments and his Northern Territory coup d’état suggest he is more interested in appealing to the broader electorate than furthering his own business interests. He opposes any cuts to pensions and has ridiculed the Coalition’s Direct Action approach to climate change. He also has a keen eye on the Victorian State election in November this year. All indications are that Labor will regain office after four years of Liberal mismanagement and disunity. A good showing for the PUP in Victoria could convince him that his political ambitions weren’t misplaced and that the next federal election could bring even more influence in the running of the country. To that end he would likely be persuaded to appeal to a broader base across the country.

The Commission of Audit has done its job and we should know its recommendations this week. In an atmosphere strikingly similar to the Henry Tax Report, Hockey will likely cherry pick the items that best suit the Coalition mindset. Much will be made of what is perceived as broken promises and the spin doctors will tell us otherwise. They will try to avoid another Gonski debacle. This time they will use well crafted language to justify their decisions. But the electorate will see through it anyway. And this time, Abbott and Hockey will also have to contend with Clive.

I suspect Tony Abbott and Joe Hockey are asking the question: What does Clive really want? It deserves more thought than most journalists are giving it. We only have to recall the success Don Chipp and his Australian Democrats had with disaffected voters in the eighties and nineties. There is a similar feeling in the air today and I think Clive Palmer has sensed it. Politics is an infectious animal. Popularity can be an alluring, beckoning charmer. Power is a far greater aphrodisiac than personal success and the timing couldn’t be better. I suspect the electorate is already well and truly over Tony Abbott. His leadership credentials just don’t stack up. There were similar thoughts about Malcolm Fraser in the late seventies. That prompted Don Chipp to make his move. His ‘keep the bastards honest’ campaign resonated well with disaffected liberals who then split their preferences equally between The Coalition and Labor. It could happen again. We know from similar past forays that the Palmer United Party probably won’t last. The DLP, the Democrats and One Nation are a testament to that. But for the time they are here they can wield enormous influence in the short term.

Joe Hockey’s management of the economy is the key. If he stuffs up as John Howard did when he was treasurer in the Fraser government, the Coalition will be in deep trouble with no small contribution from Clive Palmer. History has a way of repeating itself when no one pays attention to what is really happening.