I am hoping to raise funds to help Annette Paul, an Indigenous Australian living in Coonana; a remote community that the Western Australian government has cancelled all funding to.

Slowly, the people of Coonana left their traditional home and moved to other communities such as Tjuntjuntjarra: a 7-8 hour drive north east of Coonana and 170ks west of Kalgoorlie. 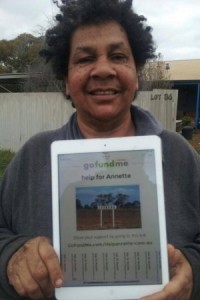 Annette is now the only person living in Coonana. Rightly so, she refuses to leave because of her close connection to country. She has many relatives that have passed, including her mother, and they lay at rest in the Coonana cemetery. She is worried that if she did leave, what would happen to Coonana, her home and her country.

Annette survives by relying on her sister Delphine to deliver bottles of water, food and other basics she needs to see her through until the next fortnight. Some nights she goes without basic essentials.

The funds I hope to raise will go towards and include a solar power package to provide power in her home, a large rain water tank for fresh drinking water, and a reliable vehicle so Annette’s sister can continue to deliver fresh food.

If you are able, please donate to Annette via this link. Let’s also show the Western Australian government that it is not that easy to break a person’s spirit.