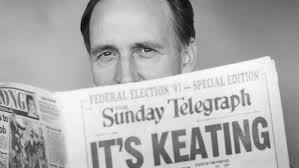 I’ve written before about the need for progressives in Australia to unite. Before the election, I hoped that progressives would see the risk of Abbott as too great, and would unite to keep him out. I thought this was more important than in-fighting and sniping between different groups on the Left. But alas, it didn’t happen and unfortunately it’s still not happening.

In a particularly characteristic debate I had this week with a type of Tweep that represents the problem with the Left, I was told, after writing about my outrage at Cory Bernardi’s comments and the lack of genuine condemnation from Tony Abbott:

“Perhaps you enjoy being perpetually outraged or something. Fine, carry on…”

This implies that I am outraged about Bernardi for my own entertainment, not because, lo and behold, I am incredibly outraged. It also implies that my outrage was exaggerated, that it was unimportant and that it did nothing. Apparently we should ignore members of our parliament who disparage groups of our community because, you know, that’s just what they want. To be criticised. Actually I don’t think that’s what they want. I think Cory Bernardi and Tony Abbott, and the rest of the Liberal National Coalition, wish that this sort of outrage on the Left would disappear so that there wasn’t always such a fuss when they tried to bring the country closer to their ideal state. And that’s what the Left need to come to terms with. Everything in politics is about what sort of society we want to create.

When I asked this Tweep what he would prefer we were all talking about on Twitter, other than condemning Bernardi’s remarks and reminding the community that Bernardi’s views are not acceptable, nor to be tolerated, I was told we should be discussing single mothers on Newstart. What a HUGE coincidence. This person wasn’t interested in criticising Bernardi. Because he wants people criticising Julia Gillard. And this is the problem with a huge number of people on the Left, who are definitely over-represented in my Twitter feed, who are no doubt representative of a wider group in the offline world too.

These people don’t want a hero on the Left to unite progressives to help us bring about crucial policy reform. They want to bitch about the problems with the Left. The Gillard Labor policies they don’t like. It’s always the same. Single mothers on Newstart. Asylum seekers. Gay Marriage. No matter that Gillard is no longer the Prime Minister. No matter that the single mothers on Newstart policy was Howard’s policy. No matter all the other policy successes of the Labor government that these people conveniently ignore. No matter that Abbott is now Prime Minister, and yet these politically engaged people still want to spend their time discussing the Gillard government and what’s wrong with Labor, and the Rudd vs Gillard debacle, with their overarching argument being that politics is shit, and everyone is as bad as each other, and it doesn’t matter who you vote for because you’ll get more of the same.

What comes with this attitude is also some more underlying arrogance that will be very familiar to people who discuss politics on Twitter (again a group representative of a wider community outside of social media).

So back to my mention of the sort of society I want. I am not afraid to say that I do barrack for the Labor Party. And I’m sick of people implying that this barracking makes my opinion less valid, because that is bullshit.

The reason I barrack for the Labor Party is because I have a very clear vision of my desired outcomes from politics. And I can say with absolutely certainty that Labor will bring me closer to my desired political outcomes than the Liberal Coalition will. It’s really that simple. Big picture stuff. In the great tug-of-war between the interests of labour and capital, there are too many who should have their hands on the rope of the labour side who are instead too cool for school. They are off in another playground, using their rope to skip. I’m sure they’re getting very fit from this activity, but they’re contributing nothing other than a personal sense of satisfaction. And without all progressive hands on the rope, the right-wing side, capital, is winning.

Abbott’s only been in power for four months and every day we are learning, with alarming speed and scale, just how different a country Abbott wants Australia to be, at the other end of the continuum from the Australia I barrack for. We now have a climate change denier in power. We have environmental regulations being dismantled. We have culture wars over the national curriculum. We have secrecy over the actions of our government in managing asylum seeker arrivals. We have cuts to social welfare targeting the disability pension. We have right-wing-cronies being given public office and business lobbyists being handed the keys to the budget. We potentially will see a user-pays system replace universal healthcare. This is just a snapshot and shows just how much outrage does need to be assembled to fight this Abbott vision for Australia.

I’m not going to stop fighting, or barracking as some people call it. The Labor Party is not perfect. No political party could ever please everyone all the time. But while the Left fixate and fragment to bicker amongst ourselves, and while the smug ‘I’m above this outrage stuff’ put down those who are trying to reinstate the policies we want, some progressives are not just taking their hands off the rope, they’re getting in the way of people trying to fight the fight on our behalf.

I still find it hard to come to terms with the fact that this country elected Tony Abbott. With the economic success of the previous Labor government, and the urgency about taking action on climate change, we’ve ended up with the least beneficial political party in power at the exact worst time for this country. It’s a disaster. There’s no other way to describe it. Perhaps I’m wrong about needing a hero. I was thinking someone needs to find a way to unite progressives, to get us back on track, fighting for the policy outcomes that bring the country closer to our ideals. Perhaps we don’t need one hero. Perhaps we need many. We need many more heroes and many less smug assholes. We need heroes with hands on the rope before Abbott’s government pulls us so far to the right that we’ll never find our way back.