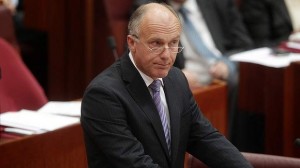 Senator Eric Abetz gave a rather disturbing speech to the Young Liberals (aged 16 to 31) national conference in Perth on 25 January this year.

He told them that, over the Christmas break, he had watched American political tv series House of Cards.

“Whilst it was a good watch, the moral bankruptcy, the crass manipulation, the cynicism, were for me all turn-offs.”

I know how he feels, though he apparently assured his son that Canberra politics wasn’t quite as portrayed in House of Cards.  He also assured him that:

“Congressman Frank Underwood engaged in all his unsavoury intrigues in the House of Representatives, and that such things could never happen in the Senate.  I also pointed out that the US Democrats were the equivalent to Australia’s ALP”.

Right.  Did you also remind him, and your audience, that it was a fictional tv show, or are you preparing them for the “we good them bad” indoctrination where fiction will be accepted as fact?

Speaking of which, Senator Abetz also read a book by Hal Colebatch called “Australia’s Secret War” which he described as “a thorough, detailed exposition of how individual unions and their leaders acted to sabotage our nation’s war efforts in World War II.”  He went on to say:

“Hal Colebatch has recalled this painful chapter of Australian history which saw Australian unionists engage in a range of sabotage actions that were utterly unconscionable.

That systematic campaign of sabotage criss-crossed the nation, from Townsville to Fremantle, and cost the lives of countless Australian diggers and allied soldiers.

Their actions included deliberately damaging planes, removing valves from radio transmitters that made them inoperative.

Packages and parcels for our service personnel were pilfered.  Coalminers and munition factory workers went on strike prejudicing the war effort, costing lives, leading to unnecessary loss and increasing the length and cost of the war.

These are very damning accusations to make, but he doesn’t stop there.

“So I do ask: where was the moral outrage of the ABC and Fairfax commentariat when Hal Colebatch exposed all this in his groundbreaking work?

People killed, people injured, the war effort severely compromised – murder, grievous bodily harm and treason, all at the doorstep of the union movement and all largely ignored.

Talk about a topic for inclusion in the national curriculum!”

And so it begins.  The history curriculum rewrite starts with a union-bashing book published last October from “a secret history rescued from ‘folk memory’ – and one previously suppressed by leftists.”  Anyone who was 20 years old at the start of the war would now be about 95.  I’m not sure we should be basing the curriculum on their anecdotes.

Rowan Cahill points out that:

“Colebatch has form, as they say in the classics. He is the third son of the short-term (one-month) twelfth premier of West Australia, who accompanied strikebreakers onto the waterfront during the bitter Fremantle wharf crisis of 1919, an inflammatory action which contributed to the death of trade union loyalist Tom Edwards following a police battoning.”

Needless to say, Alan Jones gave it his immediate ringing endorsement and, when that other expert journalist, Miranda Devine, pre-reviewed Colebatch’s book in November, a contributor to her blog posed the question:

“Where is the media campaign pushing for the unions to abase themselves and seek forgiveness for the very real harm they did to Australians?  Unfortunately in Australia in 2013 that seems too much to ask.”

“The union movement must provide a national apology for prejudicing the nation’s war effort, remembering those families who needlessly lost loved ones because of their treasonous activities.

Instead the MUA is currently funding a hagiography about the refusal by wharfies in 1938 to load pig iron destined for Japan – an incident the Left is still milking for indignation.”

They apparently want the unions to say sorry for the actions of people who, 76 years ago, refused to send iron to aid Japan’s gearing up for war, but John Howard had nothing to say sorry for because the Stolen Generation never existed?

The Senator then goes on to praise Cory Bernardi’s book and his comments about non-traditional families.  He responded to the offence taken by step-dad Bill Shorten this way:

You know the trip; “I claim victimhood.  I declare that I have taken offence.  So you cannot question me or assail me with undisputed, objective studies”… studies which actually tell us time and time again that the gold standard for the nurturing of children is a married man and woman with their biological children.

He gives a quote from Senator Bernardi’s book about the likelihood of girls from non-traditional families ending up promiscuous and boys as criminals.

He claims the source of these statistics was President Barack Obama’s Father’s Day address of 2008.  I know the Liberals would like us all to emulate the Tea Party but thankfully, Australian society is still a lot different to the US.  Medicare, the PBS, minimum wages, penalty rates, all contribute to making life just a little easier for our low income earners compared to their US counterparts.  Gangs don’t have the same hold here (yet) and we have strict gun laws.  We do have problems with housing affordability and youth unemployment but comparatively, our safety net is better.

Abetz then sinks even lower in my mind by saying to the kids:

“So can I say to those who in turn might say they were brought up by a single parent, or in a blended family, and turned out okay, take pleasure in this, but ask, was it the ideal?

Would life have been even better if, all things being equal, you had been brought up with your other biological parent coming home every night to provide an even more nurturing environment?”

I wonder if anyone had the courage to stand up and say “It was better than watching my father continually humiliated or seeing my mother get hit or watching two desperately unhappy people drift ever further apart”.  I wonder if anyone talked about the love and support their adoptive parents gave them, something their “biological” parent/s were unable to do.  How dare he make these children feel their lives were less than “ideal” because of decisions made by others when he has no knowledge of their circumstances.

Speaking of criticism from within his own party which dismissed Bernardi’s as a minority view, Senator Abetz said:

“I have no doubt that for centuries it has been the majority view and that only in the last thirty or so years has this view come to be questioned by a number of social theorists, commentators and interest groups.

I am delighted that reputable commentators like Piers Akerman, Andrew Bolt and Paul Sheehan exposed the hollowness of many of the criticisms of Senator Bernardi’s book.”

Because they would know better than “social theorists” I presume.

And of course, he couldn’t finish without reference to our Christian heritage:

“in the past twenty years we have realised that the heart of your culture is your religion, Christianity…  the Christian moral foundation of social and cultural life was what made possible the emergence of capitalism and then the transition to democratic politics.   We don’t have any doubt about this”.

If communist academics from China can get it, I would’ve thought it would be a no-brainer for say Senator Lee Rhiannon and the Greens, who are pushing to remove reference to our Christian traditions by expunging the Lord’s Prayer from Parliamentary proceedings.”

As he was concluding, I finally found myself surprisingly in agreement with Senator Abetz when he said:

“I believe that the Liberal Party too often has sold itself short by over-concentrating on matters economic, vitally important though they be – vacating the ground when it comes to our society’s actual foundations.

As we restore our economic fortunes, let us also remember that to succeed in that task we need to restore the societal capital, the values and the foundations of our nation’s non-economic features. To ensure the social legacy we leave future generations will determine the economic foundations and structures that we also leave behind.

Australia’s economic security will ultimately be a reflection of its societal security.

Can I also encourage you, in your discussions with family, friends and colleagues, to respectfully remind people that the future well-being of our nation is not wrapped up in the economic management of our nation, but ultimately in maintaining the social and cultural values and traditions that have in fact given us the unparalleled personal freedoms and wealth which makes us the envy of the world.”

It scares me when he says stuff like that.  What does he really mean?