Over the coming months as the federal election draws closer we are going to hear a lot about tax reform, fiscal deficits, GDP growth and a myriad of macroeconomic terms few understand and even fewer could properly explain. In a way that’s a good thing because most of what you will hear is simply not true.

You are going to hear a whole lot about the need to “get the budget back to surplus” to “live within our means”, that the country, “can’t afford continuing increases in health, education and welfare spending” and a host of other quite meaningless statements that sound reasonable when delivered in the context of everyday life.

If, however, you were to understand properly, the difference between what we comprehend as “everyday life” and the everyday life of a sovereign currency issuing nation, you would know that the two situations are worlds apart.

Every day, we are exposed to macroeconomic terms through media broadcasting and print journalism, without a proper explanation or education as to the terminology used or the concepts associated with these references.

They are presented to us within a framework of common sense logic that has its genesis in household economics. So that when we apply household economic logic to what we hear, we happily accept it as perfectly clear and reasonable.

Thus our understanding becomes trapped in orthodox concepts that are false and misleading and when matters of fact are explained by someone outside an orthodox sphere of influence, those facts are dismissed as crackpot theories. 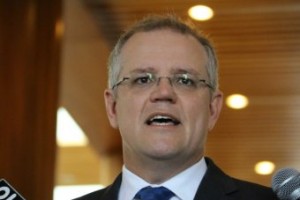 The result is that decisions will be made by government that undermine prosperity and subvert public purpose. This is precisely where we are, in this country, today. Decisions about tax reform and welfare spending are being formulated to undermine our prosperity and further widen the gap between the haves and the have-nots; in short, to increase inequality.

There are a few things, however, we probably won’t hear very much about. One of them is unemployment, another is debt. Why? Because, using that same household economic reasoning, the situation today is much worse than it was back in 2013 when 53% of voters decided the nation needed a new national government.

As both major parties contributed to that situation, the current government more than the previous one, neither will want to discuss it.

Right now, decisions are being made by both major parties heading toward the election, which will be presented to us as policy and which will be delivered in the context of household economic common sense.

And, in doing so, not one word of it will be true, because the premise upon which it is based, is false. The end result will cheat us out of our right to be provided with proper housing, proper health care, a world class standard of education, welfare for those in need and a job for everyone who wants one.

By engaging that excess capacity, i.e. the unemployed, we automatically increase demand for existing goods and services, we increase production of sought after items which increases our national income, our GDP, which makes us all a richer country. It’s not rocket science.

But when we have two major parties, both of whom voluntarily imprison themselves within a neo-classical mindset that says we must live within our means, curb spending and raise taxes to bring us back to surplus, who talk to us in household economic language we have been conditioned to accept, the understanding and therefore the power of a sovereign currency issuing nation is lost.

With that loss goes the opportunity to lift our living standards, protect the disadvantaged, show compassion for those fleeing persecution and restore equality for us all.

We are governed by idiots who cannot see that their neo-classical approach to macroeconomics is not just flawed but is deliberately constructed to service the 1% who control the flow of money, who control governments around the world and the way in which resources are distributed. That same 1% also control the wealth and the flow of information, i.e. the way the media inform us.

If you believe nothing of what politicians tell you leading up to this election, you will be the better for it. If you want to learn the truth then first learn this: The taxes you pay DO NOT fund government spending.

Learn that and you have taken the first step on a jaw dropping journey, one that puts you ahead of politicians and the stupid things they say.

Here’s a good place to start: