The second element necessary for contract formation is consideration. A promise will be enforceable at common law only if it is supported by consideration or made under seal. Consideration can be anything from money to a promise to undertake or not undertake a particular act, even a mere peppercorn could suffice. “Consideration” in this context means that a promise is given in return for a promise received.

Ok, like much of the junk mail, I suspect that many of you put this in the recycling without reading it. Certainly, I doubt that more than a handful of you kept it. 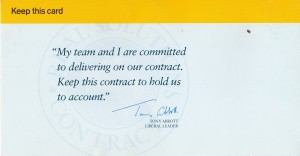 But as Abbott said that we shouldn’t trust anything he said unless he put it in writing, I thought that it might be good to have the only thing that he’d actually put in writing.

Some of you probably have an excellent understanding of contract law. Mine is limited, but I suspect that this isn’t a legally enforcable contract for a number of reasons, not the least of which is that it doesn’t spell out the options if the Liberals fail to honour the contract.

However, let’s take them at face value and examine how they’re doing so far.

1. A Stronger, Diversified Economy. Now, I’m no lawyer, but it does strike me that any attempt to sue them for breach of contract here would be doomed to fail because there’s simply four words none of which are a verb. What about “A Stronger, Diversified Economy”? We’d like one? We used to have one? Germany has one? No, there’s plenty of wriggle room here, even before they start to argue that the job losses are part of diversifying the economy and the reduction in wages is a sign of the economy’s strength!

2. Carbon Tax Gone. Hasn’t happened yet. The Liberals, of course, will blame Labor and The Greens, but didn’t Tony say that he’d have a “No excuses government”? Ok, while it hasn’t happened yet, I am prepared to believe that they’ll do it when they can. I just can’t help notice that there’s nothing in the contract about replacing it with Direct Action. Or sticking to the renewable energy targets.

3. End the Waste and Debt. Hockey’s decision to abolish the debt ceiling certainly doesn’t look they’re confident of ending government debt any time soon, but maybe it’s the ending of all debt. Maybe they’re going to abolish my mortgage by legislation which forgives all debt. If not, perhaps they should have been a little more specific. As for the “waste”, in “The Little Book of Big Labor Waste” we had sixty items listed as Labor Waste. One of them was the NBN, so if you agree that was a waste then they’ve made a start, but I’d like to know if they’ve ended the rort of Treasury getting milk for their tea. One of the others was “Jobs for Labor Mates”. With the appointments of Peter Costello, Amanda Vanstone, Sophie Mirabella and host of other ex-Liberals to government positions, I suppose they’d argue that it isn’t a waste when you appoint a Liberal. No, they’re clearly on dodgy ground with this one.

4. Build Modern Roads and Improve Services. Mm, one presumes that no government would build “old-fashioned” roads. As the statement didn’t specify how many roads, it’s hard to call them out on this, unless they build less than two. “Improve Services”? Which services? And how is improvement measured? Have services “improved” if they don’t cost as much? Have they “improved” if they’re more efficiently managed? And by efficiently, could that mean reduced in quantity. I guess they’re safe here whatever they do. Actually, the syntax of this whole “contract” varies from point to point, with some points simply adjectives and nouns, while others, such as this one, could be construed as an order meaning, “You will build roads and improve services.”

5. Securing Our Borders With Proven Policies. I guess this one is their big tick item. People said that they wouldn’t be able to turn back the boats because Indonesia wouldn’t cooperate. And Tony has said that he doesn’t need Indonesia’s coorperation. We have a right to protect our borders, even if that means towing boats all the way back to Indonesia who clearly don’t have any rights when it comes to protecting theirs. My only observation is that it was suggested that we’d buy boats from people in Indonesia – will these be the boats that the navy is putting asylum seekers on? After all, we have to run out of them eventually and wouldn’t it be cheaper to buy them second hand? But again, the language of this one is present tense, which implies an ongoing process which means that it never reaches a point where one can judge success or failure. “The borders aren’t secure yet, but that’s all right because we’re still securing them.”

6. Two Million Jobs Within A Decade. Ok, the first point is that we won’t be able to judge this by the next election – or the two after it – so it’s pretty meaningless on one level. It’s also a pretty small target over a decade, even if one assumes that they meant what most people will infer. After all, it simply says “Two Million Jobs Within A Decade” and given their form with Holden and SPC-Ardmona perhaps it’s actually two million jobs gone within a decade. Another case of “we’ll keep the promise we made, not the one people thought we made”!

So, as you can see, this contract certainly needs a bit of re-working now that Tony actually has the job. I suggest a few clauses with more specific penalties for breaches. Then of course there’s the matter of a “consideration”. What was the “consideration” in the Liberals’ Contract With The Australian people?

That’s right, whichever way you look at it: None whatsoever.