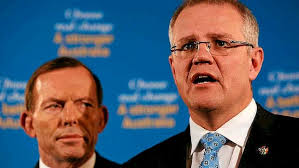 As far as I can tell, the Abbott government’s proudest achievement in its first one hundred days has been its ongoing persecution of asylum seekers arriving by boat. It has also been its most costly, and I refer you to this excellent ABC fact-checked site titled Operation Sovereign Borders: the first six months for a breakdown of the billions the government has committed to spending to maintain its “stop the boats” policy, and the mandatory detention of asylum seekers already apprehended.

What the government never admits is that “stopping the boats” is not something it can conceivably cease – as long as there are asylum seekers there will be attempts to access this country by boat.  Surveillance, interception and transfer of asylum seekers to lifeboats (which we must keep on purchasing anew as we never get them back) has no foreseeable end. Stopping the boats arriving on Australian shores is an immensely costly business, and open-ended.

Some weeks ago, the Guardian revealed that the Department of Immigration and Border Protection had inadvertently released the personal details of one-third of asylum seekers currently in Australia, possibly putting them at great risk if they return or are returned to their countries of origin. The result of this data breach is that asylum seekers may now legally claim refugee status in Australia solely on the grounds of sur place.

Eighty-three asylum seekers detained at Villawood Detention Centre have launched this action, and the directions hearing challenging the government over the data breach is due to be heard on Friday.

The DIBP have advised the Villawood asylum seekers that they are to be transferred to the remote Curtin Detention Centre in Western Australia on Thursday, the day before their directional hearing.

Last week, Scott Morrison announced that all taxpayer-funded legal aid to asylum seekers who arrive by boat would be terminated. One of the consequences of this decision is that there are no longer any free telephone interpreter services available to boat arrivals. Plaintiffs transferred from Villawood to Curtin the day before the directional hearing of their claims, will be unable to freely access interpreters to communicate with their lawyers.

According to the UNHCR, asylum seekers are entitled to legal services and to deprive them of access is a denial of justice.

This is just one of the recent examples of the Abbott government’s unrelenting persecution of boat arrivals.

There is something monstrously pitiful about a government that has as its greatest achievement the persecution of a small group of utterly helpless people. Such persecution is the hallmark of the bully: attacking those who have no possible avenue of escape, or of fighting back, and then boasting of your achievement.

Abbott and Morrison continue to bring the full weight of their contemptible authority to bear on asylum seekers who arrive by boat, and no expense is spared in the scapegoating and persecution of this group of human beings.

You may not particularly care about asylum seekers and their fate. But every one of us should care a great deal about the characters of the men who govern us when their greatest satisfaction comes from persecuting and ultimately defeating, even to the death, a human group who are amongst the most vulnerable on earth. Such men are dangerous. Such men do not deserve to govern us. Such men will not stop at one group of human beings. When this group ceases to serve their purpose, they will seek out another, equally helpless, equally unable to fight back, because bullies can only feel good when they make others feel terribly bad.