By Ad astra   What appalling scenes we’ve witnessed recently in Melbourne: its streets… 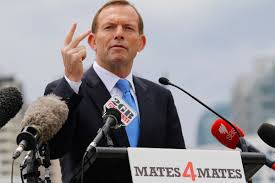 The following is an excerpt from Tony Abbott’s 2013 election campaign launch speech with an interactive report card on how he is going so far.  Click on the links to read further.

“This election is about making a great country even better; and that starts with changing [to] the worst government in our history.

Mr Rudd thinks this election is all about him.

It’s about you and how a better government can help your family and make your job more secure.

We know that a stronger economy is not about picking winners but about helping everyone to get ahead.

I want our workers to be the best paid in the world and for that to happen, we have to be amongst the most productive in the world.

From day one, it will be obvious that Australia is under new management and once more open for business.

And the motor industry will be saved from Mr Rudd’s $1.8 billion tax on company cars.

Within one hundred days, the Australian Building and Construction Commission will be running again, and the true state of Labor’s books will be revealed.

The NBN will have a new business plan to ensure that every household gains five times current broadband speeds – within three years and without digging up almost every street in Australia – for $60 billion less than Labor.

By the end of a Coalition government’s first term, the budget will be on-track to a believable surplus.

The WestConnex in Sydney, the East West Link in Melbourne, the Gateway Upgrade here in Brisbane, the North South Road in Adelaide, and the Swan Bypass in Perth will be well and truly underway.

A standing Green Army, rising to be 15,000 strong, will be working with councils, farmers and volunteers to clean up our polluted waterways and restore our degraded bush.

And the National Disability Insurance Scheme will be operating in large parts of every state.

And we won’t increase the humanitarian migrant intake until such time as it’s no longer being filled by people smugglers.

There will be no new spending under a Coalition government that’s not fully-costed and fully-funded.

By the end of a Coalition government’s first term, working with the states, teacher standards will be rising and teaching programmes will be improving.

People who are capable of working will be working, preferably for a wage but if not, for the dole.

And there will be a fair dinkum paid parental leave scheme in place, because factory workers and shop assistants deserve to get their actual wage while they are on leave – just like public servants do.

We must be a country that rewards people for having a go – but we must never leave anyone behind.

That’s why I announce today that an incoming Coalition government will finally index eligibility thresholds for the Commonwealth Seniors Health Card so that more self-funded retirees will have access to cheaper medicines.

If our vision is realised, within ten years, Australia will have lower, simpler, fairer taxes.

There will be two million more jobs, in manufacturing as well as in agriculture, services, education and a still buoyant resources sector.

We’ll have a more functional federation where the states are sovereign in their own sphere.

Public schools and hospitals will have far more freedom to be as good as their private rivals.

Childcare will be more affordable and more available to families who need more than one income and who have to cope in a 24/7 economy.

As long as I am in public life, I will continue to spend a week a year in a remote indigenous community as I’ve done over the past decade.

Over the next three years, should we win the election, an incoming Coalition government will do exactly what we’ve said we’ll do.

We will be a no surprises, no excuses government, because you are sick of nasty surprises and lame excuses from people that you have trusted with your future…

It’s performance, not promises, that will earn your respect; it’s actions, not words, that you are looking for.

You don’t expect miracles; just a government that is competent and trustworthy and a prime minister who doesn’t talk down to you.

And I’m confident that your expectations can be more than met.

An incoming Coalition cabinet will respect the limits of government as well as its potential and will never seek to divide Australian against Australian on the basis of class, gender, or where people were born.

When I look at pensioners and superannuants, I don’t see people who are a drain on the taxpayer but people who have built the country that I am lucky enough to live in.

When I look at the benefits that all Australians rightly enjoy such as Medicare and good public schools and hospitals, I don’t see “middle class welfare” but the hallmarks of a society that gives families a fair go.

But the worst deficit is not the budget deficit but the trust deficit.

This election is all about trust.

I make this pledge to you the Australian people.

I will govern for all Australians.

I want to lift everyone’s standard of living.

I want to see wages and benefits rise in line with a growing economy.

I want to see our hospitals and schools improving as we invest the proceeds of a well-run economy into the things that really count.

I won’t let you down.

This is my pledge to you.

The one thing you know is that you can’t trust what Labor tells you.

I say: give my team a chance.