Tony only likes elections when he calls for them, which reminded me of this little piece I wrote two years ago: ‘Guess what? The Liberals want an election’.

I never got around to updating it, however I’m sure that as it stands it might provide you with a bit of humour and more tellingly, trumpet loud and clear that Tony Abbott is only interested in elections when ‘he’ has a good chance of winning them. Some of the links have been removed as the sites they linked to are now ‘dead’ – most of them being to the Liberal Party’s own website, strangely.

So from the good ol’ days when Tony Abbott wasn’t the Prime Minister:

And the above was only a sample! I’d not included YouTube videos of live interviews where there had been a call for an election and neither had I searched for statements from all the Liberal politicians. Who knows how many calls there might have been from Malcolm 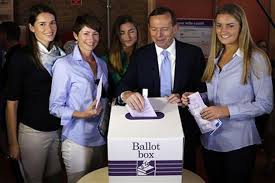 Turnbull or other prominent players. And neither had I bothered with the Nationals, of which I’m sure Barnaby Joyce would have raised the idea on numerous occasions.

We had calls for an election because of the carbon price, the Budget, The Slipper scandal, under-performing teachers, Nauru, border protection, migration, the Labor leadership challenge, Julia Gillard winning that challenge, no more distractions, the minority government, and Craig Thomson.

And on and on it went until the election was called. Until of course, when Rudd took over again and the calls resumed with vomitous regularity.

These days Tony must think the electorate is happy with the performance of both himself and his government, because, says he, it doesn’t want another election.

Truth is … Tony Abbott doesn’t want another election. Gosh, I wonder why.