John Curtin is best remembered as a war-time Prime Minister. He is routinely described as Australia’s greatest prime minister. His policy work, alongside that of his Treasurer, Ben Chifley, was crucial in establishing a welfare state, on Australian lines, designed for Australian conditions.

Curtin was influenced by the economic theories of Keynes, and he had long wanted to transform life for Australians. He had seen the real and lasting damage caused by the Great Depression of the 1930s, and took the opportunity offered by wartime conditions to transform the nation.

In 1942 he imposed uniform taxation on the states, which changed the financial relationship between the two levels of government forever. It also allowed him to increase the revenue.

The removal of the states’ individual rights to levy their own income taxes was to be compensated, by the Commonwealth ‘picking up’ their liability for social programs. This was the ‘great bargain’ he made.

With a uniform income tax he was then in a position to expand his vision of a socially activist Commonwealth Government. The states, especially New South Wales and Victoria, had been adding elements of a social safety net since the beginning of the century.

He and Ben Chifley, the treasurer at the time, between them, completed it. Early examples were the Widow’s Pension Act, and the Unemployment and Sickness Benefits Act.

In 1944 he set up the Department of Immigration which was to be responsible for organising post-war immigration to Australia. These changes were the basis for the enormous growth of the Australian economy in the post-war years. 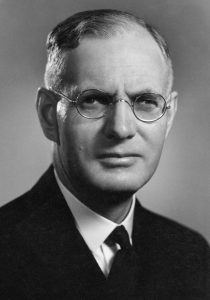 John Curtin was a believer and a doer. He was lucky to be succeeded as prime minister by Chifley, who carried on their joint project after his death.

Their aim was nothing less than the dynamic re-construction of Australia, post-war. Curtin and Chifley both maintained that the key principle of a successful re-construction was full employment.

Robert Menzies was of a similar mind. He defeated Chifley in the election of 1949, and won seven elections in a row, on a platform which included full employment.

In 1961, he was lucky to be re-elected, because the unemployment rate had ‘blown out’ to 2.1%. He won that election by just one seat.

The welfare state in Australia is under constant threat, by both sides of parliament. This is counter to the wishes of a great proportion of the population, and it is driven by a political class who, especially in recent times, look after only themselves.

They rely on the apathy of the people, who do not inspect governments closely, and who are disengaged from the political process. Politics and society are of no interest to most voters – a sad fact of life.

The “teal wave” of the 2022 election has shown a new, invigorated voting bloc, and it will play merry hell with political orthodoxy. Educated women have decided that they are not “soccer mums” or “doctors’ wives” any longer, if they ever were. They have asserted their right to be heard, and I suspect politics will be changed forever.

The Liberal Party has been ‘infiltrated’ by many IPA-type neoliberals, whose political mantra can be simplified to a “survival of the fittest” trope. The Labor Party, although not yet as badly infested with IPA ideas, is slightly less crass, paying lip service to an egalitarian ethic, while rubber-stamping much neo-liberal legislation. It leaves voters stuck between a rock and a hard place.

Watch as Anthony Albanese moves, probably slowly, to incorporate many more woman-centric and family-friendly policies. Now is the time, when the blokes of the Liberal Party are bereft of numbers, and importantly, their macho over-confidence.

Where to from here?

In the Age of Coronavirus, food insecurity, the Ukraine War and the seemingly inevitable devastation even limited climate warming will cause, we need the utmost in inclusive government, and a government released from the ideological shackles of the neo-liberal movement.

Scott Morrison was a man tied to his party, by his own strange, anti-science ideologies, and his limitless ambition. He could have formed a National Government in order to deal with the Covid-19 pandemic, but in his blinkered and political way he excluded the Opposition.

So we never had any sort of national anything. Instead we had premiers of states saving their people, while the Federal Liberals worked to pry the gates open. We had economics before people, and look at where that has landed us.

Instead of subsidising fossil fuel companies, and handing out money to billionaires, and private schools which don’t need it, try employing people. Try luring car manufacturers back to Australia, and electrify everything, including the cars we make.

Stop picking fights with China. Anyone with an elementary education is aware that China has had a short, but vexed relationship with the West.

The Opium Wars, invasions, the unequal treaties imposed by Western nations, the theft of Hong Kong; all these are like burrs under China’s saddle, and pesky states like Australia would do better than try to rile them, in pursuit of political gain. Morrison sucking up to Trump was the reason behind our current difficulties.

Stop throwing cash at multinational consultancies, and pay aged care staff and health care workers enough to live on. Stop our brightest and best scientists from leaving our barbarian land, and embrace the arts and the universities again. Build lots of housing. It is not clever to strangle supply, because all you do is drive up demand, and prices.

That is probably enough to begin with. But if you look around you, people look happier, and it has been less than a week since we delivered ourselves from Morrison’s rule.

Let us give Albanese the opportunity to be a real leader. He could really lean into the task of re-building the country, from the ground up, after the laying waste of the economy, and our society, caused by the pandemic, and the LNP vandals.

It just takes character, and a commitment to Australia’s real needs. That is why we call it the Commonwealth of Australia. Could this be his moment? We will see.