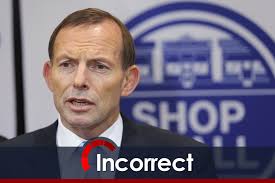 Lying in Australian politics – in particular the ‘Tony Abbott art of lying’ – has reached an unprecedented level. The Prime Minister and his cabinet are taking lying to such depths that it is not disingenuous to suggest that they no longer have a moral compass or understanding of truth.

Some time ago I wrote the following in a piece titled. ‘’Abbott Tells Another One’’:

‘’If this means I am saying he is a pathological liar then so be it. It’s not a nice thing to say about anyone but we are dealing with truth here. It’s not so much that he is a serial offender, he is. I think the electorate knows that and factors it in. The fact that he lies can and is easily supported by volumes of readily available, irrefutable evidence. (I can provide it if need be). However what is of equal concern is that the main stream media (the so called fourth estate) who are supposed to be the people’s custodian of truth, condones it’’.

Since being elected Prime Minister some political commentators have suggested he has made a genuine attempt to be Prime Ministerial. If he has it has been a forlorn attempt. He has been unable throw off a lifetime image of political thuggery, negativity and gutter speech.

As Prime Minister he has continued to lie in the fashion of an opposition that knows that its words can be lost in a mist of factual uncertainty and exaggeration. Oppositions can at times be forgiven for over exuberance. Governments and particularly Prime Ministers cannot.

It is the blatantly despicable and obnoxious manner in which Abbott does it that grates. On 12 February in question time he rose to deny that he said that he would spend the first week of his Prime Ministership with a group of indigenous people. The denial was indefensible and there would not be a member of both sides of the house who could justly defend him. Yet this flagrant misrepresentation of truth goes unreported in the mainstream media. Not to mention the misleading of parliament.

And it’s not just his lies that offend. It’s the silliness of his diplomacy when he uses phrases like ‘’goodies and baddies’’ to describe international conflicts. Or when he says Holden workers ‘’will feel liberated’’ after being sacked. Or “Let’s be under no illusions the carbon tax was socialism masquerading as environmentalism.”

When a liar continues to lie and do so with such consistency and fervour one can only conclude that he is a person that believes his own bullshit. To use an Australian colloquialism.

Really one has to wonder if he is worse than some of those extreme right wing religious fanatics that blame natural disasters on gays. When an Australian Prime Minister says Australia is spying on a close neighbor to “help our friends and our allies, not to harm them.”, you have to wonder if he needs a manager because he has been handling himself for too long.

His Ministers also seem to have carte blanche to follow his example. George Brandis when asked about Abbott’s one million jobs target blames Labor and suggests there is a wages breakout working against them, the facts say that this is not the case but there is no withdrawal. Truth is the victim.

George Brandis in the Senate makes the claim that the whistle blower Edward Snowden is guilty of putting Australian lives at risk. When the on line commentary site Crikey asks him for the evidence of this he is unable to substantiate his claim. Remember he had the gall to call Howard a lying Rodent. Then I suppose it takes one to know one.

Tony Abbott tells lies about workers benefits at Ardmona. The company refutes his assertions but he insists he is telling the truth. He insists that Cadbury is a different case in so much as the subsidy to them was for tourism. Video evidence confirms that he is lying but he rises in Parliament to repeat the lie. Remember the many company rejections of his carbon tax assertions when Opposition Leader.

‘’All we are getting from the opposition is relentless negativity and one scare campaign after another.’’

I remember Peter Reith saying something similar on The Drum not long ago and all the panellists laughed. Including the conservatives.

“Can I just scotch this idea that the Coalition’s policy is or ever has been tow-backs … There is a world of difference between turning boats around in Australian waters and the Australian Navy towing them back to Indonesia.”

Now of course we know they were both lying.

During a press conference at Parliament House, Tony Abbott was asked how it could transpire that professionally trained and highly skilled naval personnel could mistakenly sail, more than once, into Indonesian territorial waters.

We got this answer that suggests the Prime Minister could have made a fortune from writing comedy.

“Even people who are at the very top of their game… will occasionally make mistakes,” Mr Abbott replied, while praising the skill and professionalism of the Australian navy.

“On the high seas, all sorts of things happen,” Mr Abbott added.

“There are winds, there are tides, and there are other things that they’re focusing on.

YES FOLKS THAT WAS YOUR PRIME MINISTER SPEAKING

Cricketers don’t need a GPS to play a straight bat. Nor should the government.
Secrecy is lying by omission.

One lie does not justify another.

If a political party is not transparent in supplying all the information the public has a democratic right to be aware of, it destroys the very democracy that enables it to exist.

In his joint attack with The Australian on the ABC Tony Abbott had this to say.

“My concern as a citizen of our country is to try to ensure that our national broadcaster is fair, is balanced and is accurate”

At the same time the Murdoch Press was destroying the reputation of an Australian sporting legend in Ian Thorpe. The Prime Minister was silent.

Joe Hockey blames unions and wages on the demise of Toyota and reckons the company privately told him so. The company repudiates the suggestion but Joe sticks to his guns. A bit sus as we Australians are apt to say.

When Tony Abbott said this what did you think?

“You can vote Liberal or Labor and you’ll get exactly the same amount of funding for your school”.

“There will be no change to school funding under the government I lead”.

Then he made the following statement.

“The Coalition will deliver on its education election promises, not on what some people “thought” it was going to do”

I know that I am 73 and I have the odd senior moment but usually I know what I mean and what is meant by what I say. I also know that people understand what I’m meaning.

I have done a Google search for an Abbott code breaker but it doesn’t understand what I mean.

I am deeply offended when people lie to me. When the Prime Minister and his ministers do it so unashamedly and with impunity I feel shame for their incapacity to comprehend the goodness of truth. They seem intent on destroying the discernment and astuteness of how we communicate. Indeed if the necessity for truth is eliminated from relationship, debate and normal discourse then a breakdown of society is inevitable.

If the mainstream media cannot hold Abbott and the government he leads to account then they are as complicit as he in his lying.

‘’It is better to be told the absolute truth than be controlled by lies’’.

Alan Austin has also written a great piece on this subject.