When Turnbull ‘knifed’ Abbott a week ago after publically shaming Abbott’s terrible government on national television while announcing his intent-to-knife, I wondered how the mainstream media would treat this story. I couldn’t help but worry this would be yet another example of a Liberal story being treated with a completely different narrative to the same Labor story. A sitting PM is replaced by a member of their own cabinet. A late night coup. A first term Prime Minister. Abbott lasted a shorter time than Rudd and had already been challenged 6 months earlier. By my reasoning, the white-anting, destabilising activities of Turnbull and his supporters over the last 6 months was far more bloody and underhanded than Gillard taking the opportunity to lead the Labor government when it was offered to her within hours of her colleagues’ decision that Rudd’s chaotic leadership was not going to improve, second chances or not. However you argue it, overall a fair observer would see great similarities in the two situations. But these similarities are clearly ignored by the media and it turns out my worry was well founded. Low and behold, the Turnbull/Abbott story is being treated completely differently to Gillard/Rudd. Of course everyone in the mainstream media is very busy mansplaining to little-old-us the voters why the two situations are apparently completely different. But I don’t need this situation explained for me, because I can see with my own eyes that Turnbull just did to Abbott the same, if not worse, thing Gillard did to Rudd.

If you haven’t already noticed for yourself the differing tone of the stories about new-PM-Gillard with new-PM-Turnbull, take a look at this apple-with-apples comparison.

If you can’t be bothered reading these transcripts, take it from me that Gillard was interrogated about her ‘knifing’ of Rudd for the entire interview, and framed as the ‘villain’ who couldn’t be trusted, a tone which continued throughout her time as PM. Gillard was also hectored about what she would do about the mining tax policy, not forgetting she had become PM that day. Turnbull, on the other hand, was treated like a ‘hero’ and provided with the invaluable opportunity to outline his vision for the country on an unchallenged soap box where he was allowed to sell his government’s refreshed credentials. He wasn’t even tested when he claimed Direct Action was working to reduce emissions when there was no evidence backing this claim. Two interviews in similar political circumstances, yet chalk and cheese in their treatment and tone.

A simple word count showed Gillard spoke for 65% of her interview with O’Brien. Turnbull spoke for 77% of his interview with Sales. Sales even apologised for asking a question Turnbull might ‘find offensive’ and then again said sorry for cutting him off. Soft doesn’t even come close to describing this cringe-worthy excuse for journalism. But it gets worse. Check out the word clouds of both interviews and see if you notice the same thing I did.

Here is Gillard’s interview, where the most used words were obviously Prime Minister Kevin Rudd. So the main topic of the interview were Gillard’s villainous replacement of Rudd. 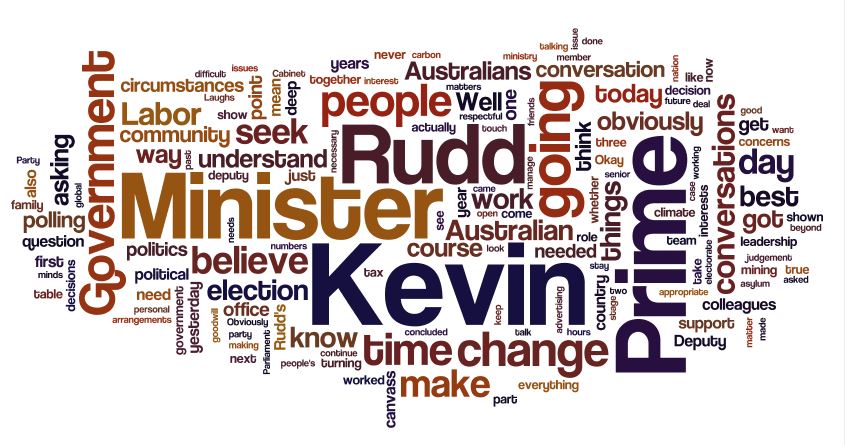 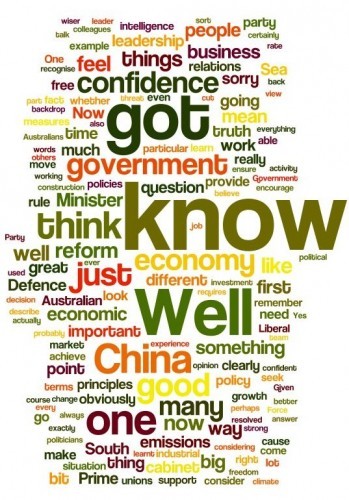 Can you see what is missing amongst all the positive words? Yep, that’s right. The word Abbott. You can do a Where’s Wally search for it if you like, but I’ll save you the trouble and tell you it appeared twice in the interview. Hardly there at all. Abbott’s already gone and the media aren’t dwelling on the part Turnbull played in his demise. Unlike Gillard, who had to put up with the media’s obsession with the Rudd leadership spill throughout her entire tenure as Prime Minister, even after she went straight to an election to prove her legitimacy in the role. Yet Abbott has been erased and shiny-Turnbull-with-a-sly-grin has got off scot-free. See what I mean about same story but very different treatment? How do you even begin to explain this other than to say Labor is always bashed by the media, and the Liberals always excused? Sadly this is the only explanation that makes sense.