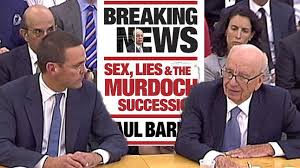 Depressingly readable is the best way to describe Paul Barry’s revealing biography of Rupert Murdoch. I placed the word mongrel in the title of this piece but it could just as easily used scumbag which means a contemptible or objectionable person.

It is a story about one man. A man with a love for money, power, influence, acquisitions, wives, children and even scandal. Scandal makes money.

Covering much of the 20th century and the early years of the 21st, it is fluent yet comprehensive, with a not-too-much-not-too-little approach to Murdoch’s life.

It is brilliantly written. Barry has a rare talent for the exposure of things complex and how to unravel them. What was depressing for me was the uncouthness of the man in question. He has obtained a vast fortune by printing smut and conditioning people to reading it and in doing so has displayed a complete disregard for the lives of others. His obsession with profit over anything else, even people’s privacy, is staggering. His business and personal moral corruption stands out larger than the worst of his tabloid headlines.

Having the power to elect governments is the ultimate power that carries with it the highest rewards that corruption can bring.

On three occasions I had to put the book down, so affronted was I by this vile nefarious excuse for humanity. One time was when one of his tabloid editors described the reason for his papers existence by saying:

“The reason we exist is to destroy peoples lives”.

I imagine writing a book about Murdoch would be challenging. One would be tempted to be caught between his remarkable business success and the corrupt means by which he has made his fortune. Page after page is filled with carefully worded analysis of Murdoch’s business methodology. How he courted favor with the highest echelons of business and government. How he implies his instructions to his editors with a nod and a wink.

In the main Barry confines himself largely to the family machinations, succession, his longevity and the British hacking scandals.

As Barry points out, while Murdoch is alive he could definitively resolve which of his children succeed him. But to do that he would have to step down and he almost certainly won’t, which gives the process the appearance of a slow-motion traffic accident. So much so that if he retains his health he could be running his split empires, News Corporation and 21st Century Fox, in 2033. By then he will be 102, a year younger than his mother, Dame Elisabeth, at her death last year.

The Murdoch succession represents one of the great transfers of wealth and power of our times. And it is of course, by virtue of a rigged shareholding. Set up to his family’s advantage.

There are some telling revelations detailing his relationship with his children that give insight into the indifference he shows to outsiders. The discarding of loyal business associates of many years standing if it suited his purpose. His disregard for the feelings of others bleeds its way from one chapter to another and one is left with an impression of a man without an altruistic bone in his body. Nowhere is this better illustrated than in his capacity to end relationships on a whim. He discards marriages as if by decree leaving emotional wreckage scattered around him.

But the main thrust of this book is in Barry’s reading of the testimony before the Leveson Inquiry. It well may be that the revelations that emerge from the inquiry and the ensuing trials might to some degree change or rewrite some of Barry’s assertions. But it won’t change public perception.

Barry begins with Murdoch telling the British culture committee at the height of the hacking inquiry: “This is the humblest day of my life”.

“Is it rehearsed? Probably not”. My view is Murdoch was on message: the line appears in his prepared statement, which he tried to table and, when this was refused, he blurted it out twice.

Thereafter Barry takes the reader on a journey that gives telling glimpses into the psychopathology that infested Rupert Murdoch’s power house tabloid; News of the World.

Murdoch was, and is, so unbelievably powerful that all he had to do was crook his finger and Tony Blair instantly jumped on a jet and flew halfway across the world to attend on him and to beg assurances of his support at the height of the 1995 U.K. General Election campaign.

Barry forensically dissects the evidence with page turning urgency and tells the whole story, or stories of people whose lives have been wrecked by the tabloid malevolence of Murdoch’s slime infested world. He alludes to many of the individual hacking instances but none are more compelling than when he asks Counsel to the Inquiry, Robert jay QC, “could I test that?” and proceeds to skilfully and deftly draw (News of the World editor) McMullan out. The gist of the questions that follow is “What about Jennifer Elliott?”

In the mid-1990s, Jennifer Elliott, daughter of famous actor Denholm Elliott, was homeless and occasionally used sex work to finance her heroin addiction. McMullan bribed a police officer for information about her whereabouts. He tracked her down, and over the following months, befriended her. He then betrayed their friendship by using it as the basis is for a series of articles in NoTW (News of the World) about her situation, ‘golden girl on the red carpet as her dad goes to pick up a Golden Globe . . . and here she is with dreadlocks covered in dirt . . . offering passers-by sex in return for money’.

Think of it. A vulnerable young woman in the thrall of addiction is living on the streets. A corrupt copper tips an opportunistic reporter off as to her whereabouts. She becomes a headline. A few years later, the cumulative effect of everything shitful in her life, including, in McMullan’s words, the fact that his media exposure had ‘absolutely humiliated’ her, takes its toll and she hangs herself.

Of all the stories of the hacking scandal victims, that of Jennifer Elliott haunts me the most.

The phrase ‘destroyed lives’ has been repeatedly used in reference to the News Corporation hacking scandal. But it did exactly that. The hacking scandal was lethal. Alexander Mosley, son of Max Mosley (who testified at the Leveson Inquiry on 24 November), escalated his drug abuse and eventually died of an overdose, unable to bear the shame of having his father reported by NoTW as having Nazi-themed sex with prostitutes (heavily emphasising the fact that Mosley’s father was British fascist leader Oswald Mosley).

British High Court Judge Eady found the Nazi theme of the reports had ‘no genuine basis at all’, when Mosley sued NoTW for breach of privacy and said ‘no amount of damage can fully compensate the claimant for the damage done. He is hardly exaggerating when he says his life is ruined’.

Then there was Charlotte Church, who after years of NoTW reports about her, including her family and her mother’s mental health issues, settled her legal action against News Group newspapers in February 2012, out of concern for what a protracted court battle was going to do to everyone’s health and well-being.

Mosley and Church’s stories get the space they deserve in Paul Barry’s book.

Author’s note. The aforementioned is quoted from another review and I have not been able to trace its originality.

Primarily though, this book is about a man at the zenith of his power. A man with money but no character, no decency, no morality, no ethics and one who will die with ‘the king smut’ as his legacy. A despicable man who traded in human vulnerability for profit.

But he is good at it if nothing else.

Paul Barry has done the world a favor by writing this book but I was left at the end with the puzzling question:

How is this man fit to manage any business?

Paul Barry has won numerous awards for his work as a journalist, including a Walkley in 2001 for an expose on tax-dodging barristers. He is a former host of The Times and Witness on Channel Seven and is currently the host of the ABC’s Media Watch. He has also been a regular contributor to the Sydney Morning Herald and the Sunday Telegraph. Barry studied Politics, Philosophy and Economics at Oxford University. A journalist with BBC TV for ten years, he came to Australia in 1987 to work for the ABC’s Four Corners, where one of his hardest-hitting reports was on multi-millionaire Alan Bond. This led to his first bestseller, ‘The Rise and Fall of Alan Bond’. Since then his books have dominated the bestseller lists, ‘The Rise and Rise of Kerry Packer’, ‘Going for Broke: How Bond got away with it’, ‘Rich Kids: How the Murdoch’s and Packers lost $950 million in One Tel’ and for Allen & Unwin ‘Who Wants to be a Billionaire? The James Packer story’.