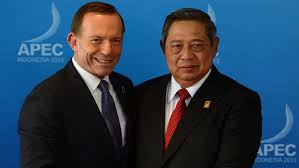 With reports that Indonesia is strengthening its military to preserve its “territorial integrity and sovereignty” and that Australia is seen as their greatest threat, this guest post from Dr Strobe Driver is timely. Those reports, chillingly, suggest that Australia’s “tow-back” policy may soon ignite conflict impelled by the Indonesia spy scandal. Dr Driver argues the ball is – and has always been – in Abbott’s court.

Professor White of the ANU Strategic and Defence Studies Centre is right in his article in The Age, on 26 November, 2013: “Abbott playing with diplomatic fire in Asia.” The level of incompetence shown by the Abbott Government in dealing with the Indonesian Government is staggering, and it will have repercussions. The repercussions to which I allude, will incrementally be enforced as China rises and in turn, as Indonesia becomes more militarily robust. The objective of the Abbott Government should be one of instilling stability in to the region and this is not encouraged by platitudes in the Parliament about who are Australia’s ‘valuable friends.’ A fundamental reason why this issue is still a vibrant one is due to the Coalition when it was in opposition, telling the Indonesian Government how it will have to regulate and/or deal with any regional problems: such as people smuggling.

To be sure, the platitudes about how borders will be ‘protected’ was to placate the domestic population of Australia and make sure Abbott was seen to be a focused and forthright spokesman; and this would have the knock-on of reinforcing Australia’s dominance in the region. There is no doubt that the current prime minister was hoping for the success the former prime minister John Howard had in 2001 with his message of “We will decide who comes to this country and the circumstances in which they come”, and of any of hoping for the same reverberation in the populace.

The grandstanding of Australia in the current circumstances, however, is fundamentally and decisively flawed as it does not recognise things are different now; and this is a most worrying aspect of the ongoing issues (and frictions) with Indonesia. Times have changed. For the Australian population to assume that Indonesia will not, and has not, gained confidence from the rise of China—a geographically close neighbour to Indonesia—and that it will always wish to solve problems that Australia has with it, is naïve in the extreme. Indonesia has grown as a nation-state since 2001. Moreover, for Australia to not understand this is now downright dangerous and will be problematic in the future. First and foremost, Indonesia is not the country it was when the (then) Prime Minister John Howard made his forthright statement, as Indonesia is now a much more politically robust nation-state, one that is keen to establish its place in the twenty-first century; and the Asia-Pacific region. More to the point, when China begins to move in to the western Pacific in a more forthright manner or in simpler terms, when the People’s Liberation Army Navy is able to establish an ongoing military presence in the western Pacific, its presence this will change all the current parameters.

The primary issue-at-hand is, Australia should not ignore this situation. Moreover, this is what a nation-state does when it has a burgeoning middle-class that wishes to reinvigorate their ‘place’ in the world and it happens on many levels: political, diplomatic, strategic, and financial to name only several key areas. Indonesia is no different than Australia was in the 1960s. As the middle-class of Indonesia become more and more astute and politically aware an outcome—and hence, a repercussion—for Australia will be that as Indonesia gains a ‘momentum’ there will be less reason for it to rely on Australia for imports and therefore Australia’s industries will be impacted upon in a negative way. One should not assume that Indonesia’s allegiance to Australia is anything beyond opportunistic—just as all country’s spy, all countries are opportunistic—and it should be admitted at this point that Australia has done little to actively promote a deeper mutual relationship with its Asia-Pacific partners in order to gain more meaningful relationships, is in fact, a fantasy.

In the future a peripheral of the rise of China is Indonesia will begin to look at its Asian neighbours with a renewed interest in terms of who will benefit Indonesia most; and the notion of mutuality will also come to the fore. Unfortunately, Australia is not enabling this process to be undertaken in the seamless way it could, and this lack of decisive action must mean Indonesia’s focus will shift toward its most powerful neighbour. The spying scandal essentially does nothing to invigorate Australia-Indonesia relations and actively encourages Indonesia to seek political union elsewhere. Spying and the subsequent sharing of information with Australia’s allies—which the Indonesians are fully aware of—will impact on Australia in the future, and whilst this may not be critical at the moment, it will exponentially undermine future relations with Indonesia. This will a prove to be at its most dangerous nature when China begins its strategic manoeuvrings in the western Pacific in the next decade. The recent spying scandal vividly portrays Australia’s deep-seated attitude to its nearest northern neighbour and it will not go unnoticed for a very long time. Now to the dangers for Australia. Are there any further dangers for Australia in the future as the relationship with Indonesia (a land of 250million+ people) when the situation continues to incrementally deteriorate? The short answer to this is ‘yes’! This can manifest in many ways, however, if Indonesia uses the spying issue to strengthen its ties with China, and with this backing decides to enforce its sovereignty within nautical boundaries, this will create ongoing problems and tension. Sounds far-fetched? Nation-states have a tendency when backed by other powerful state actors they to enforce their sovereign rights in a more decisive way. North Korea utilizing China’s support, and currently Japan accommodating US B-52 fly-overs of their disputed islands are just two examples of this happening. If What if the frictions continue and eventually there is a military clash? This is where the United States (US) enters into the scenario. To be sure, there remains a widely-held assumption that the US will come to the aid of Australia should there be a force-on-force collision with Indonesia. Assuming this would take place in current times is debatable, however, as tensions inevitably rise—especially in the next decade as China exerts its influence on Indonesia—it remains a possibility, though I would argue within the next half-decade not a probability. Nevertheless, ‘mistakes’ are often made, as the South Korean Navy will attest, with the (2010) sinking of one of its vessel’s in the Yellow Sea by the North Korean Navy.

Would the US come to Australia’s defence should an escalation of tensions between Australia and Indonesia take place? The answer to this is ‘no’! Why? The answer neatly returns to the element of opportunism. The Indonesian aircraft that were ordered by their president to cancel joint-exercise Elang Ausindo and fly back to Indonesia were US-built F-16 ‘Fighting Falcon’ strike fighters. The question that begs is, would the US immediately and unequivocally come to Australia’s aid at a time of crisis if, for instance, the Indonesian government threatened to curtail its defence budget which would impact on the sales of US strike aircraft, or sent signals to the US that is may seek to spend its defence money elsewhere? Once again, to automatically assume that the US would defend Australia is also naïve in the extreme, as the US is it is safe to argue, by definition, a very opportunistic of nation-state. Australia would be wise to exit from its past practice/s of near-contempt for Indonesia; and also of its assumptions about the US, and its role in Australia’s defence. The dynamics of the Asia-Pacific are changing rapidly and a re-assessment on the part of Australia in the milieu of geo-political preponderance is of the utmost necessity. Australia may, within the next decade, get caught between a China-US struggle for primacy in the western Pacific; commensurately find that Indonesia has sided with China, and Australia can no longer depend on US assistance. Decisive and perspicacious thinking is required by the Australian government–and quickly.

This article was first published on Geo-Strategic Orbit by Dr. Strobe Driver.

After many years of interest in International Relations his doctoral thesis examined the progress of war as a mechanism of intent and as a deliberate outcome of specific actions; and moreover, how within this framework it is able to be utilized to a position of advantage.