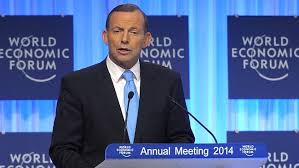 On day two of what Tony Abbott refers to as “the Davos experience”, he had what he described as “an excellent meeting with some of Australia’s most senior and important business people”. One may wonder why he has to fly to Switzerland to meet with Aussies but Mr Abbott assured us that it was “not because we love travel, but because we want to do the right thing by the people, the workers and the businesses of our country.” He explained the purpose of the meeting in a press conference:

“The interesting thing about my discussions with Richard Goyder of Wesfarmers, with Nev Power of Fortescue, with Gail Kelly of Westpac, and with David Thodey of Telstra is that …. the leaders of those businesses are here at this conference because they want to ensure that right around the world we have got the policies in place which are going to promote private sector-led growth, investment and employment. What that requires is sensible government which gets taxes down, which gets regulations down, which gets productivity up because if we can do all those things we get growth up and that means more jobs and more prosperity for our people.”

So do these business leaders want prosperity for all?

“The primary objective of Wesfarmers is to provide a satisfactory return to its shareholders.”

It is one of Australia’s largest listed companies – a conglomerate with many ventures including Coles supermarkets, coal mines, chemicals, energy, fertilisers, and insurance.

Two months after the election, Wesfarmers chief Richard Goyder sent a clear message to Canberra not to interfere with the nation’s supermarket sector, warning that an attempt to cap the market share of Coles and Woolworths would lead to higher prices for shoppers.

Coles and Woolworths, who currently enjoy an estimated combined grocery market share of about 70 per cent, are concerned that government may one day try to push through caps on market shares to open up competition from chains like Aldi and Costco. The ACCC has promised investigations into Coles and Woolworths for alleged treatment of farmers and suppliers, as well as shopper-docket schemes for fuel discounts at supermarket-owned petrol stations.

Mr Goyder said he gets

“a bit perplexed when Coles is blamed for many of the challenges in the farming/food sector today. The farming and food industries do have challenges today, as they have had for many years. They are not helped by our strong currency, as well as productivity issues and cumbersome regulations. But, it is just too easy, too simplistic, to blame the supermarkets for a lot of these difficulties.”

Wesfarmers have also been actively expanding production and purchasing new coal mines despite the falling price of coal.

In a statement to the Australian Securities Exchange, Wesfarmers said total coal production in the December 2013 quarter was 3.7 million tonnes, a 6.8 per cent lift compared to the 3.5 million it produced in the December 2012 quarter.

Wesfarmers said in a separate statement it had agreed to acquire a mineral development licence from Peabody Energy for $70 million. The group said the purchase will increase the total base of coal reserves available at Curragh by 29 per cent and reflects confidence in the long-term outlook of its export business.

Another arm of Wesfarmers is CSBP, a major manufacturer and supplier of chemicals, fertilisers and related services to the mining, minerals processing, industrial and agricultural sectors. Along with their affiliated companies, their products include

No wonder Mr Goyder is keen to get rid of “cumbersome regulations”. They could be a hindrance to “satisfactory returns”.

Whilst seemingly unable to say anything sensible about Syria, and sticking to his “Don’t mention the whales” stance with Japan, Mr Abbott has found time to consult with the miners and bankers on how to increase their superprofits, and with the supermarkets and Telstra on how to protect their monopoly markets.

Mr Abbott’s aim may be to see “more prosperity in Australia” but for whom, and at what cost?