In 2013 former Prime Minister, Tony Abbott commissioned Andrew Forrest to do a review about Indigenous training and employment services. Creating Parity – The Forrest Review, was released in 2014.

It was overseen and authored by Andrew Forrest’s Minderoo Foundation, the big four banks, Coles, Woolworths, and many others. In 2017 while the calls for a banking royal commission were getting louder, the Minderoo Foundation invited senior executives from the banking and retail sectors, to attend a CDC Innovation Day.

This was primarily “to create a roadmap for the development and implementation of an ‘item-level (SKU) blocking’ solution, and to solve other issues hindering the card’s acceptance, functionality and scalability.”

The Innovation Day participants formed a working group to help Andrew Forrest produce his Cashless Debit Card Technology Report. If you read through the report it’s clear that it’s a meticulous plan for the government to implement. 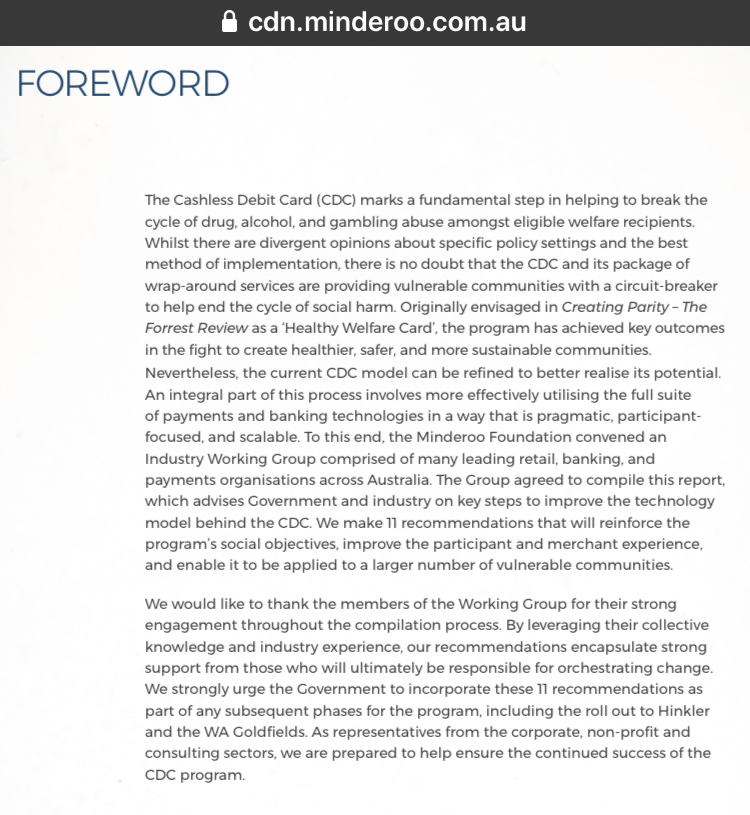 A large scale rollout of the cashless debit card has always been the plan. This was made very clear in the review and the report. The cashless debit card (CDC), trials in regional areas to date have been managed by Indue Ltd, to give banks and retailers time to get their systems ready. The biggest problem for them to circumnavigate was the blocking technology. There has been so much focus on Indue, and the alcohol and drug narrative, that the banks taking over social security payments hasn’t received enough attention.

It was only in September last year (seven months after the Final Report of the Royal Commission into Misconduct in the Banking, Superannuation and Financial Services Industry, release), that the government started to mention them when they said that they were, “working with banks and business to iron out issues with the card’s use in stores, improve mobile phone payment technology and to merge the quarantined cash system with regular bank cards.” It’s only been two months or so since the latest bank scandal was revealed, this time it was Westpac accused of over twenty-three million breaches of anti-money laundering laws.

Before we go any further, it’s important to remember that because of the changes to social security laws to allow the CDC trials to occur in the first place, the eighty percent of the social security payment that currently goes to Indue to dole out, makes it the legal property of Indue. If we allow the banks to take over, billions of dollars will be technically owned by them. Activating the CDC is considered consenting to the trial, whether you want to or not, you have to have a contractual relationship with Indue, and agree to their terms and conditions. Because Indue is technically not a bank, legality wise, how will this work if the banks take over? Indue aren’t signatories to the Centrelink Code of Operation or the ePayments code, does the legislative tweak for Indue also cover the banks? 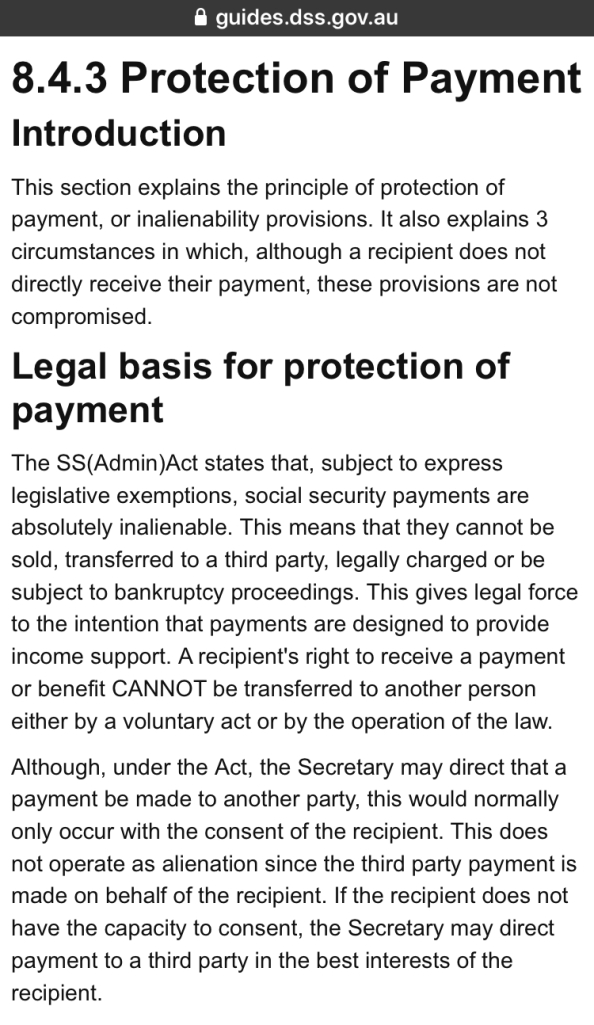 The key points of the new changes are –

The last two points mean that the government is not even pretending that they’re trials anymore, that’s what the evaluations and reports are for. It also makes it easier to rollout across the country.

The push is on…

At first the narrative peddled by the government and much of the media was that the CDC trials were to tackle alcohol and drug addictions, then it morphed into unemployment. Now that the push is on to roll it out into the cities, it’s being promoted as a “financial literacy tool”.

“The reason we haven’t done it in the major cities is because we need to deal with this technology issue, which we are now close to resolving,” Anne Ruston told The Sydney Morning Herald and The Age.

“For this to be a mainstream financial literacy tool for Australia it does need to be rolled out away from just rural and regional communities, and that’s the conversation we need to have with the Australian public over the coming months.

“It does need to have a broader application than perhaps the social harm reduction that the original policy was designed on.”

Nine newspapers to date, have reported the same information as above.

“People on social security know better than most about budgeting and don’t need the federal government to teach them,” ACOSS CEO Cassandra Goldie said in a statement on Saturday.

“The cashless debit card costs thousands per person to administer. This is a waste of money going to the big banks. These public funds should be going towards increasing Newstart.”

There are more middle-aged Australians on Newstart than ever before, it’s not their budgeting skills that have led them there, it’s a lack of jobs and ageism. People aged between forty-five and sixty-five now make up half of all unemployment support recipients, and sixty-five percent of Australians receive some form of Centrelink payment.

The banks flex their muscles in the social security sector

Banks now refer some of their customers to Foodbank in an attempt to help them budget so that can pay off their mortgages. Nearly half of all homeowners aged fifty-five to sixty-four are still paying off their mortgages, it was only fourteen percent, thirty years ago. It’s a shame that we can’t look at the root cause to fix things rather than band-aid solutions involving charities and banks, isn’t this what governments are for?

The Commonwealth Bank of Australia (CBA) has a new app called ‘Benefits Finder’. It’s an app that helps customers find money that they’re entitled to but have not claimed from the government. The app is identity driven and can tap the government’s biometric database of people’s digital identifications to assist it. I mention this because by becoming an identity broker they ‘could, in the near future, allow claims for social security benefits to be made from within a banking app.’

I think that things like this need to be talked about in the open and not behind closed doors.

Australia is nowhere near ready to be a cashless society, it may never be

Some may argue that the banks taking over could be a good thing because of all the dramas that those on the CDC trials have had with Indue missing payments etc. Even without taking into account the revelations from the Royal Banking Commission, and recent scandals, do we really want the banks which are profit based, involved in social security and matters that concern our most vulnerable people?

They’re also not fool proof, they have outages and things go wrong on a regular basis. Heck, technology itself is not the be all and end all as we saw during the heartbreaking bushfires. ATM’s were out, people were forced to steal food, and petrol and there was chaos in supermarkets, because people couldn’t access cash.

What else is on the horizon?

Back to The Forrest Review, the NDIS gets mentioned: ‘have the scope to expand to accept other government payments such as funding for care packages under the new National Disability Insurance Scheme.’

Work-for-the-dole too: ‘operating the government’s policy of Work for the Dole on a commercial basis so that tax free status can be used as an incentive to move organisations from a social enterprise to a profitable business that employs the most disadvantaged job seekers.’

Even Palantir: ‘Big data mining with specialist fraud firms like
Palantir Technologies has proven extremely efficient at identifying fraud in a manner that the cash system has no hope of replicating.’ If you’ve not heard of Palantir, there’s a link at the bottom of this page for an article that I’ve written about it.

It’s also of note that original plan was for the CDC to be completely cashless.

Why are we allowing a mining billionaire, banks, and corporations to write and implement social security policies for the government? Is any of this even legal? Or is the government banking on nobody caring too much about it? These and so many questions need answering urgently.

The data collected from this is also worth a serious amount of money, not only that, the information collected could be used against us, to control us, to watch and monitor us, a terrifying thought, I know. This is why we have rules, regulations, and laws to protect us. If we just keep letting things like this slide, Australia will just be a mini-America, where corporations and the elite profit from the miseries of others, and essentially, run a government that benefits their interests.

The Standard That You Walk Past: https://melmacpolitics.com/2017/09/20/the-standard-that-you-walk-past/

Authoritarianism Creep, it Affects Us All – Part1: https://melmacpolitics.com/2019/12/04/the-cashless-debit-card-is-part-of-authoritarianism-creep-which-affects-us-all-part-1/

Australia, We Need to Have an Urgent Chat About Surveillance Technology and the Race For Marginal Votes: https://melmacpolitics.com/2018/04/26/australia-we-need-to-have-an-urgent-chat-about-surveillance-technology-and-the-race-for-marginal-votes/

Link to Part 1: The Cashless Debit Card is part of Authoritarian creep, which affects us all

This article was originally published on MelMac Politics.